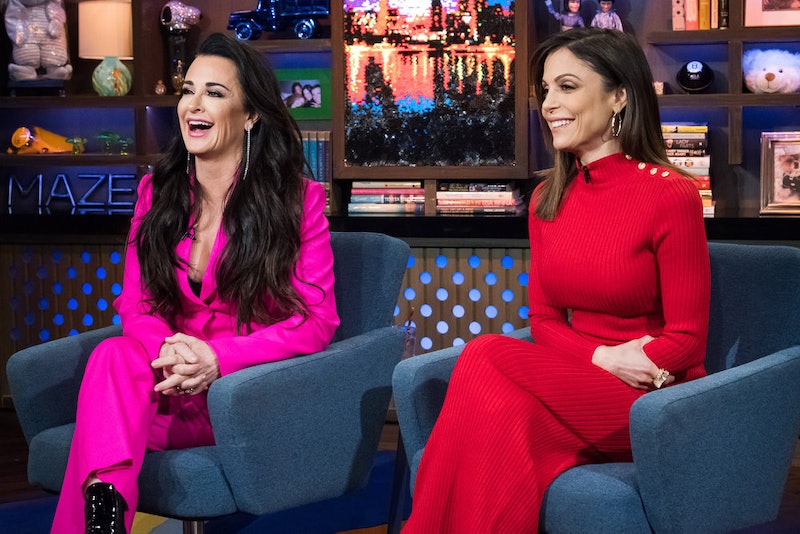 The Real Housewives franchise is the gift that keeps on giving. From merchandise to songs to memes, and even the episodes themselves, these women have made an undeniable impact on pop culture. That's why it's so exciting that Watch What Happens Live With Andy Cohen will have six OG Real Housewives stars on a holiday episode, but there's still one question looming — everyone wants to know where Lisa Vanderpump is.

Andy Cohen revealed a promotional photo for the special "O Come OG Faithful" WWHL episode, airing Dec. 20, on his Instagram and Twitter on Nov. 30. It's a clever title, but that's not the element that sticks out. Kyle Richards, Ramona Singer, Vicki Gunvalson, NeNe Leakes, Bethenny Frankel, and Teresa Giudice are all included, but there are two big names missing: Luann de Lesseps and Lisa Vanderpump. All the women listed are original cast members, who are currently still on their shows.

Before diving into Lisa's obvious absence, let's address Luann's. Luann will be on tour for her Countess & Friends cabaret show. According to Ticketmaster, the New York housewife does have a show on the same date, but it's in New York City, which is where Watch What Happens Live tapes. Not only that, but it has a 7 p.m. start time. WWHL tapes at 11 p.m., so maybe, just maybe, Luann can finish up her show and pop in for a surprise cameo.

And now it's time to address Lisa's apparent exclusion. Lisa was an original cast member on RHOBH. So was Kyle, who's part of this special. It's not even as if the episode includes one person from each show, which could justify Lisa's absence, since Bethenny and Ramona will both be there to represent RHONY.

So where in the world is LVP? That is the question of the moment. Plenty of fans commented on Andy's Twitter announcement.

If the Bravo fans are anything, they are dedicated and passionate about the programming. It's really not surprising that so many have shared their opinions. However, this tweet isn't the only post fans commented on.

Beverly Hills viewers questioned Kyle for being on the WWHL episode without her costar when she tweeted a link to her Instagram post about the OG special.

It was a pretty innocuous tweet, but some Twitter users really went in, asking about Lisa's absence.

Given all the critical feedback on Twitter, it makes sense Kyle shut off the comments on the actual Instagram post, which isn't a typical move for her.

As for why Lisa isn't part of it, there are no answers currently. However, there's a lot of speculation about Lisa's absence on RHOBH, which might have something to do with the lack of Lisa on WWHL. Just scroll through the recent group photos from the cast on Instagram, and she's the only one consistently missing.

The ladies went to France for the RHOBH cast trip. Zero sign of Lisa. Lisa was not at Camille Grammer's wedding in Hawaii, even though Kyle did insists that Lisa was invited.

Lisa addressed her MIA status on Real Housewives of Beverly Hills during a November interview on The Talk. The OG admitted,

"This season was very difficult for me... I kind of floundered this season."

She also confessed, "I'm in most of the season, but it got a little bit complicated." Could that have anything to do with her absence on the Watch What Happens Live OG episode?

Fans are going to need some sort of resolve here. Will her absence be addressed? Will she make a surprise appearance? As the title suggests, we'll just have to "watch what happens live" to see how it ends up.

More like this
Everything To Know About 'RHONY' Season 14
By Jake Viswanath and Alyssa Lapid
Everything To Know About Danna Bui-Negrete From 'RHOSLC'
By Jake Viswanath
We’ve Got A Text! Another 'Love Island' Series Is On The Way
By Darshita Goyal
Meet Jungle Runner-Up Owen Warner's Equally Handsome Brothers
By Sam Ramsden
Get Even More From Bustle — Sign Up For The Newsletter