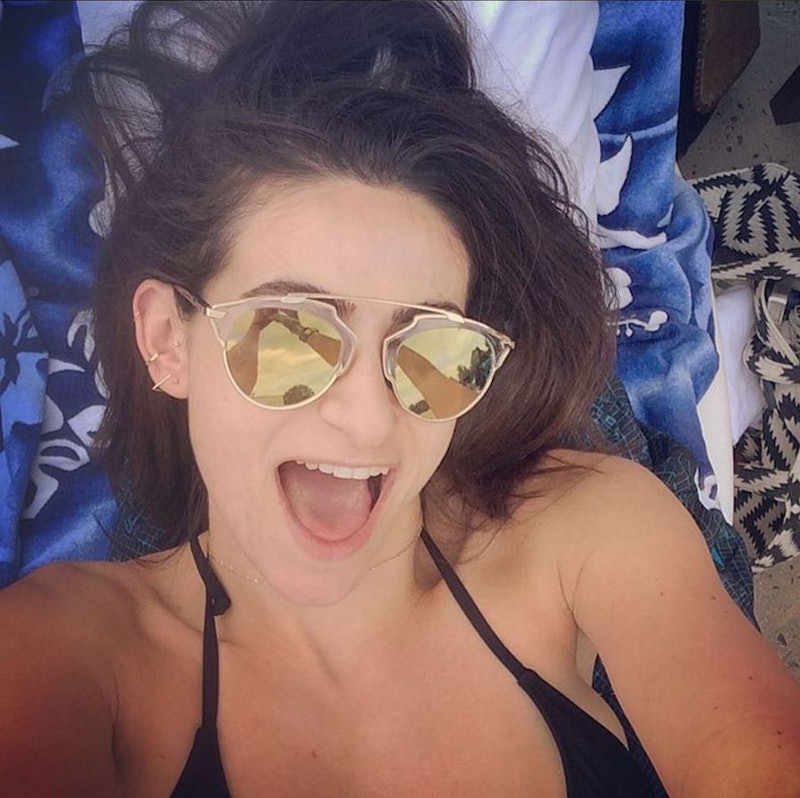 Even though dating apps are most popular among Millennials, according to a recent Bustle survey with dating app Happn of over 1,000 dating app users, 78 percent of women and 85 percent of men still want to meet people IRL. That's why for the second year in a row, Bustle is deeming April, "App-less April" and encouraging our staff and readers to delete their dating apps for 30 days and meet people the old-fashioned way: offline. With participants tracking their progress and tricks and tips from dating experts, we'll be helping you feel empowered to meet people IRL all month long.

I've never quite jumped on the bandwagon of dating apps — I tried to download one once as an experiment, but I just couldn't get my fingers to tap the button. However, if you're into the world of swiping, dating can seem like a fun, confidence-boosting game of picking and choosing people you like or don't like, sending them into the cyber abyss, never to be seen or heard from again. If you don't like the way a person portrays themselves in a picture, all you really need to do is swipe left and continue the search until you can swipe right, and ding! — now you can begin the dating game. Sure, dating itself in IRL is a game and by no means easy, but dating apps have taken it to an entirely new level — and it's a game that I've never allowed myself to play.

I don't know about you, but the thought of someone looking at my profile picture and info on a dating app and having them outright reject me without knowing a thing about me, like how my voice sounds or the confidence I exude in person, sounds so savage to me. Sure, you can just as easily be rejected at a bar or a coffee shop or at any place human being congregate, but being rejected in such a shallow manner feels so wrong, almost inhumane.

As much as I personally reject the idea of using dating apps, I respect others who use them and I accept that dating apps are not going anywhere any time soon. I have to admit that I do know several people who have said that dating apps have worked successfully for them, so I do understand the desire to use them. That being said, it's somewhat comforting to know that I'm not alone in choosing to date the old fashion way, IRL. According to a 2,373-person survey conducted by Mic in 2016, more 18 to 34-year-olds met their significant other through mutual friends than through dating apps.About 39 percent of respondents said that they met their S.O. through mutual friends, and 22 percent said that they met their S.O. while they were out and about in a social setting. The survey made me happy to hear that the majority of people are still making their initial connections in the flesh.

According to the Pew Research Center's research published last year, though 59 percent of Americans view online dating as a great way to meet people, 10 percent of respondents prove that meeting people IRL is the preferred way for most, saying that they met their S.O. through an app or site. Pew's research also focused on the online dating habits of both younger and older millennials, finding that about 1-in-5 18 to 24 year olds, or 22 percent, now report using mobile dating apps, which is a significant increase from 2013, in which only five percent reported doing so. Though it is a large jump, it still represents less than one-fourth of that particular population, which leaves me with hope for the future that dating IRL will prevail.

Here are some more reasons why I have never used a dating app and never will.

I totally get that we live in a time where there's no escaping technology. There's an app for everything, and if you really wanted to, you could take care of a day's worth of errands never having left the couch. That being said, just as I am a firm believer that humans weren't designed to sit in front of a computer screen all day (though sadly most of us can't avoid it) I cannot accept dating via apps. It just feels unnatural to me to pick a date or a hookup that way. I will stick to the basics of face-to-face communication.

"Interacting in person makes people step up their game to be on their best behavior, which is a win-win for everyone involved," Camille Virginia, Founder of Master Offline Dating, tells Bustle. "Because adding a small barrier to a situation — like the risk of rejection in a public setting — instantly separates those who truly want something (and are willing to go for it) from those who didn't really want or value it in the first place. And deleting your apps can be just the push you need to start engaging like that in real life."

Behind the safety and comfort of a computer and phone screen, anyone can say anything and portray themselves in any way they wish — something you couldn't possibly do during a face-to-face conversation in a social setting. Consider it the dating app facade — you're almost portraying the best version of a fake you. How many times have you seen Facebook and Twitter rants of the craziest, most ridiculous things you've ever heard? When you can hide behind a screen, anything you wouldn't normally say to another human being you can say almost without consequence. It practically begs for ridiculous behavior.

What's more, your profile picture can look nothing like you, and you can say anything you want about yourself. In other words, any one can lie, and from what I've heard, it happens more often than not. In fact, according to a 2017 survey of over 500 U.S. singles by ReportLinker, the two biggest drawbacks to online dating are that people aren't serious on them and that people lie.

I absolutely love the rush of meeting someone new in person, and the butterflies that come with flirting and attempting to say the right thing. Dating apps do not give you that same rush of seeing someone from across the room or meeting someone online at Starbucks. Seriously, how can anyone be attracted to someone or even desire to go on a date with someone from just seeing their picture? I am never fully attracted to anyone I meet right away; most of the people I've dated and fallen for have grown on me, after having gotten to know them for a while.

Being asked out on a date in person, or asking someone out in person is so amazing — trust me! While I completely understand the desire to be in a relationship, as well as the desire to just hookup, instead of reaching for your phone, put yourself out there in person — you'll feel a million times better and your confidence will soar.

The whole idea of dating apps is basically using them as an initial filter, basing your choice primarily on looks, or something superficial that you saw on their profile. This all happens before you even get the chance to know a person — you're basically tossing them away before you get to know their personality. They could be the most wonderful, and funny person you've ever met, but you didn't even give them a chance — you tossed them away because they didn't fit into the superficial category of your 'type'. If this person walked up to you at a coffee shop, and you at least heard their voice or tone or what they had to say, perhaps you would have entertained the thought, or at the very least have given them a chance to take you out. As my mom always says, there's more to life than looks, especially when it comes to who you fall in love with. Be open and give people a chance. Don't throw them away.

The more choices we have in choosing a partner, the more difficult the choice can be, because we're always looking for the next best thing or the absolute ~perfect fit~. It's unclear if that even exists, yet we continue to look. While for some people the endless choice that dating apps provide works well for them, but for others the more options you have the harder it is to chose, and that can be a pretty overwhelming and frustrating feeling. "The process of several serial dates with people that you lack chemistry with or experience rejection from people that you think are potential candidates can be very frustrating and result in online dating fatigue," Clarissa Silva, behavioral scientist and author of the relationship blog, You’re Just A Dumbass, tells Bustle.

Whether you date IRL, use apps, or are taking a dating app break for Bustle's App-less April, a challenge to delete your dating apps for a month, dating is rarely easy. Dating apps haven't seemed to change that, but if they ever do, then maybe I'll reconsider.