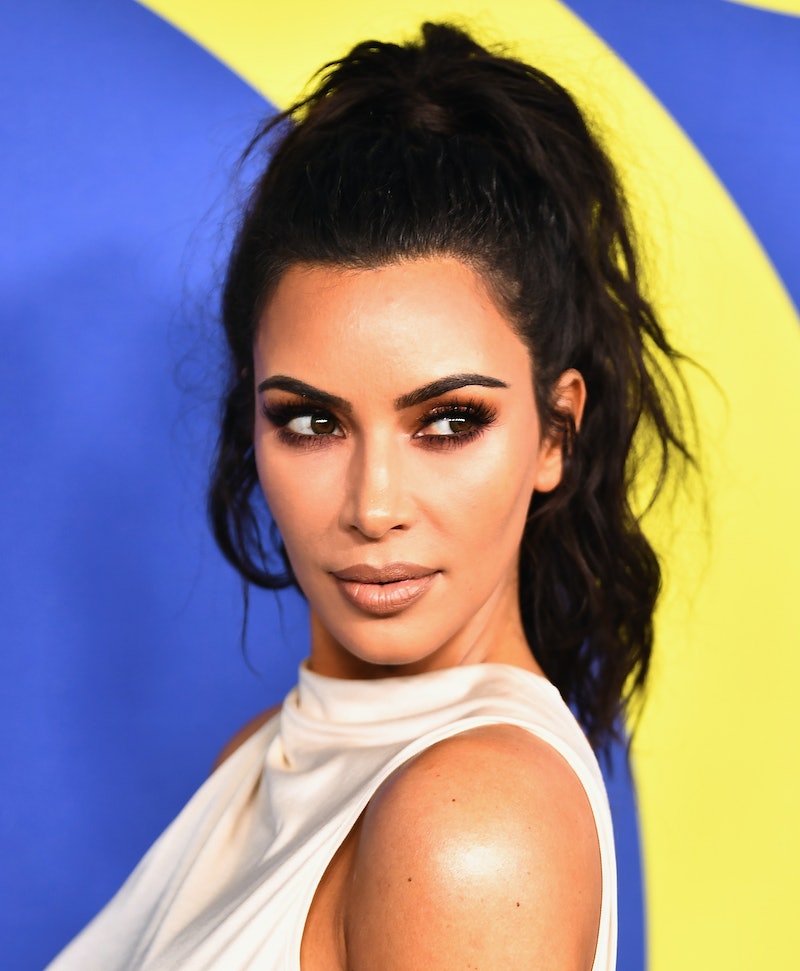 As you might've heard, Khloé Kardashian's birthday party was special because of one notable occurrence: Tristan Thompson finally unblocked Kim Kardashian on Instagram. After the bash, Kim explained the Thompson unblocking situation in an interview with Extra. And, honestly, the reason she asked him to unblock her makes so much sense.

In her interview published July 1, Kim explained she really had no choice but to ask the Cleveland Cavaliers player to unblock her. Basically, it was too awkward of a situation to avoid at such an intimate birthday party. "I did [the video] just spur-of-the-moment," Kim told Extra, "I was like, ‘Wait a minute, you have your phone out and this is really awkward 'cause you blocked me.'" It's probably a good thing she did straight-up ask him to unblock her, otherwise their evening could have been totally awkward, to say the least.

She continued to say that, since they were all hanging out together at the same event, she just had to bring up the elephant in the room when it came to the block heard around the world. Kim told Extra, "'What’s up? We’re all in the same room again, can I get a follow, can I get an unblock at least?'" The KKW Beauty mogul also said that Thompson didn't know she was going to ask him about the whole thing (on camera, no less). "I had to do it, I had to," Kim said. It's not like they could have made amends if she was still blocked on Instagram, ya know?

In the spirit of Khloé's birthday, Kim posed a fun question directly to her followers, "All right guys, what do you think? It’s Khloé’s birthday, should I ask this guy to unblock me?" The Cleveland Cavaliers player was totally down to make amends (as was everyone else in the background, including Khloé, who was loving this interaction). "For Khloé’s birthday it’s only right,” he replied, “I got you.”

When she later asked him, "Was that a yes?," he applied in the affirmative with, "Sí.” To make sure that he went through with it all, Kim had he phone locked in to the exact moment that Thompson finally clicked the unblocked sign on her Instagram account. So, it appears that all is well with the world, at least as it concerns everyone's social media accounts. But, things weren't always going so great between Kim and Thompson, in particular.

What caused him to block her in the first place? Well, it may have had a little something to do with Kim's appearance on The Ellen DeGeneres Show back in April. While her other family members had stayed mum about Thompson's alleged cheating scandal, the reality star went a different route during her time on the talk show. When asked about Thompson, Kim said, "Like, I don't even know how to describe it besides it's just so f*cked up." It was a pretty bold statement. (When the cheating rumors first broke, Bustle reached out to reps for Khloé and Thompson for comment, but did not hear back.)

But, it didn't seem as though the athlete was appreciative of her boldness. When the reality star appeared on Live With Kelly And Ryan in May, she hinted that her comments got her blocked on Instagram by a certain someone. She told the hosts, when asked how her sister is doing after all of the drama, "Last time I went on TV and answered some questions about her, I got blocked on social media. And not from Khloé."

Thankfully, the whole Instagram block situation seems to just be water under the bridge between the pair. And now, thanks to Kim for openly bringing up the subject, they can put any awkwardness behind them.