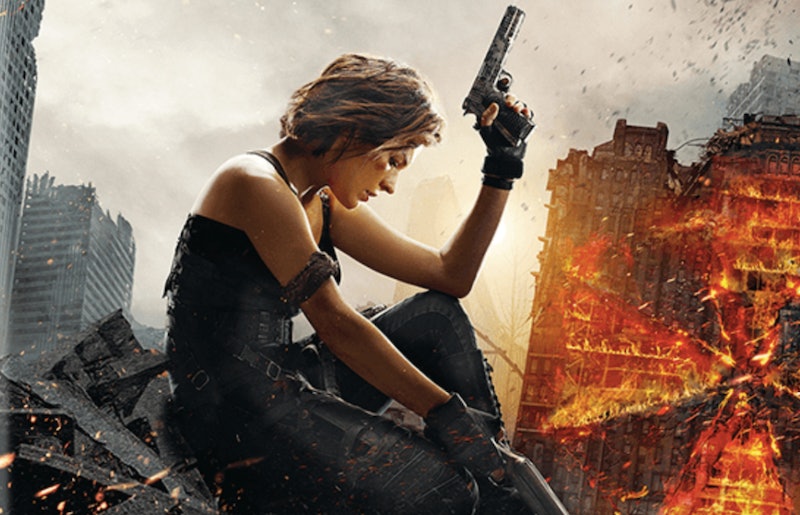 The day before the Blu-Ray & DVD release of Resident Evil: The Final Chapter on May 16, I hop on the phone with franchise vet Ali Larter, who tells me a little story. When going to Cape Town to shoot Final Chapter, her third film in the RE franchise (also the sixth and last overall), she had a toddler son and a six-month-old baby girl on her hip. Meanwhile, she was getting her hands dirty doing stunts and gun work on set.

"[Milla Jovovich and I] were down there kicking ass, doing our fight scenes, [then] breaking for lunch, and we're there with our babies," she recalls. "There was something really incredible about the juxtaposition of that. You can't put people in a box," Larter explains. "Women can be anything they want to be." Thus, she unintentionally describes Resident Evil and its can-do attitude in a nutshell.

Since the release of Resident Evil in 2002, the franchise has become a worldwide phenomenon, earning its status as the most successful video-game-based film franchise ever. In the days before The Hunger Games, Divergent, and arguably Frozen, female-led action flicks were harder to come by. There was Lara Croft in 2001 and the 2000 remake of Charlie's Angels, among a few others. Larter, who's been in the business for years, sheds some light on the sole, behind-the-scenes factor that's allowed RE to pave the way.

Written, directed, and produced by Paul W. S. Anderson, the films star Jovovich (Anderson's real-life wife) as Alice, a woman fighting evil forces in a post-apocalyptic world after the "T virus" was released, killing millions. In these films, women aren't the sidekicks or the comedic relief, they're the main attraction, and they have been through all six films. Larter tells me how fans, both male and female, recognize and love that. "I've had people line up that just feel so empowered by it. That's something I never expected. It's been so rewarding," she says.

While Larter "definitely believes" the films are feminist, she didn't necessarily consider that at the onset of joining. "When I signed onto this, I wanted a chance to play a character within an action movie that wasn't a girlfriend, that wasn't someone there just to build someone else up," she says. A huge draw was her character Claire's relationship with Alice. She explains:

It's typical to see men in both of these roles. Here we are, three movies later together, [and] you see them build each other up. You don't see the cat-fight, you don't see us fall into those traps you often see in movies. You also rarely see two women leading a movie and doing that. There's no question to me that that kind of feminist point of view on it.

And while all of this is exciting and progressive change for women, Larter brings up the point that it is still Hollywood, and Hollywood talks money. While many may have assumed male-led action films would perform better than the films of the RE franchise, this isn't necessarily the case.

"In the end, Hollywood's a business," Larter says. "It needs to show these movies can make money, especially with female leads. And they did."

The box office records are behind Larter's claim, as worldwide numbers for each installment have exponentially exceeded the one before (excluding Retribution). The original opened making over $103 million worldwide, the preceding Apocalypse made over $125 million, and the most recent Final Chapter brought in over $300 million. The franchise has made over $1.2 billion worldwide.

Resident Evil's empowering message would only go so far if people didn't tune in. On the contrary, fans all over the world immediately adored the films and proved there's a massive audience and thirst for female-driven horror and action films. As Larter states, "People are open to seeing women in these roles and it's limiting to think there isn't that audience... They love seeing women kick ass."

And kick ass is what they do best. Larter gushes over the gun training and stunts she performed in this final installment. "I absolutely adored getting physical. This isn't a dialogue-heavy movie," she says. "This is about showing your physicality. It's the end of the world, your body has to be lean, you have to be strong."

And of course, after kicking the bad guys' butts, they'd go back to their real-life babies. "We're out there performing one thing, but we can still be mothers. You never need to limit yourself," the 41-year-old tells me.

At the end of our chat, Larter says she'd support her kids if they wanted an acting career like their mom's. "I want my kids to do whatever makes them happy. But if they get into this business, it'd be important to me that they understood the process, from production all the way up," she says.

One thing's for sure, they'd be learning from the best.