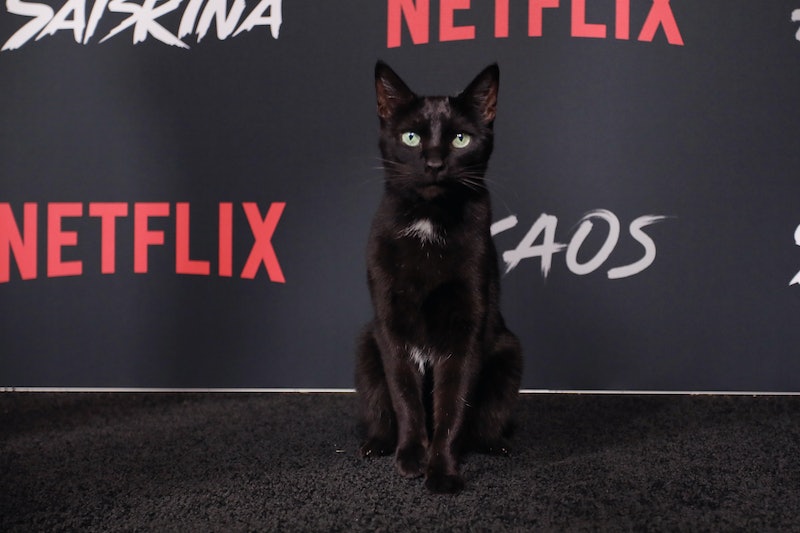 It's been well-publicized that Netflix's Chilling Adventures of Sabrina will be a far cry from Sabrina The Teenage Witch, the Melissa Joan Hart-led sitcom that charmed fans back in the '90s. This version is darker, spookier, and a heck of a lot scarier, featuring genuine thrills in lieu of light-hearted humor — at least, if it lives up to all that the creators have promised. However, one of the most surprising changes comes in the depiction of Salem on Chilling Adventures of Sabrina. Gone is the wise-cracking feline of Sabrina past — in his place, a silent protector.

One of the defining elements of Sabrina The Teenage Witch was the presence of Salem as a sardonic talking cat, voiced by show writer Nick Bakay. Salem's talkative nature was new for the character, who had been an orange and non-speaking in the Sabrina comics up until that point. Following the show's debut, however, both the talking and the all-black makeover were carried over into the Chilling Adventures Of Sabrina graphic novels, on which the Netflix series is based (They're written by showrunner Roberto Aguirre-Sacasa, who began publishing them in 2014). So why would a show like Chilling Adventures, made by the same team behind the famously extra Riverdale, turn down the opportunity to have a talking cat?

The first and most obvious explanation is that Salem in Chilling Adventures is being portrayed by real cats, as opposed to being simply drawn in comics or portrayed by a puppet like in Sabrina The Teenage Witch. Obviously, real cats can't talk, meaning that finding ways to have Salem communicate with those around him would have been difficult. Even if the show attempted to utilize voiceovers to give Salem the ability to speak, it likely would have come across clunky (and also expensive, as they'd have to use some special effects to make it look as though the cat's mouth was moving).

Furthermore, there's been some on-set drama between Chilling Adventures star Kiernan Shipka and the many cats that portray Salem — specifically, Shipka discovered while filming the series that she is allergic to cats. During a September interview, Shipka told Vulture that when she picked up one of her co-stars for a scene, she broke out in hives. So while Salem's lack of speech may have been intended from the series' start, the fact that the show's lead has trouble even being in the same room as the character suggests that he'll probably remain silent for the entire series, as to not make things more difficult for her.

So for those hoping to see Salem once again serving up sass on-screen, unfortunately, you're out of luck for now. But though Chilling Adventures may not feature a talking cat, the show's trailers suggest that there is plenty of magic and weirdness present to make up for it — even if it doesn't come with the same whimsy Teenage Witch fans fell in love with.

Chilling Adventures of Sabrina Season 1 is set to arrive on Netflix Oct. 26.

More like this
Nicola Coughlan Shared A Lady Whistledown Excerpt From ‘Bridgerton’ Season 3
By Grace Wehniainen, Alyssa Lapid and Sam Ramsden
Netflix Reveals First Look At Wednesday In The 'Addams Family' Spinoff Series
By Bustle Editors
What Does Nancy Jo Sales Think Of 'The Real Bling Ring'?
By Arya Roshanian
Kate Bush Revealed The Real Meaning Behind 'Running Up That Hill' Lyrics
By Darshita Goyal
Get Even More From Bustle — Sign Up For The Newsletter