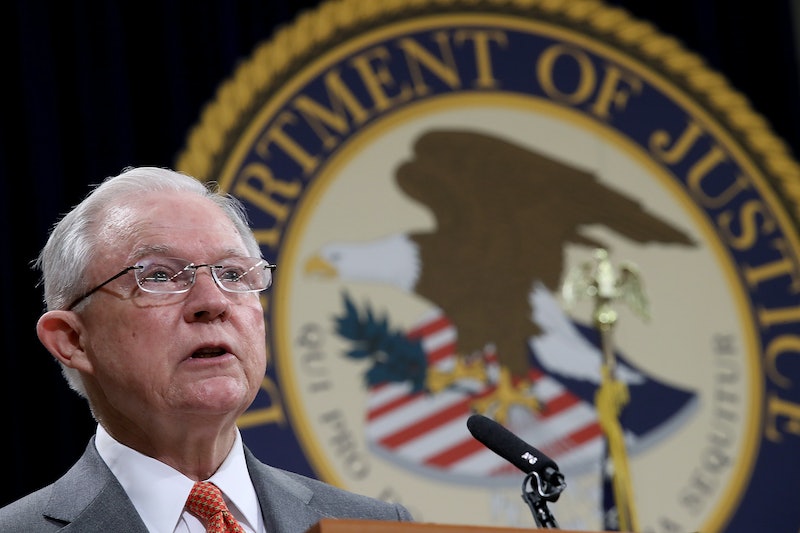 Attorney General Jeff Sessions has the rights of religious Americans at the forefront — and ahead of those of LGBTQ Americans, women, and even some religious minorities, experts tell Bustle. On Monday, July 30, Sessions announced a new religious liberty task force that could impact birth control, as the attorney general hinted in his speech about it.

What exactly the task force will be tasked with or what form it will take was not laid out — except that it will be co-chaired by Associate Attorney General Jesse Panuccio and the Assistant Attorney General for the Justice Department's Office of Legal Policy, Beth Williams.

But Sessions did give a hint as to where he would focus with his statement. "We’ve seen nuns ordered to buy contraceptives. We’ve seen U.S. senators ask judicial and executive branch nominees about dogma — even though the Constitution explicitly forbids a religious test for public office. We’ve all seen the ordeal faced so bravely by Jack Phillips," Sessions said in Monday's announcement.

What steps the Department of Justice could do to further limit reproductive rights remains to be seen, but American Civil Liberties Union Deputy Legal Director Louise Melling tells Bustle that it's "more of the same" of what has been done under this administration so far.

"We should be concerned about how this administration is understanding religious liberty. It gives you a right to your belief and not a right to harm others," Melling says.

The "nuns ordered to buy contraceptives" is a clear reference to Zubik v. Burwell, which looked at whether religiously-affiliated employers needed to provide health insurance that covered contraceptive. The case was remanded to lower courts in 2016, without a final decision by the Supreme Court. Then, in October 2017, Trump issued an executive order that would let almost any employer deny this coverage citing religious beliefs.

Now, Melling says the DOJ and other agencies may be refocused on finding other ways to limit reproductive rights. "We've seen the administration prioritize their conception or vision of religious liberty, giving you a right discriminate," she says. "And they can of course use the resources available to them in the different agencies to be ensuring their visions are carried out, whether that's through ensuring compliance with their regulations, whether that's through how they structure contracts, and in terms of which kinds of complaints that come into them they countenance."

Rachana Desai Martin, senior federal policy counsel at the Center for Reproductive Rights, tells Bustle that the task force looks a bit like the Department of Health & Human Services (HHS) Conscience and Religious Freedom Division, which was created in January to "restore federal enforcement of our nation’s laws that protect the fundamental and unalienable rights of conscience and religious freedom," according to a press release.

Martin says the need for such a division in the HHS — which is found in the department's Office for Civil Rights — and what exactly it would do has never been made clear, and the same thing could be a concern for the DOJ task force.

"It's pretty sketchy as to why they needed such a division and what they would be doing," Martin tells Bustle. "With respect to that HHS division, we requested documents on why is it need and what it would be doing. Ultimately, we've had to take the Trump administration to court to get those documents, because they haven't been forthcoming."

Martin says the Center for Reproductive Rights will keep a close eye on the new DOJ task force, too. They'll want details "about why they need it, what they think it will do, and how it specifically limits access to care, will be really important."

Martin also says an important thing to remember when initiatives like this are announced is that the administration is "still bound by the law." She noted that the Trump administration's rules on contraceptive coverage have been enjoined by courts and currently no women have lost birth control coverage as a result.

The ACLU sees its role in the legal fight as almost ironic. "We stand for the right of religious liberty," Melling tells Bustle, "but we do not stand for this."