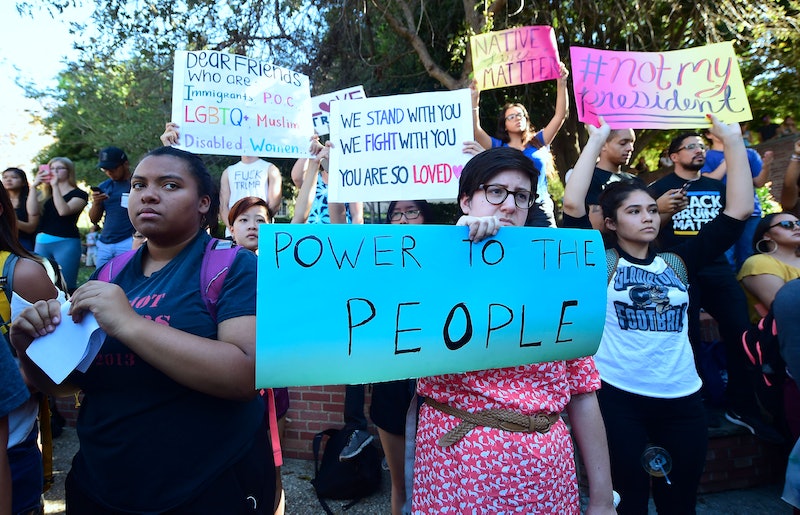 If you're looking for ways to support social justice movements and take political action in light of Donald Trump's inauguration, organizers of Stay Woke and Campaign Zero have created the Resistance Manual, a wiki guide, as a public resource. The manual lays out Trump's and the GOP's policy agenda on more than 10 major political issues, such as immigration, reproductive justice, climate change, and LGBTQ rights. The manual also provides educational tools such as readings on housing and poverty, a guide to state and local politics, and ways to call your representatives. (Bustle has reached out to Campaign Zero for comment.)

The Resistance Manual is formatted exactly like any other wiki page, with a table of contents at the top so you can easily click on whatever topic you're most interested in learning about. The manual isn't just for political activists to use; anybody is welcome to access, edit, and read it.

The mission of the project is outlined on the manual's homepage:

"There are more of us who believe in equity and justice than those who support Donald Trump's ideology of fear and hate. Together, we can harness the collective power of the people to resist the impact of a Trump presidency and to continue to make progress in our communities."

Launched on Jan. 17, the manual has already become a comprehensive guide with endless pages of resources, including crisis hotlines for specific marginalized communities, statistics about police violence, and a list of public figures who have endorsed Trump.

There are still a few intersectional gaps here and there, however. For instance, as the Daily Dot points out, there is no section on disability issues as of this writing; furthermore there are only brief mentions of the rights of people with disabilities on the health care page (which talks about people with preexisting conditions who may lose health coverage under Trump's presidency), the education justice page (which discusses Secretary of Education nominee Betsy DeVos' ignorance about a federal law that protects students with disabilities), and the voting rights page.

Update: Aditi Juneja, volunteer legal advisor for Campaign Zero, tells Bustle via email that more sections of the Resistance Manual do include discussion of disability issues; for example, the education justice page has been updated recently and now includes information about DeVos' views on the Individuals with Disabilities Education Act. Juneja also notes that when beginning work on the wiki, she reached out to many people with expertise in a variety of areas, including advocates for disability rights, "to make sure we were getting a variety of content."

Earlier: Another major issue that's worth including more specific information about is combating sexual violence and discrimination, which is directly related to both women's rights and reproductive rights.

That being said, the Resistance Manual is a work-in-progress (it is a wiki, after all; the whole point is to add to it and let it evolve as needed over time) and a great opportunity to make important issues more visible. What's more, it's an open-source platform, which means any person who believes an issue is missing can contribute their knowledge directly to the guide. To edit any part of an article in the manual, simply click on "Edit" beside any paragraph and you'll get access to that section's HTML.

At the bottom of every "Edit" page, there's a reminder that any content you add to the Resistance Manual "may be edited, altered, or removed by other contributors," so keep that in mind if you do decide to compose any sections for the manual.

Given how precarious the next four years will be, I believe it is absolutely the right time to have something like the Resistance Manual handy. The reality is that we have a new president whose potential policies could negatively affect millions of Americans. Women's bodies are at stake. Immigrants face deportation. This isn't about being politically correct. This is about supporting intersectional feminism, standing in solidarity with people of all identities, protecting the individual lives of Americans who are at risk of getting their human rights taken away by Trump's policies, and ultimately taking action against whatever the next four years may hold for us. As the famous rally chant goes, it's time for us to "stand up, fight back."