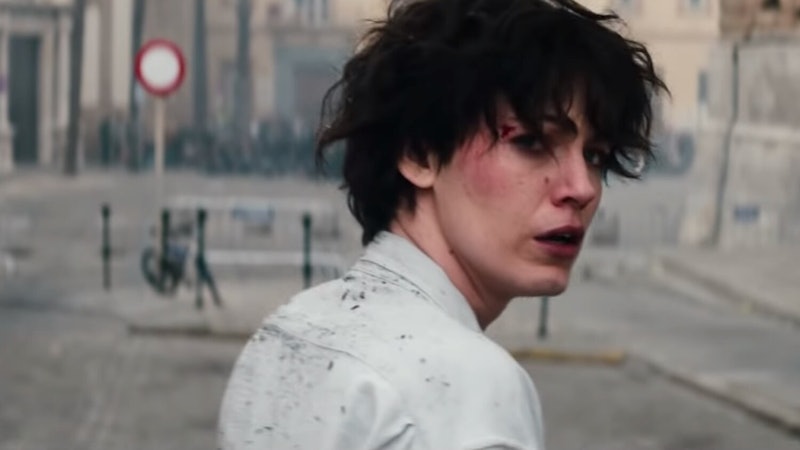 The Rhythm Section may sound more like a music biopic than a psychological spy thriller, but trust us, the novel-turned-film is an edge-of-your-seat story of suspense. Blake Lively stars as Stephanie Patrick, a woman whose world was shattered by a catastrophic plane crash that killed her entire family. After Stephanie finds out the crash was no accident, she launches on a mission of revenge, becoming an assassin for an intelligence service to get closer to the truth. And while the novel was a fan favorite, The Rhythm Section's book ending highlights why this is the kind of story that will really sing on the big screen. (Spoilers ahead.)

Though both the book and movie follow Stephanie's journey to becoming an assassin, at its core it's a look at a woman who never really had an identity of her own, finding one. The book spends a long time with Stephanie working and living on the streets, broken following her family's death. But when a visiting reporter tips Stephanie off to the fact it was a terrorist bomb, not an accident, that crashed the plane, she finds a new sense of purpose. One that leads her all the way to learning the identity of the bomber — Reza — only for underground antiterrorist organization Magenta House to kidnap her before she can kill him.

Magenta House has their sights set on the mastermind behind the bombing, and either Stephanie walks away and forgets about killing Reza, or gets trained and assigned missions by Magenta House that will allow her to pursue him. She agrees to the latter, faking her death and taking on numerous other identities.

Despite her training, she retains some trace of her original humanity, even slowly falling for her neighbor Frank. Attempting to quit in the face of the monster she feels she's becoming, Magenta House threatens her brother's family, the only family she has left. Reluctantly, she continues her work.

When she finally confronts Reza — ostensibly to stop his team from hijacking a plane on behalf of Magenta House — Stephanie learns his motives for blowing up the plane were identical to her own, pursuing revenge for murdered family members. But before she can react, a hit squad sent by Magenta House comes in and stops the would-be hijacker.

The book's final chapter jumps ahead, with Magenta House leader Alexander reflecting on the mission. While a success, his irritation at Stephanie for going rogue lingers, and he tries to track her down. Later, Stephanie —who's living under a false identity, but has found love with Frank — puts a stop to Alexander's meddling, threatening to kill him if he continues. And while Stephanie seems to have settled things once and for all, it's a wild ride right up until the very end.

More like this
Your Guide To Watching 'Everything Everywhere All At Once' In The UK
By El Hunt and Sophie McEvoy
Here's How Netflix Should Adapt Prince Harry's Memoir Into A Movie
By Ginny Hogan
Jessica Simpson On The Time She Was Pursued By A Backstreet Boy & An *NSYNC Member
By The Editors
Netflix Shut Down 'Bridgerton' S3 Rumours About A “Very Dark” Storyline
By Bustle
Get Even More From Bustle — Sign Up For The Newsletter
From hair trends to relationship advice, our daily newsletter has everything you need to sound like a person who’s on TikTok, even if you aren’t.