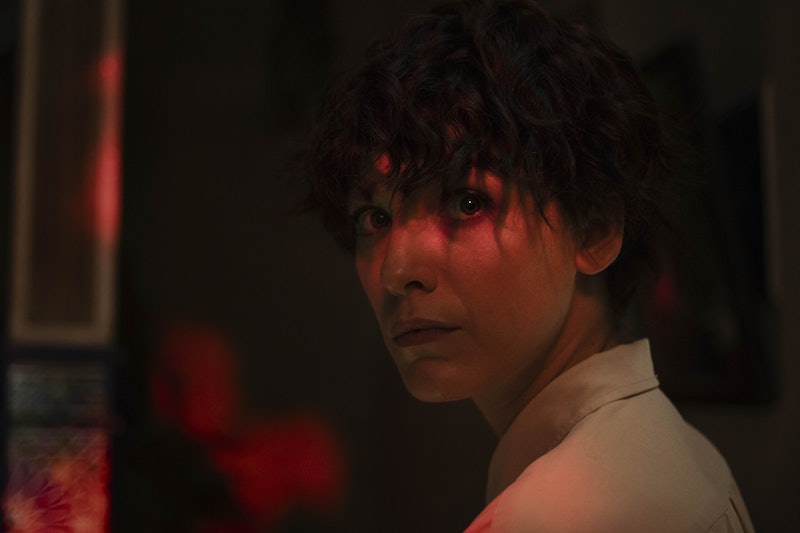 With last year's A Simple Favor, Blake Lively proved herself to be adept at a certain type of thriller. But The Rhythm Section is not another stylish, suburban mystery. In her new film, Lively plays Stephanie Patrick, a woman who takes drastic action after losing everything she has. While many blockbuster movie characters enact violence with no consequences, Stephanie may give you a better idea of how you'd fare in her situation. For Lively and the filmmakers, making her a believably fallible action hero was key to the story, as you can see in the gritty first trailer for The Rhythm Section, debuting exclusively on Bustle along with the film's poster.

The audience meets Stephanie three years after her family tragically died in a plane crash. Blaming herself, the lonely woman has spiraled down to a dark place, developing an opioid and alcohol addiction. "Her family was everything that mattered to her, even though she didn’t fully appreciate that while they were alive, so she’s riddled with even deeper guilt," Lively tells Bustle in an email.

But her life turns around when Stephanie meets an investigative journalist (Raza Jaffrey) who reveals to her that he's been tipped off by a Secret Service agent (Jude Law) that the tragedy wasn't an accident, but a terrorist attack that the government has covered up. (Sterling K. Brown also stars.) She then makes it her mission to seek justice and get her revenge on those responsible, traveling all over Europe in the process.

"When she goes for something, she goes big, whether that’s her rise or her fall," Lively says of her character. "When a person like that has nothing to lose, she is capable of anything. That is her superpower."

The psychological thriller is based on the book by Mark Burnell, who also wrote the script, and helmed by Reed Morano, who won a directing Emmy for The Handmaid's Tale. Producer Barbara Broccoli, who's also worked on several Bond films, tells Bustle over the phone that Lively was "very, very much involved in the whole storytelling of [the movie]," through disappearing into the role of Stephanie.

"A lot of these movies that have had female action heroes make you feel like they're male fantasies of what a woman would be like in this situation. This is much more gritty and realistic, and intentionally so," Broccoli continues. "We wanted to show [Stephanie's story] from a female point of view, and from a point of view of an average person." The Rhythm Section isn't about nonstop, explosive action. Instead, the producer explains, it explores "the toll [Stephanie's mission] takes on her emotionally throughout the story."

Pushing against the stereotype of the hyper-sexualized female action babe, Stephanie is a raw character whose vulnerabilities are shown. "She responds like any person would," Lively says. "She’s scared shitless but fights for her life. She doesn’t have real training or expertise but she has the primal power of the human will."

In separate phone interviews, Broccoli and Morano both emphasize that Stephanie also has agency throughout her journey. She hits rock bottom and then makes the conscious decision to change her circumstances. In The Rhythm Section, Stephanie is granted "the right to decide she's going to go on this mission and [to] use whatever tactics she wants in order to fulfill her mission," Morano says. "It's definitely a wild ride, but it's a big journey and a character study."

"Stephanie is a survivor. She continues to test this in herself. Everything she puts herself through proves that," Lively explains. "She puts herself in extreme circumstances, thinking she’s trying to die, but she’s really trying to survive. She is constantly testing her inner strength as her self-worth is regularly undervalued, by her, first and foremost. But she knows, at her core, she’s worth more."