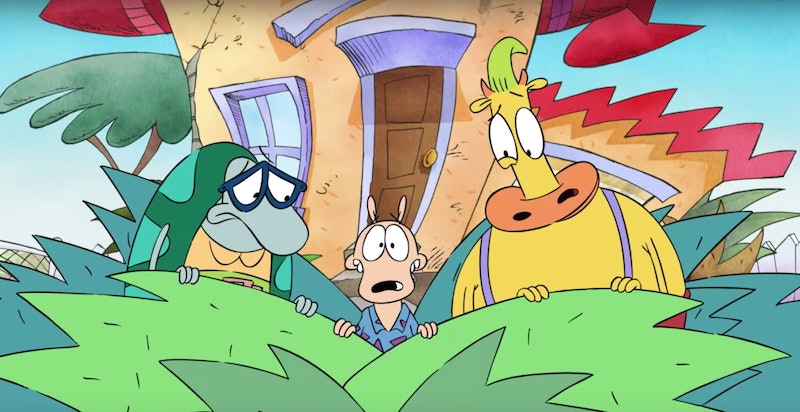 Nickelodeon/YouTube
By Meghan DeMaria
May 13, 2019

Millennials who grew up watching Nickelodeon will be very excited by this news. The Rocko's Modern Life movie is coming to Netflix, and fans won't have to wait long for the new film to hit the streaming service.

Netflix confirmed the news with a fitting GIF on Monday afternoon. The Netflix Family account tweeted,

"'90s kids, dreams do come true! The Rocko's Modern Life movie is coming to Netflix this summer, for you to share with your own kids (yes, it's been that long) #RockosModernLife"

That's right: The new movie will hit Netflix this summer, as will an Invader Zim movie. And the two films should satisfy fans of the original series, too: They were each written and directed by the shows' creators, Joe Murray and Jhonen Vasquez, The AV Club reported. Plus, the outlet noted, most of the shows' original voice actors will be participating in the new projects, too.

As The AV Club pointed out, the news has been a long time coming. The Rocko's Modern Life: Static Cling trailer first premiered at San Diego Comic Con in 2017. But this news is the first time the two new movies have actually had a confirmed distributor in Netflix.

Fans were quick to respond to Netflix's tweet with GIFs from the original show. If a picture's worth a thousand words, the images show just how happy fans are about the new Rocko's Modern Life movie.

Still, other fans used GIFs to point out how long they've been waiting since the trailer premiered.

Vice might have had the best response to the news, though. If classic '90s cartoons are getting new movies, why not bring back nostalgic snacks like Dunkaroos to eat while watching them?

And while the movies promise to bring back fans' favorite beloved characters, the new storylines will be updated for the times. The AV Club reported that the Rocko's Modern Life movie will be a satire featuring smartphones, even if the devices didn't exist during the show's original run.

In the Rocko's Modern Life: Static Cling trailer, Rocko issues the on-the-nose declaration, "I don't think we're in the '90s anymore." Their once quiet neighborhood is filled with signs reading things like "Student Loans" and "BuzzBucks." It's a sensory overload, and the group can't stop drinking the coffee and chasing after the latest "oPhone" models.

There's also the "Schlam-o" power drink, which seems to be messing with consumers' bodies. At first, the green hue looks like Nickelodeon's famous slime — but the liquid causes Filburt and Heffer to develop muscles that seemingly come out of nowhere.

While Rocko's companions seem totally on board with all of the 21st century advancements, the titular wallaby doesn't seem so sure. The trailer ends with him declaring that it's a "very dangerous century." The movie definitely isn't taking the whole satire aspect lightly, and it might make viewers reconsider their devotions to their smartphones.

For fans missing the animation style that dominated Nickelodeon in the '90s, the new movie will be a welcome addition to Netflix's lineup. The trailer looks just like the show did, which should be a comfort to '90s kids looking to relive some of those childhood memories.