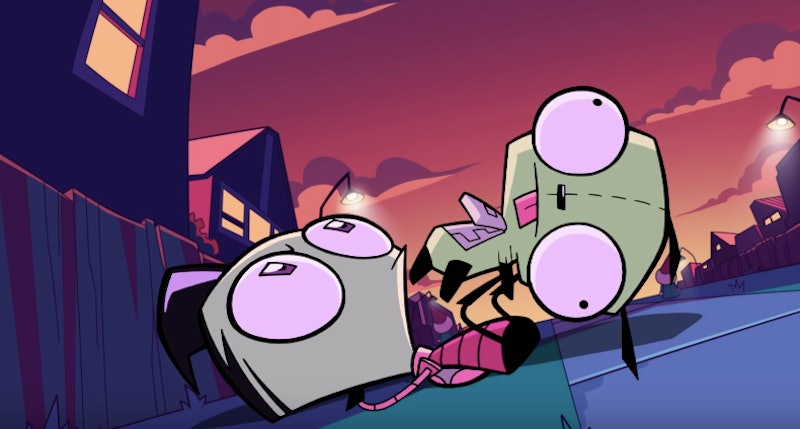 Few words can accurately capture Invader Zim, an early '00s television series that aired on Nickelodeon. Much like the Terminator, though, it is back. The Invader Zim TV movie teaser premiered at Comic-Con on July 21, and honestly, you won't believe Nickelodeon went for it. Much like the series itself, the Invader Zim trailer is dark, surreal, bizarre, and charming, all in a way that shows designed for children rarely are. (See also: Cartoon Network's Adventure Time.) There's just some ineffable draw to it. It has a specific color palette — lots of fuchsias and turquoises and grays — and an almost garish design style, but it's captivating all the same.

The official title for the Invader Zim TV movie is Invader Zim: Enter The Florpus, which sounds appropriately strange.

ZIM discovers his almighty leaders have no intention of coming to Earth and he loses confidence in his own amazingness for the first time in his amazing life, which is the big break his human nemesis Dib has been waiting for.

If you've spent any time with young children watching television in the last few years, you'll know that Invader Zim is decidedly not what kid's shows look like anymore. In fact, Invader Zim is more like what would happen if former Nick series Danny Phantom was created and drawn by his goth friend Sam. So it's delightful. Weird and one-of-a-kind and delightful.

Watch the teaser trailer for Invader Zim: Enter The Florpus below:

Its distinct style is largely owed to creator Jhonen Vasquez, whom Nickelodeon hired specifically thanks to his comic book background. Vasquez initially conceived the show to appeal to the older end of Nickelodeon's demographic; how successful he was is up for debate. On the one hand, the show was canceled before it had aired two full seasons. On the other, it was literally award-winning and is returning to television in 2018.

Are details of the show starting to come back to you? If not, that's okay; it's been a while. Basically, Invader Zim was about an overconfident extraterrestrial being named Zim trying to take over planet Earth to enslave the human race. His overlords sent him here from their home planet, "Irk", with only the help of an ineffective pint-sized robot. You know, GIR. The adorable, malfunctioning little dude that Zim disguised as a puppy with its tongue hanging out of his mouth? That guy! Zim and Gir were often hunted — even occasionally foiled — by a human classmate and paranormal investigator named Dib. Sometimes, Gir sang "The Doom Song" to himself.

This was a real show. On Nickelodeon. And while the network eventually bailed on it, the critical industry (and passionate fan network) have not. Did you know that Invader Zim won an actual Emmy? Because it did: Outstanding Individual Achievement in Animation, way back in 2001.

Invader Zim: Enter The Florpus will premiere later in 2018. As of now, there are no plans to produce a series of television movies, nor reboot the show for a new audience. It also does not appear that Nickelodeon will be bringing the show back to syndication anytime soon — they tried it with the Nicktoons channel in 2011, but quickly gave up. If the initial audience is well into their 20s and early 30s by now, will the television movie adaptation pique their interest, let alone hold it? Will today's average Nick viewer be into it, a TV movie adapted from a show that was likely canceled years before they were born? Who knows, but it's happening all the same, and it's exciting to watch it happen. And now, it's time to sing "The Doom Song".

More like this
Courteney Cox Recreated An Iconic 'Friends' Scene To Surprise Fans
By El Hunt
These 'Law & Order: SVU' Throwback Pics Show 23 Years Of Shipping History
By Grace Wehniainen
Kim Cattrall Had A 'Sex And The City' Reunion With Creator Darren Star
By Grace Wehniainen
17 Photos Of The 'Wednesday' Cast Vs. The 1991 'Addams Family' Cast
By Grace Wehniainen
Get Even More From Bustle — Sign Up For The Newsletter