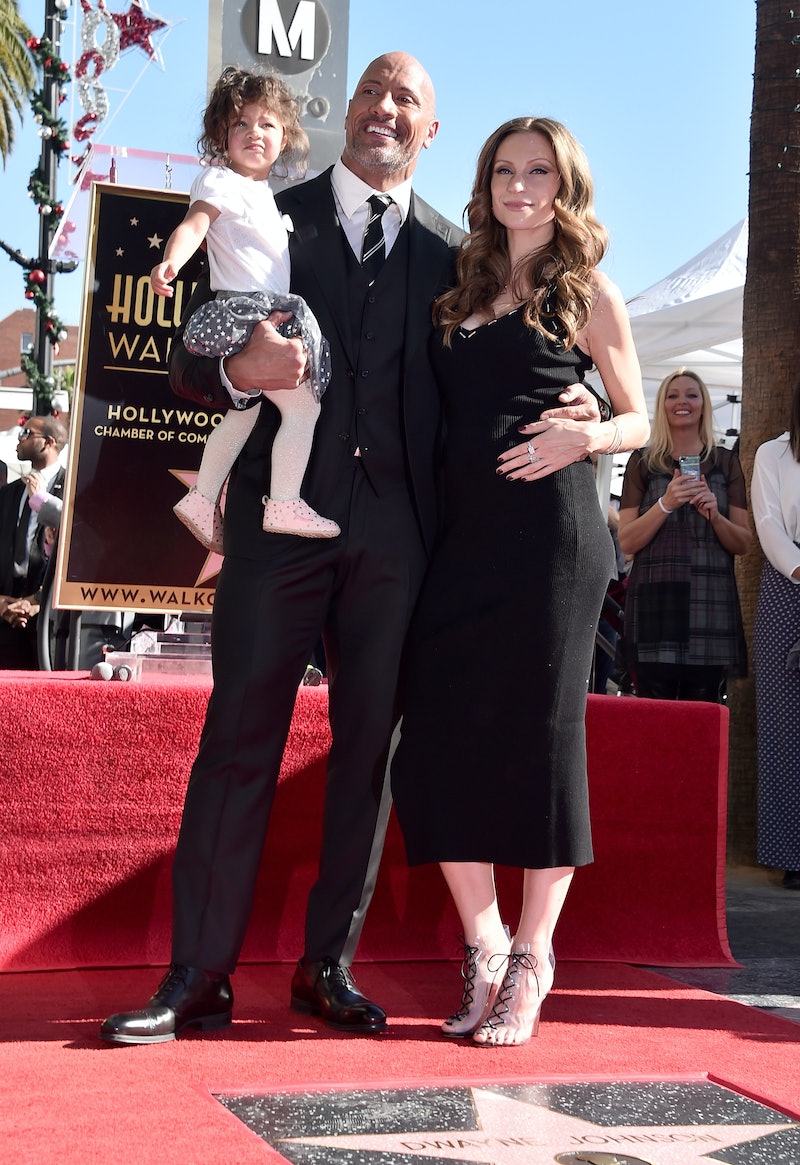 Despite his solid exterior, Dwayne "The Rock" Johnson often displays his softer side. The Rock's Instagram photo with his daughters that he posted just a few days after Christmas is a perfect example of that. In the photo, Johnson poses with two of his three daughters — 8-month-old Tiana Gia and 3-year-old Jasmine "Jazzy" Lia — in front of the family's Christmas tree. But it's Johnson's accompanying words about the importance of being a devoted and caring father that makes this holiday post all the more special.

As Johnson noted in his caption, he's currently able to hold both of his youngest daughters in "daddy's arms." But even someone with superior muscle strength like the Rock knows that he won't be able to do that forever. He already has experienced his children getting older firsthand since his daughter Simone with his ex-wife Dany Garcia is 17 years old and was last year's Golden Globes Ambassador. So the Rock isn't taking any moments of Tiana and Jazzy's childhood for granted. The Rampage actor wrote:

"Daddy's arms. I ain't gonna be able to hold 'em like this forever, so you better believe I snatch these cookies and love 'em up every moment I can. Plus, I know there's gonna come a day where in daddy's arms is the last place they want to be. Baby Tiana Gia is already there with the 'help me' look on her face 😂🤦🏽‍♂️ Can't guarantee I'll love and protect all my daughters for the rest of their lives, but I can guarantee I will for the rest of mine."

Along with photos from the sets of his upcoming movies (like the Fast & Furious spinoff Hobbs & Shaw and Disney's Jungle Cruise), videos of his gym workouts, and snaps of his "cheat meals," Johnson often gives parenting updates on his Instagram. Even with the astounding number of movies he makes, the Rock's Instagram makes it clear that he still makes time with his young daughters a priority.

Before his "daddy's arms" post, the Rock had shared Jazzy's adorable reaction to seeing her gifts on Christmas morning. He wrote that it was "kinda like heaven I guess" and that, "Simply put, I live for movements like this and I'm one lucky SOB to make them happen."

Other father-daughter bonding moments with Jazzy that the Rock has shared on social media include when she painted his nails and even his face. Jasmine has also been known to watch her dad's workouts. And while Tiana is less than a year old, she also has a presence on the Rock's page — although she understandably has appeared slightly less interested in being featured than her big sis.

Johnson's longtime girlfriend and mother to his two youngest daughters, Lauren Hashian, praised her boyfriend's parenting skills on Instagram. "I already love you but to see you as a father made me fall in love you even more," she wrote on Father's Day — just two months after Tiana was born. "Playing and laughing constantly every time you're together. Leading with your wisdom, guidance, patience, and compassion as they grow up. Always asking yourself how can I be the best father to each of my girls. ... There is really no other like you." Even his older daughter Simone is grateful that the Rock is her dad. "Happy birthday to a man who's called so many things, but who i'm lucky enough to call dad," she wrote in an Instagram post for his birthday.

It seems that being a good father to his daughters is one of the most important things to the Rock. Like he wrote in his most recent holiday post, "Can't guarantee I'll love and protect all my daughters for the rest of their lives, but I can guarantee I will for the rest of mine." And that's the kind of love that every child should experience.