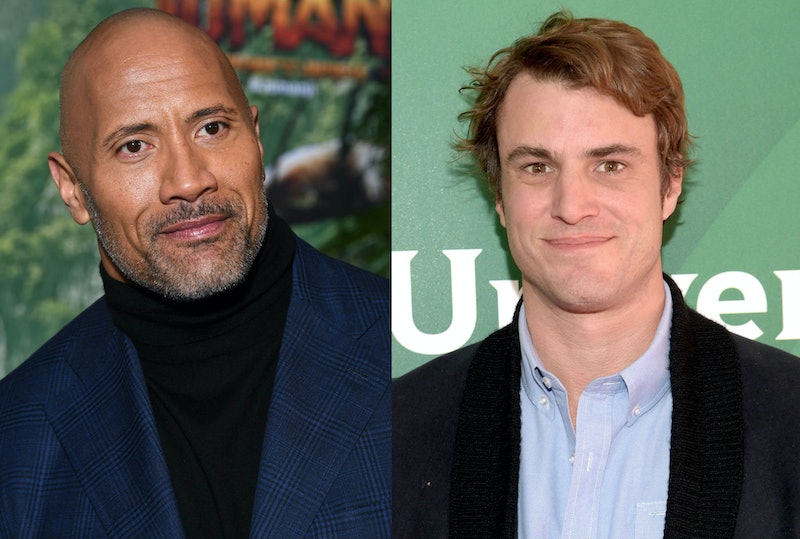 Dwayne "The Rock" Johnson is not smelling what this Southern Charm star is cooking. If you haven't heard, The Rock responded to Shep Rose's criticism of Fast & Furious in a way that had the Bravolebrity instantly apologizing. Their exchange originated on Sunday, Feb. 3 during the Super Bowl when Rose negatively tweeted in reference to a new spot for The Rock's movie, Fast & Furious Presents: Hobbs & Shaw, which also stars Jason Statham, Vanessa Kirby, Idris Elba, and Eiza González.

Rose's tweet began, "They are never going to stop making fast and furious movies." He continued,

"My question is..who keeps paying to see them? I don’t know one person that does. Guy Fieri?"

At this time, it doesn't appear that Guy Fieri has responded to the reality star's tweet, but The Rock definitely did. The former professional wrestler turned mega movie star replied to Rose on Feb. 4,

"Hahah crazy right when you think the franchise over the years has made over $5billion globally. Oh and I know one guy who watches.. my buddy Mark Zuckerberg. Crazy right!?"

Oh, snap. This is proof right here you don't mess with The Rock and one of his films that he's beyond proud of, not to mention a franchise that is beloved by many — and continues producing new material.

You bet The Rock's response got the attention of Rose, who answered the Jungle Cruise actor that very same day. The Southern Charm replied,

"Whoa! The @TheRock answered my somewhat snarky tweet about the fast and furious franchise. I now officially retract my statement and will immediately binge every movie consecutively. Anything to keep The Rock on my good side. . All the best to you sir!"

If you think Rose stopped there, he didn't. On Feb. 5, he apologized — again. In response to a tweet from Charleston's ABC News affiliate reporting on his situation with The Rock, Rose tweeted, "Forgive me Mr. Johnson. I know not what i do !"

A Twitter user replied calling The Rock "sensitive" and "snowflakeish," but Rose quickly came to his defense by writing, "Not true. He was pretty nice about it."

As for Rose's comment about Fieri, he tweeted on Feb. 5,

"The Guy Fieri dig was less about his show, which isn’t bad and shines a light on dive restaurants . But More about the flame across the shirt, wrap around shades, and frosted tips."

Yeah, the Charleston, South Carolina native who became famous for the Bravo reality series surely ate his words. At least Rose apologized to The Rock directly — and on Twitter for the world to see, right? He could've shied away or just ignored the situation altogether. The Rock has yet to respond to Rose's apology.

As Southern Charm fans know, Rose is known for his criticisms, especially when it comes to his friends. This time, it's probably safe to say that Rose quickly learned it's best to stay in his lane whenever criticizing one of The Rock's movies.