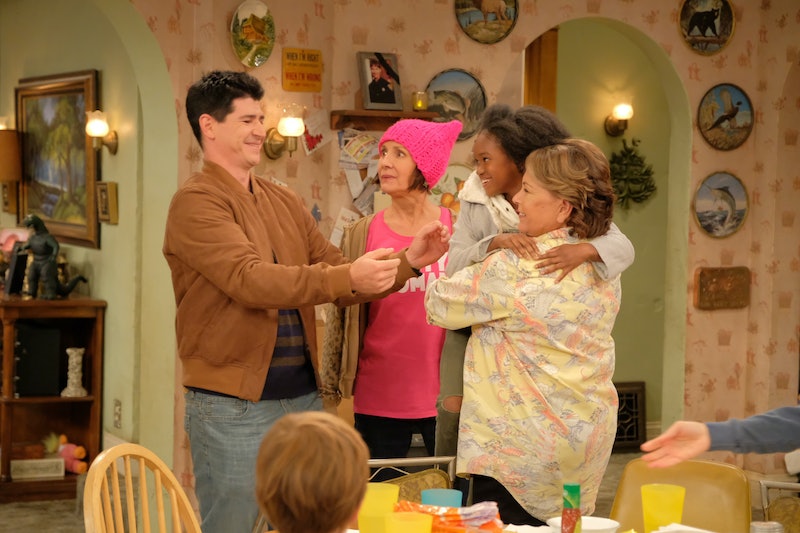 Roseanne Conner, and the woman who plays her, Roseanne Barr, returned to television last night after 21 years. And much like many of the other '90s reboots that have been hitting the small screen lately, Roseanne will have to come to terms with the fact that it will have to adapt to the sensibility of a new millennium. And one thing that's been hovering over the reboot is the previously announced plot point that Roseanne is a Trump supporter.

Modeled after Barr's own support of the commander in chief, Roseanne the character's sudden conservative vote after years of progressive views on everything from labor union support to her own experience with abortion was shocking to many fans of the show. But while the hour-long premiere did dip its toes into political territory, it didn't spend its entire runtime spouting Trump talking points, and hopefully neither will the rest of the season. But it will be up to the individual viewer's tolerance for Barr's history to decide whether or not this reboot is watchable.

As a working class white family from suburban Illinois, it's not terribly surprising that the Conners would be Trump supporters. Though the '90s iteration of the show espoused plenty of Barr's own progressive views on gay rights and women's issues, the Conners are exactly the kind of family whose decades of financial strain would contribute to feelings of abandonment that many white, working class families in middle America felt before the 2016 election. And for many, those feelings resulted in a vote for Trump.

Though the new Roseanne never says the names Trump or Clinton outright, it's evident from the moment Aunt Jackie (Laurie Metcalf) walks through the door in a pink pussy hat and a "Nasty Woman" T-shirt that the 2016 election is still a contentious matter for the Conner family. In fact, Jackie and Roseanne haven't spoken in over a year because of the results.

The Conner family may be ruled by a matriarch who voted red, but it seems like the reboot is at least trying to represent the predicaments of a modern 21st century family. Retired from the U.S. Army, DJ (Michael Fishman) is married to a black woman who is still fighting overseas, and they have a biracial daughter. Darlene (Sara Gilbert) is a single mom of two, one an independent teenage girl, the other, Mark, a nine-year-old boy who likes to wear girls' clothing. Mark isn't transgender, but his nonconformity definitely gets some side eye from the older Conners. And in a fun casting twist, Becky, as played by original Becky actor Lecy Gorenson, has chosen to be a surrogate mom for a wealthy, crunchy woman played by Becky No. 2, Sarah Chalke.

How to get along with one another despite vast differences isn't something the new Roseanne is trying to teach — it just shows it, and there's certainly value in that.

While these more "woke" storylines are deliberate nods to the political climate of 2018 on the more liberal side of the aisle, some might view the addition of a biracial granddaughter and a gender nonconforming grandson as the Roseanne reboot trying to have its cake and eat it too. With Jackie and Roseanne calling each other "snowflake" and "deplorable," it's easy to see that the series is trying to play to both sides of the political spectrum, and for some, it can be a bit whiplash-inducing.

There's no denying that the Conner family is real; there are families just like them all across the nation who are struggling with jobs, money, and security. Roseanne's reflection of the working class is what made the original series such an important one to begin with. But the new Roseanne's digs at progressivism, be they in the form of Jackie's feminist rants that are played for laughs, or the joking manner in which it handles issues that many regard with fear (at one point, Dan clumsily pulls a gun out of a freezer) show that the series is willing to make fun of some things folks take very, very seriously. Whether that's something you're willing to embrace is going to be an individual preference.

The most frustrating aspect of the Roseanne reboot is the character for whom everything has changed in the last 20 years: husband Dan (John Goodman, who's not actually dead). As a straight, white man, Dan Conner epitomizes what every social, political, and feminist revolution has been fighting to bring down a peg or two in the previous two decades. And the problem is, Dan shows it. He spends the first two episodes as a walking cartoon of a caveman, throwing a fit over the fact that he can't control his daughter's reproductive system and trying to get his grandson out of a skirt and into some manly pants. Dan has an incredibly hard time with Mark's gender nonconformity, but any future challenges in Mark's life that Dan's discomfort is supposed to represent comes off more as bigotry than a metaphor. "When did 'masculine' become a dirty word?" Dan asks, as if he's in mourning for the loss of the man's man, not understanding that men don't come in a single type.

At least there's Sara Gilbert, whose grown up Darlene is a touching representation of a modern mom. Her way of handling Mark's differences is emotionally raw, especially when she tells him to "Hang in there until everyone figures out that weird is cool." It's the Roseanne version of "It gets better."

But if there's one thing that the new Roseanne does well, it's remind us that families across the country were truly split back in November 2016, and that many remain divided over the political landscape to this day. That parents and children and grandchildren have to live together and still love each other despite fundamental differences on issues like LGBT rights, women's reproductive rights, and foreign policy is the central premise of this reboot. How to get along with one another despite vast differences isn't something the new show is trying to teach — it just shows it, and there's certainly value in that. It might not all be pretty, nor will it always come with a distinct message.

But whether or not someone tunes in for the rest of this reboot may have more to do with Barr herself than with the version of herself on the show. Barr has talked herself up as someone who is interested in diversity, the legalization of marijuana, and women's reproductive rights. (Why then, she supports Trump is a question she seems to frequently avoid.) But some of her more problematic comments on the transgender community have come to light again, and she has dipped into some right-wing conspiracy theories. So it seems like Barr is as divided herself as the Conner family is on the show. It will be interesting to see how the rest of the season handles this divide, but whether you can tolerate Barr's personal imperfections — and her character's MAGA jabs — depends on your willingness to wade a bit into the swamp.

More like this
Ozzie’s Coming Out Scene With Kitty On 'That ’90s Show' Has Twitter Sobbing
By Brad Witter
'The Last Of Us' Episode Schedule Competes With The Super Bowl & Oscars
By Brad Witter
Grammys Host Trevor Noah Made Adele's Dream Of Meeting The Rock Come True
By Brad Witter
Pedro Pascal Barely Got Through The "Lisa From Temecula" 'SNL' Sketch
By Stephanie Topacio Long
Get Even More From Bustle — Sign Up For The Newsletter
From hair trends to relationship advice, our daily newsletter has everything you need to sound like a person who’s on TikTok, even if you aren’t.