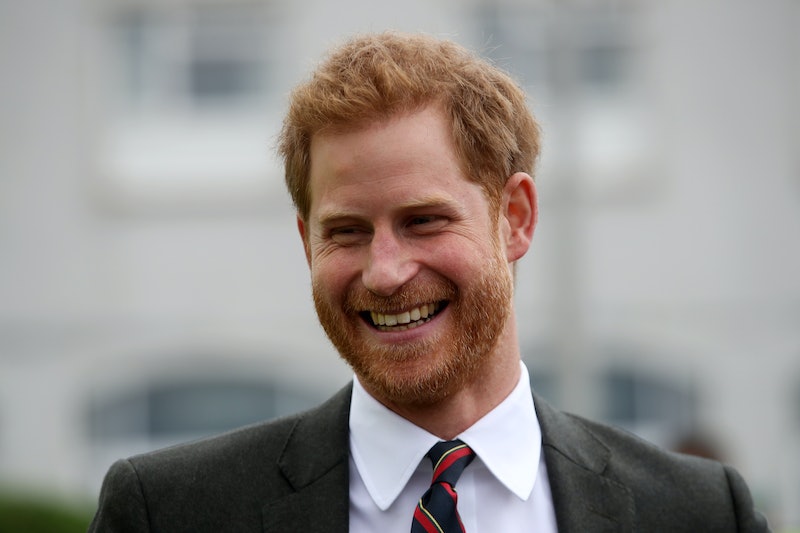 The Duke of Sussex is officially 34, and he has plenty of reasons to celebrate his big day this year. Birthday wishes for Prince Harry have been pouring in from the official royal accounts on social media (not to mention from his many fans) all day on Saturday, Sept. 15, but there's no word on how he'll be celebrating. That's OK though, it's enough knowing that this marks his first birthday as Meghan Markle's husband. No matter what those two get up to, it's sure to be fun. In the meantime, Prince Harry isn't lacking in the well wishes department.

In addition to the more stately birthday wishes from the Kensington Palace and The Royal Family accounts, royal commentator Omid Scobie shared a flawless throwback video of Prince Harry dancing to Katy Perry's "Firework." The video is a perfect reminder of just how adorable the prince can be. Scobie captioned his tweet,

"Happy birthday to the king of getting stuck in and being a good sport! A throwback video I took of Prince Harry during his 2014 Chile visit, dancing to @katyperry at the @FundAmigosJesus daycare centre"

This has been a big year for Prince Harry. Not only is he turning 34, he also married Markle on May 19. Both he and Markle also received their royal titles as the Duke and Dutchess of Sussex this year as well. Add in all of the charity work, trips, and Queen Elizabeth's 92nd birthday bash, and 2018 is clearly one for the history books for Prince Harry.

Fans of the royal family have been sharing their best wishes for Prince Harry via Instagram and Twitter, and the official royal accounts shared their appreciation with a short, but sweet post. The official Kensington Palace account shared a photo of the prince alongside a caption that reads,

"Thank you everyone for your lovely messages on The Duke of Sussex’s birthday! #HappyBirthdayHRH"

Some of the birthday messages have been quite moving. One Instagram user left a comment on the post that read, "Happy birthday! I wish you much love and joy this first birthday year of being married!" Another user wrote, "Happy Birthday HRH prince Harry, we are so proud of you and all that you have accomplished. Thank you for giving your service to the military, and thank you, sir, for all your kindness and generosity to humanity. Thank you, sir, for reminding us to never take each other for granted, and just simply reminding us how easy and beautiful it is to love and be loved, and that it's OK to show affection to those we love. Thank you. You make us so happy."

The Royal Family Instagram also got in on the action with their own photo of Prince Harry, and a birthday message. Seriously, if anyone should be feeling the love today it's the prince. He's getting messages from people all over the world, and even though they don't tend to share much public affection with the public, he's surely getting plenty of well wishes from his family too.

Most important of all, Prince Harry is surely spending his birthday with Markle this year, which no doubt makes all the best wishes that much sweeter.