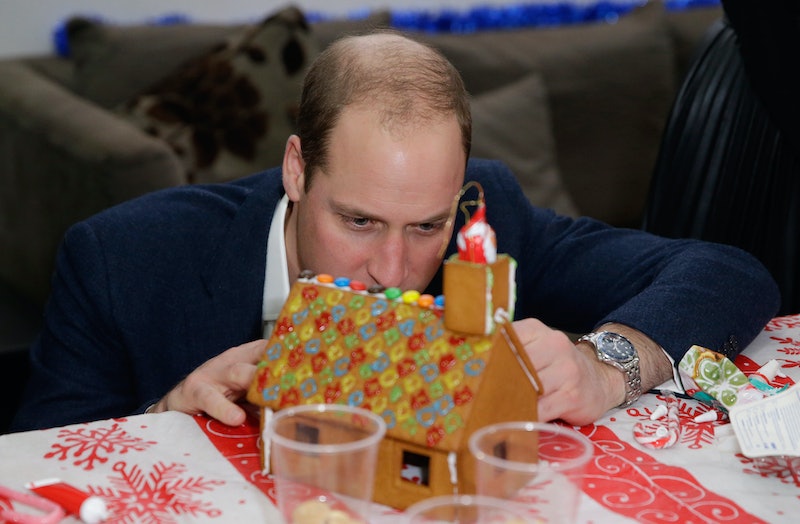 If you, like myself, are endlessly fascinated by the British Royal Family’s holiday traditions, good news: You can recreate one of them yourself right at home — no palaces required. The Royal Family’s gingerbread cookie recipe has been published online, and, uh, folks? It’s actually not that complicated. As far as baking endeavors go, I have no doubt that anyone who has even the slightest amount of experience in the kitchen will be able to handle it. At least it’s unlikely that most of us would have to supply holiday cookies in the numbers the royal pastry chefs do each year, right?

Gingerbread has a long and storied history. It’s not totally clear when or where it originated, but by the medieval era, it had become a fixture in Europe, particularly at fairs and festivals, according to Smithsonian.com. Gingerbread cookies shaped like people, meanwhile, do have a direct connection to the British Royal Family — or at least, they do according to legend: Rumor has it that Queen Elizabeth I (Shakespeare's Queen Elizabeth, not the current one) used to have the royal chefs make gingerbread biscuits in the shape of her most beloved courtiers, which she would then gift to said courtiers, a history of the pastry at Martha Stewart’s website reports. It’s possible this story is apocryphal, but it’s kind of cute all the same.

In any event, the current cookie recipe, which refers to its output as “ginger bread biscuits” (I get the “biscuits” part — that’s what cookies are in the UK — but I remain baffled by the division of “gingerbread” into two separate words), appeared over at the Royal Family’s official website just a few days ago. Technically I suppose it’s just the royal recipe, not the Royal Family’s recipe; the family themselves aren’t the ones who supply the cookies for the various holiday events and receptions held at the royal residence throughout the winter season, after all. It’s up to the royal kitchen team, who, the blog post about the recipe notes, really pull out all the stops around Christmas time. And so, it seems, can you, if the idea of having a holiday baking bonanza fills you with joy and delight.

As The Daily Meal points out, the cookie recipe is written with most of the ingredients listed by weight. This is typical for British recipes; American ones, meanwhile, tend to operate by volume. As such, if you’re an American baker, you might need to do some measurement conversions, based on what you’re used to and on what equipment you have. If you have a kitchen scale, awesome — you can bake the recipe as is. If you don’t, this cooking conversion calculator should help.

For what it’s worth, there’s quite a strong argument to be made for measuring ingredients for baking in particular by weight, rather than volume; it’s much more precise and will typically yield more consistent results. As Sue Quinn noted in her hilariously-titled piece for the Guardian, “Dear Americans, I’m Fed Up With Your Stupid Cup Measurements,” in 2017, one casual experiment carried out by the food website Serious Eats (which, notably, includes both volume and weight measures in their recipes) found that 10 people each asked to measure one cup of flour actually measured out anywhere between 113 grams and 170 grams of the stuff — which, wrote Quinn, “is a huge disparity." As she put it, “Someone might make a cake with 40 percent too much flour in it. I’m thinking that’d be a pretty dry cake.”

Beyond the measurement issue, though, the Royal Gingerbread Recipe is fairly straightforward. None of the ingredients should be hard to come by; all you need are things you might already have in your pantry: Flour, various spices, unsalted butter, brown sugar, granulated sugar, and milk. First, combine the dry ingredient together in a bowl (ideally by sifting them together, although you could also just use a whisk); then cut in the butter; add the milk; and refrigerate the resulting dough for at least two hours. After the dough has chilled, roll it out, cut out the shapes with cookie cutters, sprinkle them with a little granulated sugar, and then bake ‘em until they look done (in the UK, your baking temperature should be 180 degrees; in the United States, it’s 350 degrees). Once the cookies are cool, you can ice them if you like.