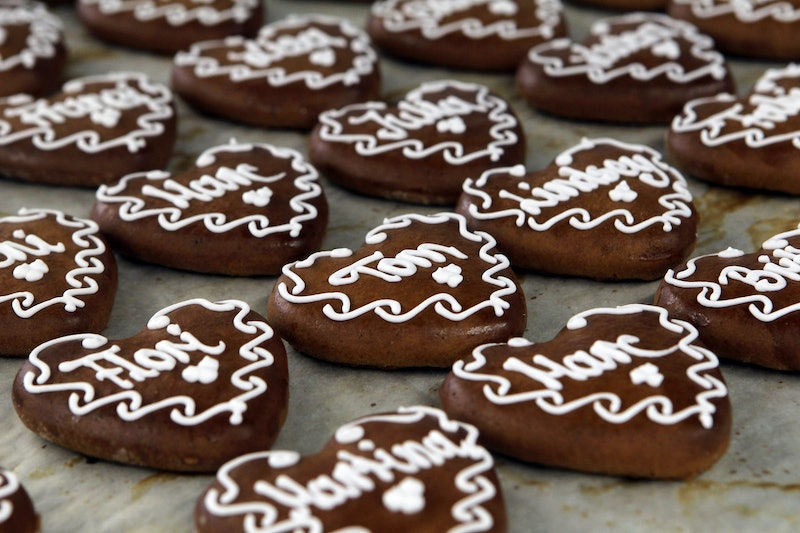 Aside from candy canes and hot chocolate, there's one food that's a bit of a question mark during the holiday season — why do we eat gingerbread on Christmas, and why don't we associate it with other holidays? Just think: we don't make gingerbread houses in March. (Although, come to think of it, maybe we should...)

Gingerbread can take on many forms. Around Christmas, if you're not building with it, you might be making gingerbread men or gingersnaps. It definitely tastes like nothing you've ever had before, which is why it's so special.

Gingerbread is said to have originated from Medieval England, according to Smithsonian Mag, and its name pretty much means "preserved ginger" — which is intriguing, as by now we've all figured that it's not necessarily something we think of when we're pondering bread choices.

People used ginger then like the do now — medicinally. Ever wonder why you were told to drink ginger ale when you were nauseous? It's because the ginger has calming qualities. Maybe the fact that it calms the stomach is a reason as to why it's tied to the holiday — after all, nothing says overeating like Christmas.

As for gingerbread houses, they became popular in Germany many years ago — and some, according to Fox News, believe that you can thank Hansel and Gretel for their surge in popularity. After the folk story, which originated back in 1812, claimed that the two stumbled across a candy house, people started wondering how they could create their own.

Pretty soon, decorating the houses just became part of the Christmas holiday, which is a bit intriguing. The fact that it's an interactive family activity also makes it fun for the winter holidays.

Many believe that these iconic and tasty men date back to Elizabeth I of England. She had them baked to resemble some guests she was expecting, and honestly, it sounds like she created the most unique party favor ever. There's also a story that women ate them to try and increase their chances of attracting a man. It's so silly, it may actually be true.

According to Epicure & Culture, gingerbread was sacred, and the only time it was allowed to be made by the general public was during Christmas and Easter. So, that's probably why it's seen as a Christmas delicacy. It's all in the timing. And once an association builds, it's just hard to shake.

This Christmas, when you eat your gingerbread (or, gingerbread-flavored items, at the very least) just think about how this delicious food became such a popular winter favorite.

More like this
10 Pumpkin Recipes That Are Way More Creative Than Pie & Lattes
By Rebecca Deczynski and Alexis Morillo
On TikTok, Tinned Fish Date Night Is The Latest Viral Food Obsession
By Emma Carey
10 Stranger Things-Inspired Halloween Costumes For True Fans
By Emma Carey
Bennifer, Kravis, & 14 Other Fun Celeb Couples Halloween Costume Ideas
By Emma Carey and Brittany Leitner
Get Even More From Bustle — Sign Up For The Newsletter