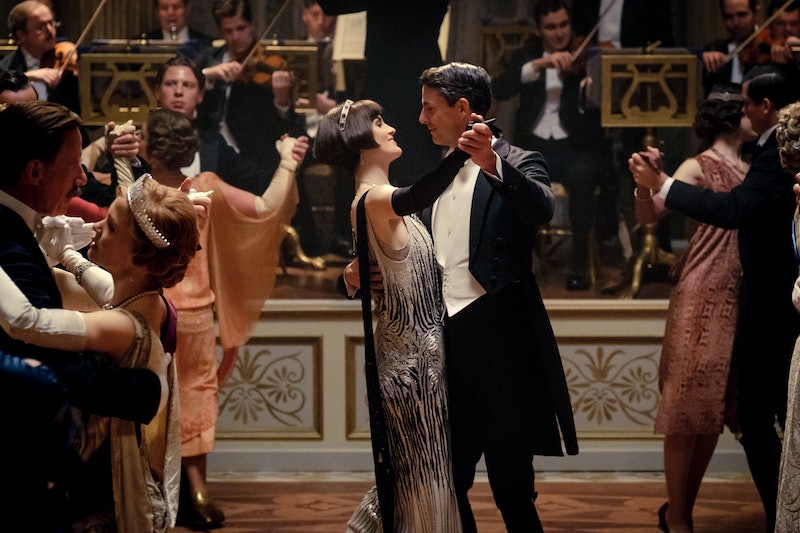 Anyone who watched Downton Abbey the TV series knows how dramatic and varied the storylines could be. There was a false imprisonment. A tragic car accident. A bride left at the altar. Mr. Pamuk died in Mary's bed! The list goes on and on. But when it comes to the Downton Abbey movie (out Sept. 20), there is one big event all the drama is centered around: a visit from the king and queen. The film is all about that royal visit and how the characters — both upstairs and downstairs — react to the occasion.

In October 2018, the downstairs cast were at Shepperton Studios in Surrey, England on their second to last week of shooting. The entire basement of the Crawleys' home was built again — Carson's office, the hallways, that well-known kitchen — and the actors were filming a scene in which the staff of the royal family were arriving. It's the royal staff that causes much of the drama for the Downton cooks, maids, and butlers this time around.

"Today we’ve been shooting a big group scene, which is very manic," says Sophie McShera says during a set visit Bustle was invited to by Focus Features. "It's when the royal staff have just arrived for the royal visit, and they're sort of taking over downstairs and we're a bit put out by it. My character, Daisy, thinks it's all a bit ridiculous because it's so over-the-top. And, yeah, it's sort of an invasion of downstairs."

While none of the cast members say which king and queen are visiting — they were wary of giving away spoilers so far out from the release of the film — the year in which the movie is set says it all. "We meet people of the time," says Raquel Cassidy, who plays Baxter (and who really got a kick out of the whole spoiler thing). "1927. So, there you go. Clue."

This means it'll be King George V and Queen Mary of Teck. As you might recall, George and Mary have been part of Downton Abbey before. They appeared when Rose attended a debutante ball and when the Crawley family listened to the King give a speech on their new radio.

The downstairs gang aren't confronting the royals, though; they're dealing with the people who work for them. This leads to the Downton staff coming together, just as they have in the past.

"The house is turned upside down and we have to deal with it, so it brings the whole house together as a unit," says Lesley Nicol, the actor behind Mrs. Patmore. "And that's what's kind of nice, and I hope that's what will be fun for the fans that it's Downton Abbey against the world, really. War breaks out, so they have to band together. And they do."

Cassidy feels similarly to Nicol. "It's really about the spirit of them as a group of people, not them as individuals so much, but who we are to each other and what we can do if we join forces and, not exactly take up arms, but put our hearts and minds to it, take a risk, do it together." She adds, "I think that's quite inspiring."

No one will say exactly what the Downton staff do to get back at the royal staff, but apparently, there's "a plan."

According to Kevin Doyle, who plays Mr. Molesley, "Everybody finds out that, oh well, they bring their own servants, and then we would all be sitting around twiddling our thumbs, doing nothing. And so we come up with a plan to circumvent that."

Even Thomas, who was often at odds with his co-workers over the seasons, joins in on the scheme. As actor Robert James-Collier explains, Thomas has been promoted to butler after Mr. Carson's retirement, but Carson is called back in for the big royal visit.

"Because Mr. Carson's took his job again, he's just sort of laughing at him and not helping," James-Collier says of his character. "But then I think after his experience in the gay club and getting called out by the law, it pricks his conscious and he rolls up his sleeves and gets stuck in with his old colleagues and helps the revolution to regain control of Downton Abbey, as it were." He adds, "Breaking Bad, it isn't."

(Oh, yeah. While a lot of the downstairs staff aren't getting in-depth personal storylines this time around, Thomas gets to hit up a gay bar. "He can finally for one night be free and be who he is and has a great old time until the cops from rumbling in.")

A couple of the Downton staff members have run-ins with particular new arrivals. Mrs. Hughes (Phyllis Logan) butts heads with Mrs. Webb (Richenda Carey), a royal housekeeper. "It is Downton Abbey and Mrs. Hughes is housekeeper of Downton Abbey," says Logan. "But Mrs. Webb’s contention is that whilst his and her majesty are in the house, then she's in charge, so that's a bit of debate and conflict."

There's also a situation between Andy (Michael Fox) and a plumber named Tony Sellick (James Cartwright). Andy and Daisy are planning to get married (thank, goodness), but the plumber's arrival means "the potential of a swaying eye from Daisy, so naturally, that gets Andy's back up a bit," Fox says. "It just adds an extra level of friction between him and Daisy."

As for what this royal visit will mean, not just for the downstairs staff, but for the movie as a whole, Joanne Froggatt, who plays Anna, teases that the film will feature some more extravagant scenes than the series did.

"[The visit] lends itself to some lovely big set pieces and big sort of grand scenes, which look incredibly cinematic and really beautiful," Froggatt explains. "But in terms of the characters and the stories and people's relationships, there's lots of stories that just sort of follow on. Just sort of following our favorite characters where they are along with their lives and just checking in to see, really."

Logan also speaks of the new chapter in story being the same Downton, just taken up a notch. "We're still as we were, with a few changes here and there," the Scottish actor says. "But there's all the glitz, there's all the glamor. There's even more glamor — not from downstairs, bedraggled downstairs — but there's more glamour than ever. It's Downton Abbey times 10, times 100 in the glamour stakes."

More like this
On 'The Handmaid’s Tale,' Christine Ko Fights Back
By Gretchen Smail
Everything To Know About The Long-Awaited ‘Community’ Movie
By Stephanie Topacio Long
Gabby Petito’s Family Responded To The New Lifetime Movie About Her Final Days
By Grace Wehniainen
'Peaky Blinders' Creator Shares Exciting Update On The Upcoming Film
By Sam Ramsden
Get Even More From Bustle — Sign Up For The Newsletter