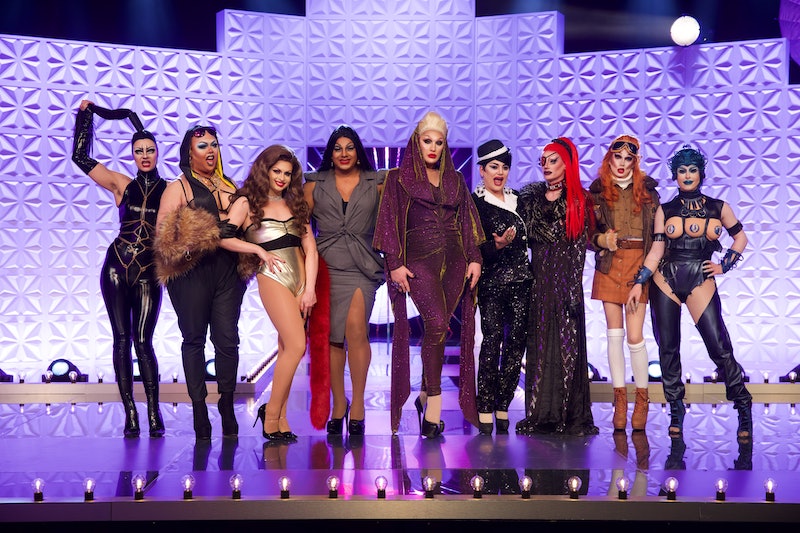 The battle to become Britain's next drag superstar is well and truly underway, and the first ever Drag Race UK queens are bringing their A-game to RuPaul's main stage in a bid to snatch this years crown. By now, fans of the BBC Three series will be more than familiar with the show's accompanying weekly podcast, which is fronted by I'm A Celebrity's Scarlett Moffat and Baby Lame. In a recent episode of the BBC podcast, it was revealed that the cast of RuPaul's Drag Race UK have a Whatsapp group, and we can only imagine the amount of tea being spilled in this iconic group chat.

Appearing on the latest episode of RuPaul's Drag Race UK: The Podcast was the recently eliminated queen Scaredy Kat, who when asked by Moffat if she'll keep in touch with her fellow contestants, revealed that Drag Race UK queens currently stay in contact over a group chat. Speaking on the podcast, Scaredy Kat replied, "There is a group chat.. we are just like a bunch of friends having a good time. I mean, I am bad at social media and bad at texting so I’m not that available but yeah, I keep in touch with all of them really, it is all very friendly…"

Hosts Moffat and Baby Lame were left shook by the revelation, which prompted the former-Gogglebox star to reply, "If you could see the look she is giving as she is saying that… I don’t believe you!" However, Scaredy Kat didn't seem phased by the reaction, and simply responded, "Its fine you don’t need to."

As reported by the Express, Scaredy Kat recently became the second queen to be eliminated from RuPaul's Drag Race UK, and following her exit from the reality-competition, Scaredy Kat revealed that leaving the series was somewhat of a blessing in disguise. Speaking about her time on the show, the drag performer revealed, "It’s sad to leave second; no one wants to leave the party early. But, between me and you, I’m not sure I could’ve handled another day. I learnt that although you might think you’re the best drag queen in the world when you’re alone in your bedroom, that may not translate in to the real world."

Scaredy Kat also gave insight into her plans for the forthcoming Snatch Game challenge — which sees contestants morph into some of the biggest names in pop culture. As the Express reports, the Drag Race star revealed, "I was going to do Russell Brand because he’s my biggest idol, he is (or was) crazy over the top, and like a weird Victorian cartoon man."

Despite the early exit, Scaredy Kat appears to be making the most of her Drag Race experience, and recently dropped the music video for her brand new single "Bedroom Queen." News of her venture into music was first revealed in a series of social media posts, and speaking on Instagram, Scaredy Kat revealed, "Well you thought she’d died and gone to kitty heaven. Hehe nope. My single AND music video ‘Bedroom Queen’ is out right now."

You can listen to the RuPaul’s Drag Race UK Podcast on BBC Sounds here.