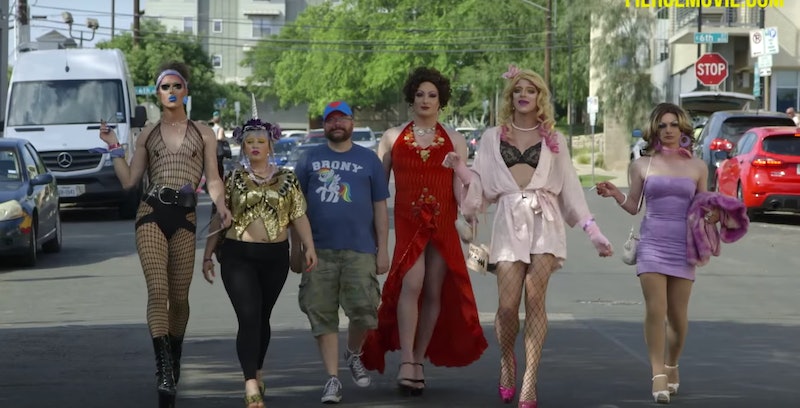 It looks like an ironic bolt of lightning struck twice at an Alabama movie theater. According to TMZ, the Henagar Drive-In — which recently canceled screenings of Beauty and the Beast because of the movie's gay character — almost screened Fierce, a documentary about the inner lives of drag queens and kings. Fierce is celebratory of the LGBTQ community and the people who make it great, but the film appears to be at odds with the rural theater owner's views on the subject matter. As a result of clashing ideologies, the theater decided to cut Fierce from the drive-in's screening schedule, TMZ reported. TMZ also claimed that the owner received backlash for banning Beauty and the Beast, but initially leaving Fierce on their line-up. Bustle reached out to the theater for comment, but has not received a response at the time of publication.

Fierce ended up on the screening schedule because of the owner's initial belief the film would be a "Game of Thrones-style film," according to TMZ. The movie poster referenced shows what appears to be a woman surrounded by dragons with the title Fierce written below. A quick glance might indeed leave one thinking that this would be another fantasy-action film, but, if you take a moment to inspect, it does become clear that it's an image of a drag queen. The situation is so morbidly amusing you have to sit back and wonder how the theater let it go this far. Surely a quick Google search would have averted this perceived blunder?

As mentioned above, this isn't the first time in recent memory that this movie theater made headlines for the films that were — and were not — selected to be screened for the residents of Henagar. About a week before this Fierce fiasco was reported, the Alabama theater announced they wouldn't show 2017's Beauty and The Beast because of LeFou's queer interpretation. Theater owner Carol Laney maintained in a telephone interview with the New York Times that she is not a "bigot" and knows people who identify as homosexual.

"We will not compromise on what the Bible teaches. You can feel free to come watch wholesome movies without worrying about sex, nudity, homosexuality and foul language."

Yet for an owner who chooses to run their business so vigilantly in line with conservative Christian values, the fact that she was somehow duped not once but twice by films that were either marketed in a covert heteronormative manner, or perhaps decided to add in an inclusive twist to a classic story, just leaves me wanting to laugh. It gets sillier the longer you think about it.

Clearly Twitter got a kick out of this too.

A possible silver lining to this whole situation? Fierce may end up getting a better publicity boost than expected, and that's great. The documentary itself looks like a beautiful, funny, and emotional look into the fight for equality in the LGBTQ community. Take a look at the trailer above and see for yourself why the fuss over the film should be positive, not negative.