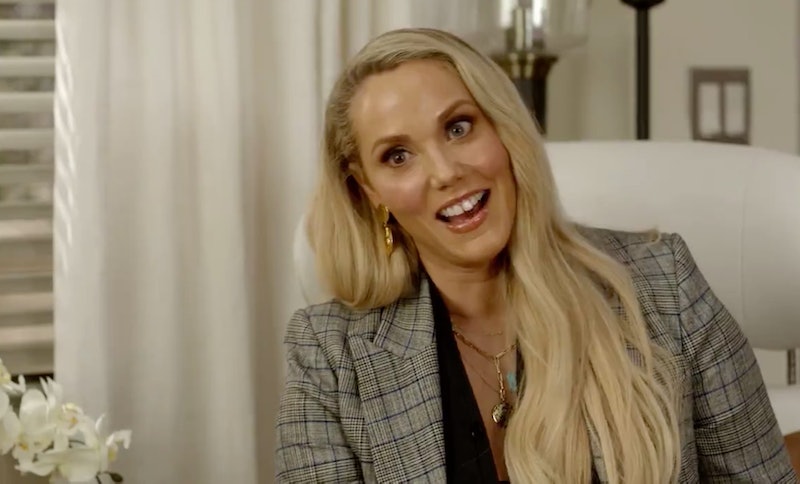 In the words of Jessie Spano, "I'm so excited!" After much anticipation, the Saved by the Bell reboot trailer finally dropped on Wednesday, April 15. The series is reportedly eyeing a 2020 premiere on NBC's new streaming service, Peacock, and after seeing all the throwbacks in the trailer, fans are going to demand it. After seeing Jessie (Elizabeth Berkley) and Slater's (Mario Lopez) reunion in the trailer, there's no going back.

The teaser opens with Slater saying to Jessie, "Remember how much fun high school used to be?" Jessie then declares, "Can you believe that was like 30 years ago?" Even though it's been three decades since the former couple attended Bayside High, Slater is still roaming the halls — as the school's gym teacher. He still seems like one of the kids, though, when he tries to give Zack and Kelly's son Mac (Mitchell Hoog) and Jessie's son Jamie (Belmont Cameli) relationship advice.

Meanwhile, there are quite a few callbacks to old school Bayside, including The Max, Zack's famous "time outs," and even Mac's outfits which certainly resemble his father's high school attire. Slater is also seen recreating that famous sleepover scene with his students. The SBTB reboot will follow both original and new characters, including Mark-Paul Gosselaar and Tiffani Thiessen returning as beloved duo Zack and Kelly in a few episodes, though neither are featured in the clip.

According to TVLine, the revival will see Zack (who is also the governor of California — for real) coming under fire for closing multiple low-income high schools. As a result, he sends the students affected by the closures to top-performing schools in the state, including Bayside. Per the logline, Zack's decision "gives the overprivileged Bayside kids a much-needed and hilarious dose of reality."

And while the SBTB reboot is definitely a blast from the past, it's not the only fan-favorite series being rebooted by Peacock. The site is also rebooting '80s favorite, Punky Brewster, with original star Soleil Moon Frye returning. Peacock is even rebooting Psych, sort of, bringing back the USA dramedy for a new movie event.

The Peacock nostalgia is real. Between SBTB and Punky Brewster, There's a lot to look forward to when NBC's streaming service launches on July 15.