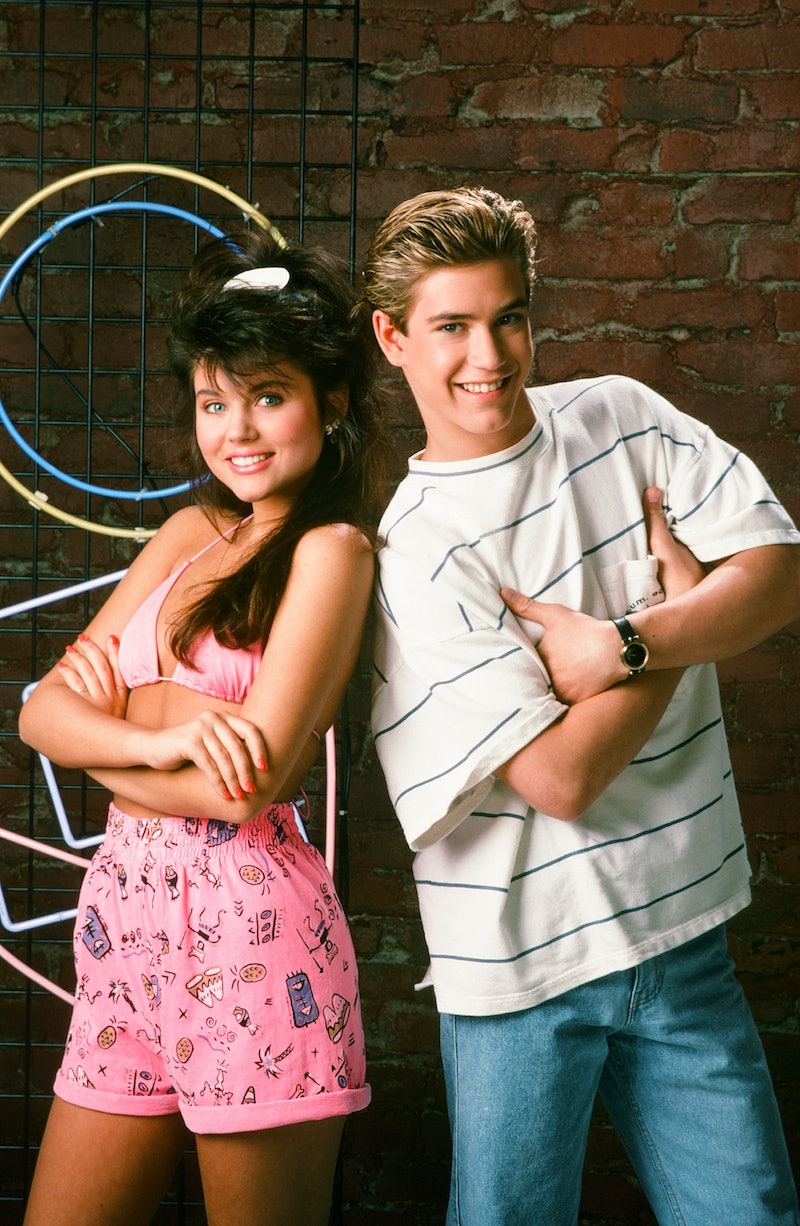 Zack is back. The first photo of Mark-Paul Gosselaar as Zack Morris in the Saved by the Bell reboot is here to make you so excited you just can't hide it. "One of these blondes is going be Zack Morris," the actor captioned the March 11 Instagram photo of himself getting his golden locks touched up in a makeup chair. His transformation even caught the eye of Kelly Kapowski, er, Tiffani Thiessen, who "liked" his picture from the set of the upcoming series for NBC's Peacock streaming service, which is scheduled to launch in April. (The Saved by the Bell reboot's premiere date has yet to be announced.)

NBC announced in Sept. 2019 that it plans to reboot Saved by the Bell with Mario Lopez and Elizabeth Berkley reprising their roles as A.C. Slater and Jessie Spano from the show that aired from 1989 to 1993. The series also spawned multiple spinoffs and TV movies. The Saved by the Bell reboot's logline summarized the new series as follows:

"When California governor Zack Morris gets into hot water for closing too many low-income high schools, he proposes they send the affected students to the highest performing schools in the state — including Bayside High. The influx of new students gives the over privileged Bayside kids a much needed and hilarious dose of reality."

After initially explaining he hadn't been asked to join the cast, Gosselaar eventually confirmed he will appear on the show, during a Jan. 8 Television Critics Association event.

"Everybody can sleep well at night," the actor, who's currently starring on ABC's mixed-ish, announced to TCA reporters, per Vulture. He added that it looked like fans would see Zack and Kelly return "in some capacity." The Hollywood Reporter confirmed via sources on Jan. 9 that the actor will appear in three episodes and that Thiessen was still "in talks" at the time.

Since then, Gosselaar revealed to TVLine how much Thiessen will appear in the reboot. "As far as I know, she will be in an episode or two with me," he told the website at SCAD aTVfest on Feb. 29, noting that she had been working on Netflix's Alexa & Katie. The actor added that their limited number of episodes "wasn't necessarily because of our desire to do it. It was more of a commitment to other things."

For his part, Lopez shared his own Saved by the Bell reboot first look via Instagram on Jan. 10. "Back at The Max..." the actor who played A.C. Slater in the classic '90s sitcom captioned the behind-the-scenes video of him and Berkley shooting a promo for the series.. "Talk about being in a time machine," she said, joking that she and Lopez still "look the same."

There's been no word on whether any other original cast members — including Lark Voorhies (Lisa Turtle), Dustin Diamond (Samuel "Screech" Powers), and Dennis Haskins (Principal Richard Belding) — will be involved. Additional new Saved by the Bell cast members will include John Michael Higgins as Bayside's new principal, as well as Josie Totah, who will play "a beautiful, sharp-tongued cheerleader and the most popular girl at Bayside."

Now that Gosselaar has transformed back into his iconic character, fans may just be seeing Zack and Kelly together again before they can say, "Time out."