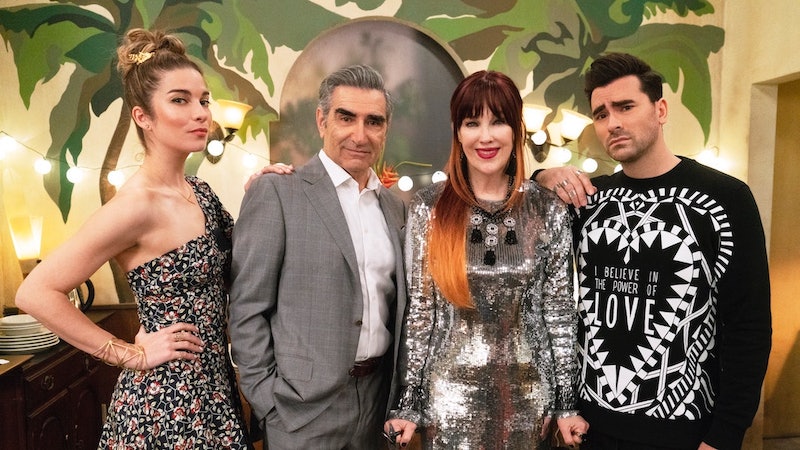 Oh, hello you! A new teaser clip for the sixth and final season of Schitt’s Creek is here and filled with exasperated screams. Ahead of the show’s Jan. 7 return, the Canadian sitcom’s Twitter account shared a brief clip on Monday that offered a glimpse of the Rose family’s shenanigans in the final saga of the Emmy-nominated series. In the teaser, matriarch Moira (Catherine O'Hara) is seemingly back on her feet on the heels of her Crows film being shelved and patriarch Johnny (Eugene Levy) bonds with his future son-in-law Patrick (Noah Reid).

The clip begins with Moira as she films a commercial for the town of Schitt’s Creek, presumably. With an introductory “Oh, hello you!,” she says in the commercial, “Won’t you join me for a little stroll through the slice of paradise I like to call… the town where I currently am?” Elsewhere, Johnny and Patrick erupt in cheers while watching TV together, David barges into Alexis’ room in the middle of an intimate moment, and Moira slaps a fellow town folk across his face. All of this is supplemented with different, dramatic variations of “ugh!” Given that the series will not return for a Season 7, “ugh!” serves as an appropriate sentiment.

Created by stars Dan and Eugene Levy, Schitt’s Creek follows the wealthy Rose family who move to the eccentric small town of Schitt’s Creek — their one remaining asset they once purchased “as a joke” — after they suddenly become broke. The series garnered a cult following upon its addition to Netflix earlier this year. In March, co-creator Dan announced the series would end at Season 6 despite the show’s newfound fanbase. In an interview with E! News, he explained that he didn’t want to push the show “past its expiry date for the sake" of another season.

He told the outlet, “I care too much about our viewers and about our characters to risk taking them farther than they need to be taken… So, it was always planned that this was going to be the end. And I really had no interest in pushing that any further and potentially compromising a good thing."

At an Emmys For Your Consideration event in May, Dan teased the “emotional” series finale. “It’s definitely been cathartic and lovely and sad and all the things that you would hope for,” he said, as per Variety. Emily Hampshire, who plays the beloved Stevie Budd, echoed the same finale sentiments in a recent interview with Bustle. “You will not only be satisfied, but pleasantly surprised and hopeful," she said. “I mean even if a fire burns down the whole motel and everyone in the town dies, you're still hopeful."