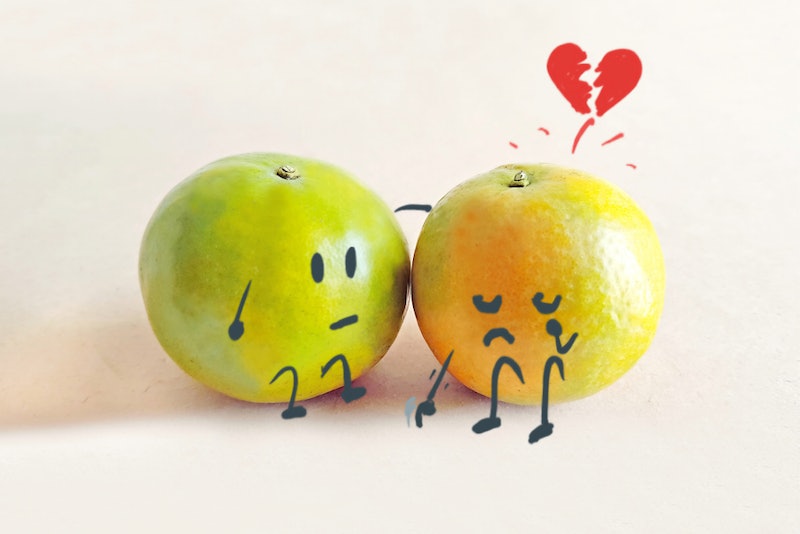 "Last Christmas I gave you my heart, and the very next day, you gave it away," the words of the late and great George Michael. For the rest of your Christmas guests, it was probably just background noise, but for you, they maybe felt all too real. This time of year is a terrible time to get your heartbroken — there's a long winter ahead — and I can assure you, you're not just being melodramatic about it. Losing someone takes a legit toll on your health. See for yourself — this is the science behind a broken heart.

As the Daily Mail reported on Dec. 28, new research surrounding the literal pain of a broken heart has been unveiled. It's not quite the heartbreak that the poets or Lana Del Rey sings about, as this reportedly has a legit medical term — "broken heart syndrome," or "Takotsubo syndrome" as it's more officially known.

According to the British Heart Foundation, the illness was first coined in Japan in 1990 and gets its name from the Japanese word for an octopus pot, whose unique shape supposedly resembles one of the heart's ventricles. How come no one got me an octopus pot for Christmas?

As the Daily Mail reports, it's said to affect around 6,000 Britons each year, and while the number of metaphorical broken hearts probably far outweighs that, Takotsubo syndrome refers specifically to the distress which causes some of the heart's muscles to temporarily shut down.

Literal and figurative broken hearts probably have the same cause though — a sudden emotional shock, which the Daily Mail says is often the result of "a bereavement or the breakdown of a relationship." If you're experiencing acute, debilitating pain, now's a good time to phone up the doctor's surgery, I reckon.

According to the Daily Mail, some signs that you could have Takotsubo syndrome include a shortness of breath and sharp, stabbing pains in your chest. While that might sound a bit like having a heart attack, what differentiates Takotsubo from something more serious is that, unlike a heart attack, it doesn't involve a blocking of the arteries. Either way, you should call 999 if you or someone you know is experiencing these symptoms — just to be safe.

The reason for the renewed interest in the condition actually stems from recent research conducted by heart experts at the universities of Aberdeen, Glasgow and Edinburgh, which can be found in the Circulation medical journal. This suggests that, scientifically speaking, a broken heart is caused by your immune system.

Professor Dana Dawson, who led the study, concluded that in their research:

"We found that broken heart syndrome triggers a storm in the immune system which results in acute inflammation in the heart muscle."

Whether that's the cause of the syndrome or just a reaction to it is still yet to be discovered. But for now, don't let anyone tell you to stop complaining about a broken heart, and make sure to get yourself the help you deserve. The science backs you up.