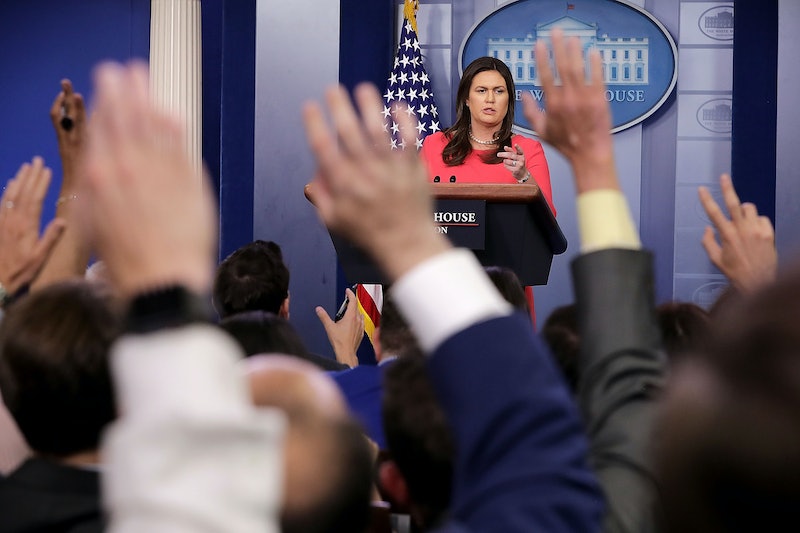 Following a coordinated effort by newspapers across the country to call out the president's repeated verbal attacks on the press, the Senate unanimously passed a resolution challenging Trump's "fake news" allegations. The non-binding resolution was proposed by Hawaii Sen. Brian Schatz, a Democrat and frequent critic of Trump, as a rebuke against the president, who for more than a year has referred to the press as an "enemy of the people."

The resolution “reaffirms the vital and indispensable role that the free press serves to inform the electorate, uncover the truth, act as a check on the inherent power of the government, further national discourse and debate, and otherwise advance the most basic and cherished democratic norms and freedoms of the United States.” While largely symbolic, the unanimous vote serves as affirmation that all 100 senators in a Republican-controlled Congress believe in one of the founding ideals of American government — the right to a free and independent press.

Frequent attacks on journalists and media outlets alike have become a hallmark of the Trump presidency. From his regular cries of "fake news" and threats of revoking press passes to the video he tweeted showing him beating up a WWE wrestler marked "CNN," the president has time and again lashed out against negative coverage of his administration. After The Boston Globe led more than 300 newspapers in featuring editorials denouncing the president's attacks this week, he tweeted, "There is nothing that I would want more for our Country than true FREEDOM OF THE PRESS. The fact is that the Press is FREE to write and say anything it wants, but much of what it says is FAKE NEWS, pushing a political agenda or just plain trying to hurt people. HONESTY WINS!"

The Senate resolution highlights the role of a free press in American democracy “to inform the electorate, uncover the truth, act as a check on the inherent power of the government, further national discourse and debate, and otherwise advance the most basic and cherished democratic norms and freedoms of the United States.”

Some Republican lawmakers like Sens. Jeff Flake and John McCain of Arizona have come forward to condemn the president, but the unanimous approval of the resolution shows the party's unease when it comes to attacks on the press is much more widespread.

Democratic representatives, on the other hand, have been much more vocal in their disapproval. Sen. Richard Blumenthal of Connecticut tweeted, "Our #FreePress is not the enemy—journalists work hard every day to bring us the truth. I stand with reporters & will continue to fight for their 1st Amendment rights."

Sen. Elizabeth Warren emphasized her home state's solidarity with The Globe, tweeting, "A free and independent press is one of the cornerstones of our democracy. I stand by the @BostonGlobe’s efforts to defend the First Amendment from @realDonaldTrump’s attacks, and to pursue and report the truth. #FreePress."

The White House has not yet responded to the resolution approval. And while there it carries no formal legislative action, the action of a Republican Congress reprimanding its Republican president for weakening Constitutional ideals remains significant.