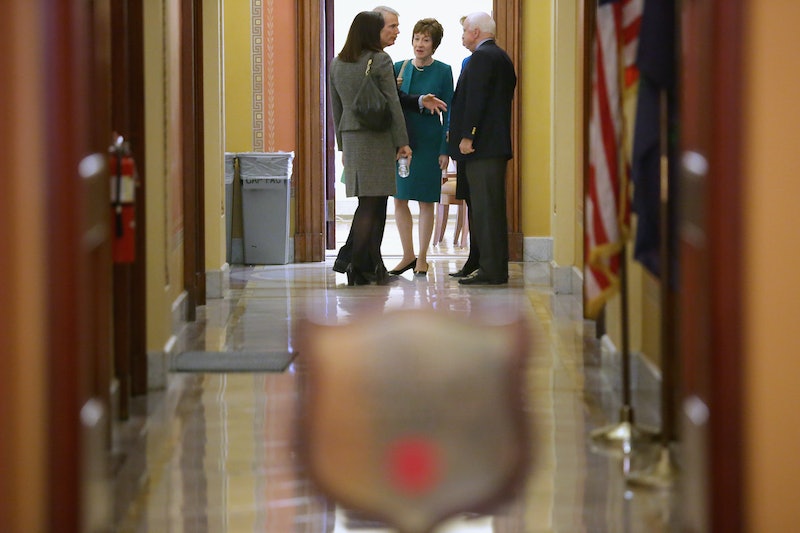 President Trump laid down his demands about health care, but not all of his party's senators thought it right to follow them. Now, the senators who voted against the skinny repeal are putting themselves directly in the face of the president's wrathful blustering. Joining all 48 Democratic senators were three Republican senators, Susan Collins, Lisa Murkowski, and John McCain, whose surprise "no" vote on the skinny repeal ultimately doomed it. Trump has so far only issued a reaction in the form of a tweet, but given his earlier, impassioned calls for Republicans to force through an Obamacare repeal, he's not likely to stop there.

In a speech from the Blue Room of the White House earlier this week, Trump strayed from typical political rhetoric and instead roundly insulted the Affordable Care Act, calling it "big, fat, ugly lie" and the "Obamacare nightmare." He painted a dark picture of the potential consequences of a failure to pass the repeal, saying that “the repercussions will be far greater than any of [the Republican senators] understand!” While he also spent some time bemoaning what he views as Democratic obstructionism, it's the Republican senators voting against the bill who are truly putting themselves in his line of attack.

The senator who has perhaps received the most direct threats from the president is Sen. Lisa Murkowski of Alaska. Reports emerged on Thursday that Secretary of the Interior Ryan Zinke had called both Alaska senators, saying that Alaska would lose access to some funding from the Department of the Interior if Murkowski did not change her mind and begin supporting the Republican repeal efforts. Murkowski and her fellow female Republican Senator Susan Collins have thrown up several roadblocks so far in Trump's administration, which he appears to resent. Collins, however, said that she had not received any similar threats from the Trump administration.

While Trump had previously lauded Sen. John McCain for coming back from Arizona for a vote, his most recent tweet signals that Sen. McCain may have fallen out of the president's good favor. Sen. McCain's vote was, after all, the most highly contested, with both Republicans and Democrats pleading with him in the run-up to the vote on the skinny repeal to side with them. While the senator from Arizona had voted yes in the procedural vote to allow the Senate to continuing debating the Obamacare repeal earlier in the week, Republican efforts to convince him of the bill's merit were not enough before the vote in the early hours of Friday morning.

Thanks to the 48 Democratic senators along with Republican Senators McCain, Murkowski, and Collins, the Obamacare skinny repeal has failed, and it's unclear which way the GOP can go next in their efforts to dismantle Obamacare. Repealing and replacing Obamacare was one of Trump's central campaign promises, so his reaction to these events is not likely to be good. For now, you can only wait and see.