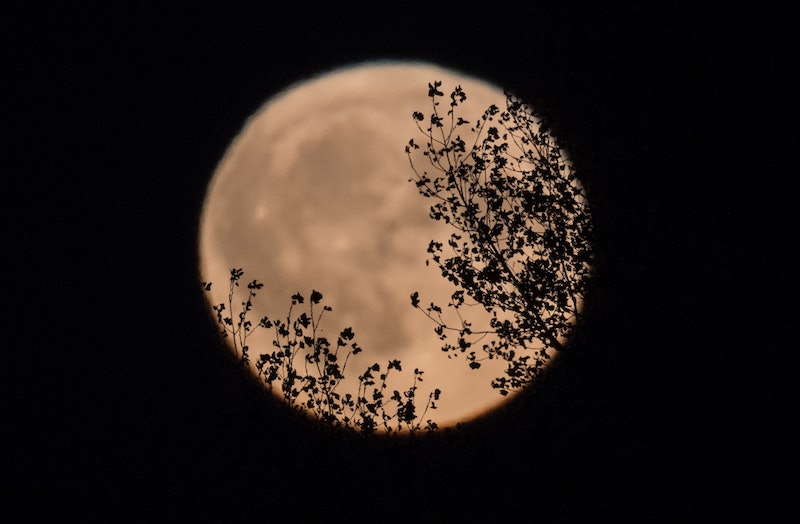 Cue the scary music because the September 2019 full moon falls on one of the spookiest days ever — Friday the 13th. Friday the 13th is such an ominous day that it even spawned a series of movies about a knife-wielding killer in a hockey mask. And having a full moon on Friday the 13th is so rare that the Farmers' Almanac reported it only happens about once every 20 years on average.

But there's a catch. The moon officially becomes full on Saturday, Sept. 14 ET at 12:33 a.m. This means that only people who don't live in an eastern time zone will experience the Friday the 13th full moon. East Coast peeps, you can breathe a sigh of relief.

In addition, it's widely believed that full moons lead to an increase crime and generally cause people to go a little bananas. When you put these two things together, it's easy to see how chaos can ensue.

Despite what people believe, there's conflicting information about whether or not there's a connection between full moons and an uptick in crime. A 1984 study published in the British Medical Journal followed crime in three areas — one urban, one industrial, one rural — over a five year period and returned surprising results.

However, a 2010 study published in the Journal of Criminal Justice tracked crime and moon cycles on San Antonio, Texas, over a five-year period and found no tangible connection between an increase in crime and the presence of a full moon.

Another study published in the British Medical Journal found that Friday the 13th can indeed be an unlucky day for some people, especially when it comes to driving.

"Friday 13th is unlucky for some. The risk of hospital admission as a result of a transport accident may be increased by as much as 52%. Staying at home is recommended," the study concluded.

Whether or not full moons and/or Friday the 13th lead to an increase in chaos, it's worth considering that thinking they do can result in more mishaps. When people are anxious or afraid of something, they're more likely to make mistakes and may be less likely to pay attention to their surroundings.

If this double-whammy bad-luck night is making you feel bajiggity, stay home and watch Friday the 13th instead of going out an experiencing it. If you do decide to venture out, make sure you look both ways before crossing the street. After all, you can never be too careful.

More like this
Here’s Your Daily Horoscope For January 31, 2023
By Mecca Woods
When Is The Next Full Moon? Your 2022 Calendar
By Nina Kahn and Brittany Beringer
These 3 Signs Are The Master Chefs Of The Zodiac
By Kristine Fellizar
Here’s Your Astrological Forecast For February
By Nina Kahn
Get Even More From Bustle — Sign Up For The Newsletter
From hair trends to relationship advice, our daily newsletter has everything you need to sound like a person who’s on TikTok, even if you aren’t.