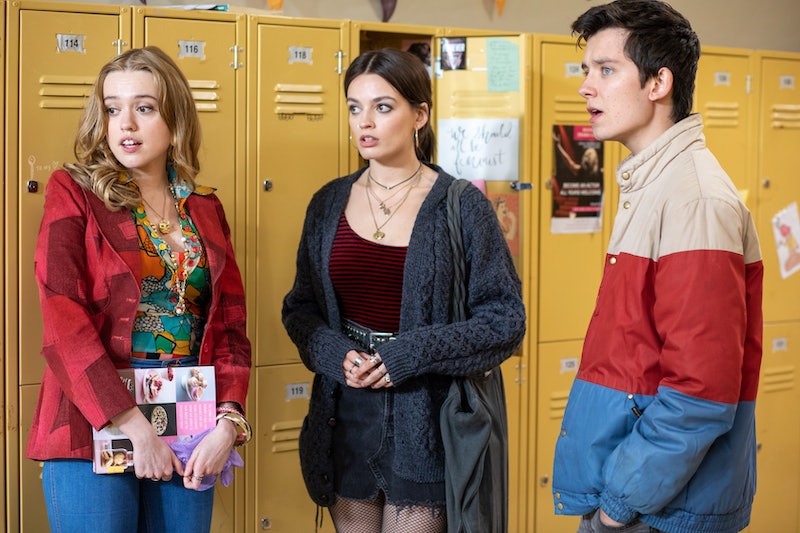 Laurie Nunn's hilarious and sex-positive Sex Education is back for Season 2, and with it comes more drama, more love triangles, and more delightfully honest and thought-provoking stories about the lives — and fantasies — of a group of British teens. Things really heated up by the end of last season, so a Sex Education Season 1 recap will help you to hit the ground running when you tune into Season 2.

In Season 1, Sex Education introduced several nuanced characters, with shy, virgin Otis at the center. The son of well-known sex therapist Dr. Jean Milburn, Otis realizes he can use his embarrassing familial connection for his own personal gain by opening a sex advice clinic with classmate (and crush) Maeve. Meanwhile, several other characters at Otis' school embark on their own journeys, to heartwarming and heartbreaking results.

It's not all sunshine and roses for Otis though. After a student nearly harms himself after getting advice from Otis, Otis tells Maeve he's shutting down the clinic. Otis is also still pretty upset at his mom after discovering she was writing a book about his sexual issues. And despite genuinely liking Ola, it's obvious that Otis has unresolved tension with Maeve.

Maeve is dealing with some pretty heavy issues when the season starts. She's living in a trailer park alone; she doesn't have any reliable friends or family; and she's in a secret relationship with star athlete Jackson.

Over the course of the show she starts officially dating Jackson, while growing closer to Otis and popular girl Aimee. Maeve slowly becomes happier, but her drug-dealing brother returning throws a wrench in all that. He causes a rift to form between Maeve and Jackson, and though he disappears by the end of the season, the damage is done. Maeve breaks up with Jackson, takes the fall for her brother's drugs that are found at the dance, and ends Season 1 facing suspension. After the dance, Maeve also realizes she has feelings for Otis, only to see him making out with Ola.

It's all a bit heartbreaking, but Maeve is still moving in a positive direction. She still finally gains some self confidence and proudly tells her teachers that she knows she's smart, and that she wants to better her own life. She ends the season single, but with a new bestie, Aimee.

Eric comes into his own

Season 1 has Eric grappling with his own sexuality and how he presents himself to the world. After Eric is beaten in his Hedwig and the Angry Inch costume, Eric abandons all his colorful clothes and makeup, and severs his relationship with Otis, who left him stranded that night to be with Maeve. Not expressing himself in any way makes him miserable though, which leads to him snapping at his band teacher and punching Anwar, the one openly gay student. After meeting an older, fashionable man though, Eric realizes he needs to just be himself. Encouraged by his father, Eric struts into the dance in a technicolored get-up and heels and reconnects with Otis. Eric also apologizes to his teacher and Anwar, who begrudgingly admits Eric's new look is good.

Eric's relationship with bully and headteacher's son Adam also comes to a head. Adam seemed to always have a bone to pick with Eric, and at the end of the season, the two are thrown into detention together. A physical fight turns into Adam kissing Eric, and then (it's implied) giving him a blowjob. Adam threatens Eric to not tell anyone, but later initiates subtle touches when they're in lab together. Eric's potential love is cut short though, as he watches Adam packing up to leave for military academy — the final straw broken when Adam attacked his father at the dance.

Jean finds her own romance in Season 1 with the gruff, widowed Jakob, the man who originally comes to her house to fix her bathroom. She ends up genuinely interested in him, and goes to Jakob's house to confess. They hook up, but Jean worries their relationship will upset Otis — which is a problem, since they're already fighting over her book. Jean admits she was wrong to write the book, but it appears she's still got a lot of work to do to get back in her son's good graces.

Jackson is an affable swim team jock, but underneath the smiles we learn that he suffers greatly from anxiety, and is being crushed under the expectations of the headteacher and his own parents. Alongside Adam's, Jackson's ending is probably the most somber one. He genuinely falls in love with Maeve during the season, but she breaks up with him after he confesses he paid Otis for tips.

The season ends with Jackson single, and with nobody actually looking out for his own emotional well-being. Poor Jackson; hopefully in Season 2 he finds someone who cares for him.

By the end of the season, still on a quest to get laid!