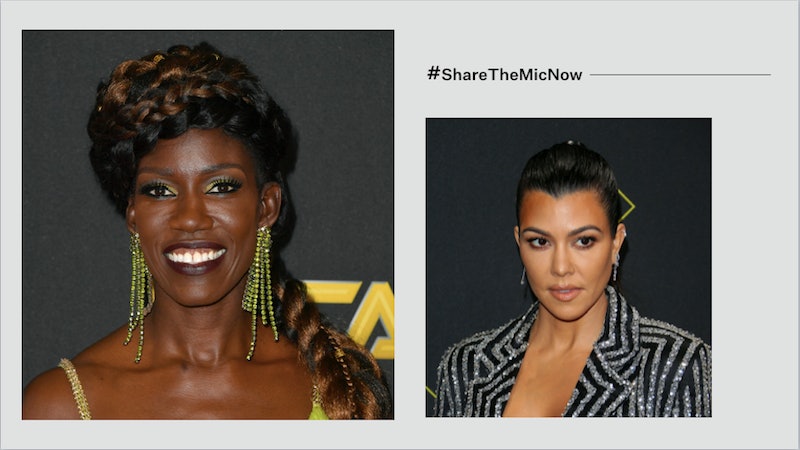 In a collective effort to amplify marginalized voices, the #ShareTheMicNow campaign will feature Black activists as they take over the Instagram accounts of white celebrities for the day. On June 10 beginning at 10 a.m. PST, prominent female celebrities like Julia Roberts, Kourtney Kardashian, Gwyneth Paltrow, Mandy Moore, and others will hand over their accounts to Black activists and figures like Elaine Welteroth, Tarana Burke, and Bozoma Saint John to magnify their voices and work in an effort to “catalyze the change that will only come when we truly hear each other’s voices,” per #ShareTheMicNow’s post on Instagram.

“When the world listens to women, it listens to white women,” #ShareTheMicNow’s post reads. “For far too long, Black women’s voices have gone unheard, even though they’ve been using their voices loudly for centuries to enact change. Today, more than ever, it is NECESSARY that we create a unifying action to center Black women’s lives, stories, and calls to action. We need to listen to Black women.” The campaign, which features nearly 100 celebrities and public figures, includes the likes of Elizabeth Warren, Busy Philipps, Katie Couric, Ashley Judd, Chelsea Handler, and Sarah Paulson as they give their platforms to the likes of Lindsay Peoples Wagner, Angelica Ross, Ibtihaj Muhammad, and Luvvie Ajayi Jones.

A full list that outlines which celebrity Instagrams the activists will take over is available on #ShareTheMicNow’s Instagram.

The campaign also calls on others outside of the coalition to take part on their own Instagrams. “The #ShareTheMicNow campaign was born from relationships," a statement from organizers read, per Elle. "We invite other Black and white women in relationships to recreate this action in their own spaces."

#ShareTheMicNow comes on the heels of nationwide Black Lives Matter protests following the death of George Floyd, the Black man who died while pinned under a white police officer in Minneapolis. While all four officers involved have since been charged, Floyd’s death sparked widespread discourse about police brutality and systemic racism. And this campaign isn’t the only celebrity effort that has arisen since Floyd’s death. Lizzo, John Legend, Ariana Grande, and more music stars signed an open letter addressed to New York politicians and the police department to demand police reform. The letter also called for the repeal of statute 50-A, a law that protects police officers’ personnel disciplinary records from the public.

Between the efforts to enact police reform and, now, the #ShareTheMicNow campaign, it appears that Hollywood is ready for change.

More like this
24 History-Making Black Women You Probably Didn't Learn About In School
By Ayana Lage and JR Thorpe
25 Inspiring Quotes From Black Women To Celebrate Black History Month
By Kyli Rodriguez-Cayro and JR Thorpe
Kim Petras Just Made Grammy History
By Jake Viswanath
All The Best Celebrity Reactions At The 2023 Grammys
By Brad Witter
Get Even More From Bustle — Sign Up For The Newsletter
From hair trends to relationship advice, our daily newsletter has everything you need to sound like a person who’s on TikTok, even if you aren’t.