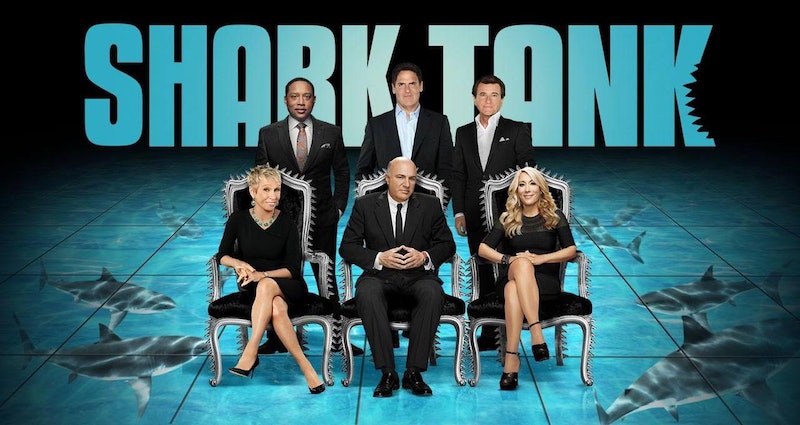 Have you ever wanted your Shark Tank episodes to come with more actual sharks? (No? Just me?) Well, either way, you're in luck because the so-called "Sharks" of Shark Tank have teamed up with Shark Week to talk about how to save real life sharks. In a special that airs on Discovery, July 25 at 9 p.m. the ABC stars are splashing into the reality of what is happening to one of the world's top predators.

The special — which features Mark Cuban, Daymond John, Barbara Corcoran, Kevin O’Leary, and Robert Herjavec — will educate and entertain viewers when it gives each judge a crash course in shark conversation projects. Instead of investing their money to bring a product to life, they each then have to argue for why their own ocean cause should win a $50,000 donation.

The episode synopsis reveals that the special will tackle such important topics as shark finning, plastic pollution, and how to better protect these ocean creatures. Entertainment Weekly reported that "habitat destruction, overfishing, and bycatch," will also be addressed.

There will also seemingly be a chance for Kevin O’Leary to dive with the sharks, and he'll be wearing a wetsuit with a suit printed on it. You know, in case you forgot he's a business man.

Some of those shark conservation topics may seem boring on the surface, but public knowledge in these areas is critical to the survival of these animals. Shark populations have fallen as much as 90 percent since 1950, according to CNN. Shark expert George Burgess told Bustle in 2017 that 30-100 million sharks are killed by human activity every year. That includes those killed in accidental fishing line entanglements, illegal fin harvesting, because of plastic pollution in our seas, and more.

Sharks, as apex predators, play a valuable role in our ocean's ecosystem. The waters need these creatures to help keep the sea healthy, and we need the oceans for our planet to stay healthy. Shark Week hasn't always been focused on education, but it has increased its efforts in recent years. This is an excellent example of how to make compelling television while also educating audiences. People love the Shark Tank stars, and hopefully these Sharks can get people to love and care about sharks.

While only one charity will win the $50,000 prize, all the organizations win because they will have the nation's eyes on their work for an hour on Wednesday night. This is the kind of awareness-raising that these organizations need in order to continue to carry out the important conservation work they do.

Shark Tank ratings show that the series can bring in 3-5 million viewers per episode, and 35 million people watched Shark Week in 2017. Having that many eyes focused on these efforts to protect sharks is crucial.

So, no matter which charity wins the money on Wednesday night, the real winners are the sharks — and that's really all you can ask for during a week dedicated to them.

More like this
Are Kayla and Seb From 'Too Hot To Handle' Still Together?
By Karen Fratti
Everything To Know About The 'Harry & Meghan' Netflix Documentary
By Jake Viswanath and El Hunt
Chrishell Stause Claims The PCAs Stopped Her From Bringing Her Partner G Flip
By Jake Viswanath
Silvio Scaglia's New Fiancée Has Something In Common With Julia Haart
By Grace Wehniainen
Get Even More From Bustle — Sign Up For The Newsletter