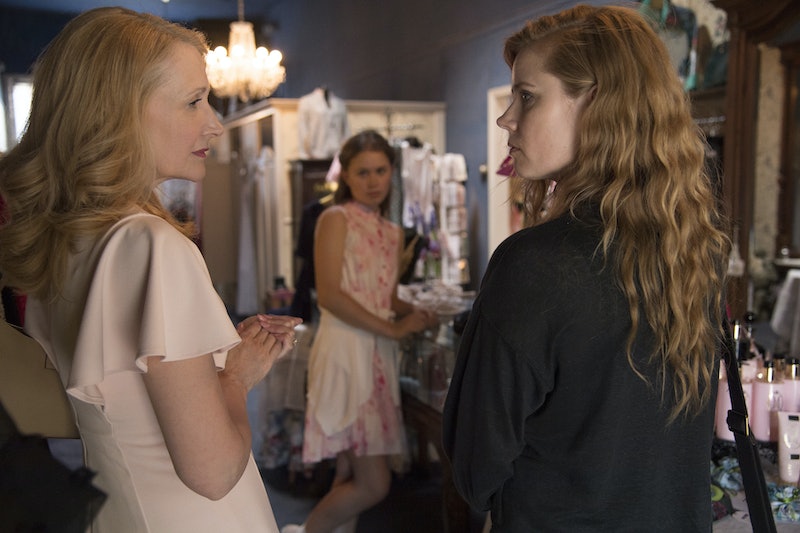 With a show as staggeringly beautiful as Sharp Objects, it's difficult to pinpoint just one thing that it does well. The acting is gripping, the cinematography is gorgeous, and the editing is masterful, yes, but perhaps the most fascinating aspect of Sharp Objects is the costumes. While Camille's wrinkled shirts and repetitive outfits may seem innocuous to the casual viewer, it's a very deliberate character choice. And no one knows these characters' sartorial choices better than their costume designer, Alix Friedberg.

"There's a real sense of timelessness throughout the whole show and Wind Gap and the way that the people are dressed," Friedberg tells Bustle. The Crellin house itself also played a big role in dressing Sharp Objects' main cast. "The canvas of the show is the set design," she says. "And the house is such a huge part of the choices that we made for costume, because they were such powerful colors." It's fitting that Camille, Alan, Adora, and Amma are physically tied to the home through their clothes, just as they're thematically bound in a toxic familial relationship. The results of Friedberg's research are authentic, lived-in wardrobes that perfectly emphasize the personality of each character. Here's exactly what went into crafting some of the show's most memorable looks.

More like this
'The White Lotus' Costume Designer Explains That Accidental 'Princess Diaries' Moment
By Grace Wehniainen
Here Are All 703 Outfits Rachel Wore On Friends
By Kat George
The First Trailer For 'That '90s Show' Includes So Many Nods To The Original Series
By Jack Irvin, Alyssa Lapid and Grace Wehniainen
The 'Ugly Betty' Cast Just Reunited In The Best Way
By Sam Ramsden
Get Even More From Bustle — Sign Up For The Newsletter