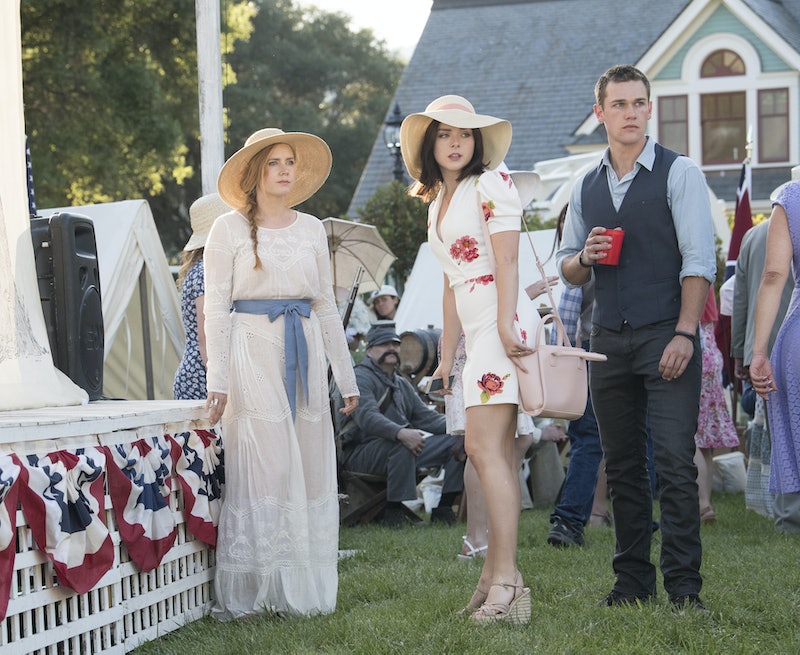 Major spoilers are ahead for Sharp Objects Episode 5, "Closer." "My backyard's about to be littered with Confederate flags," Camille (Amy Adams) tells her newspaper editor, Curry, at the front of the Aug. 5 episode of Sharp Objects. This week in Wind Gap, audiences are introduced to the town's auspicious festival, featuring the three Bs: beer, barbecue, and bigotry. So viewers would be forgiven if they assume that Calhoun Day is a real holiday.

The bulk of Episode 5 is spent with the townspeople as they mill around the Crellin's yard, gossiping, preening, and — every Wind Gapian's favorite activity — drinking. The episode unfurls like a play. The Crellin house is the stage, and nearly all of the events occur in its vicinity. One glance at Jackie O'Neil (Elizabeth Perkins) and her friends on the porch reveals that they're all vying for attention, as they pose with drinks in-hand. But they're immediately eclipsed by Adora (Patricia Clarkson) when she walks onto the porch, wearing an intricate, powder blue gown that looks more suited for a wedding than an outdoor barbecue. But, after all, she is the star of Calhoun Day.

So while this set-up all feels very real, Calhoun Day is not. Since Wind Gap is a fictional town in Missouri, it comes as no surprise that the town's Civil War festival was also concocted. However, it's to show creator Marti Noxon's credit that the festival seems so realistic. Not only does the holiday seem eerily similar to other Southern festivals (remember the Civil War reenactment from Sweet Home Alabama?), but it's exactly the kind of event that a small town would celebrate. Gilmore Girls fans may recall the fictional Battle of Stars Hallow, wherein the town militia waited in the snow for Redcoats who never arrived.

One such real holiday is Confederate Memorial Day, which is still observed by Alabama and Mississippi, per CNN. What's more, Slate reported that citizens in Florida, Georgia, and South Carolina also unofficially celebrate. In 2015, both Robert E. Lee Day and Confederate Memorial Day were struck from the Georgia state calendar, per the Atlanta Journal-Constitution. However, these dates are still observed and are now simply called "State Holidays." Naturally, some Georgians were not pleased with the limp gesture. "With a wink and nod they are saying, 'We are removing the name, but you know it’s a day that we celebrate people who supported treason and slavery,'" State Senator Vincent Fort told the AJC.

The story behind Calhoun Day, however, is viciously dark. Camille explains its significance to Detective Willis (Chris Messina), the audience surrogate. When the out-of-towner asks if the holiday is about Confederate pride, she corrects him, sarcastically, "We don't use the 'C' word here, sir." Camille goes on to explain that Zeke Calhoun, Wind Gap's "founding pedophile," fought for the South. "And his child bride, Millie Calhoun — she was my great, great, great grandvictim or something," Camille explains. "She was from a Union family."

"One day," the reporter continues, "the Union soldiers come down here to collect hubby, dead or alive. But brave Millie, who was with child — she refuses to give Zeke up — she resists. But it's how she resists that people in this town just love. The Union soldiers, they tied her to a tree, did horrible things to her — violations — but Millie never said a word. Lost the baby, the end, applause." "And this is a holiday?" Willis asks. "We don't have a lot of happy stories around here," she responds.

However, not only does Wind Gap celebrate the fact that Millie was raped, but they have children reenact the events. Camille's little sister, Amma (Eliza Scanlen), naturally plays the role of Millie, which she attacks with vigor. As three teenage boys pin her against a cardboard tree, she cries, "Hurt me if you can, but my wounds will heal strong than before! My scars will armor me! I will never give up my husband! I will never betray my town!" Adora, meanwhile, beams with pride at her daughter's convincing performance.

Calhoun Day is already shockingly offensive, and that's before you even get to the fact that it's essentially a celebration of racism. While many Southern cities still celebrate Civil War heroes, it doesn't make the festival any less troubling. Audiences already suspected that Adora was racist when they realized she employed a black maid who wears a uniform, but the fact that she hosts this event every year seems even more disconcerting. With everyone's timeless outfits, Confederate flags proudly on display, and Adora's imposing house in the background, the setting for this episode could easily be mistaken for the antebellum South and not present day.

Ultimately, Calhoun Day reveals the town's deep prejudices. Not only do its residents celebrate a child bride being raped, but several of the men in the crowd take off their sunglasses while Amma is being "violated," in order to get a better look. Not to mention the fact that no one can stop talking about who murdered Ann and Natalie. Camille's latest article is on everyone's lips, and several men have a pool on who they think the murderer is. Even Camille doesn't seem to care about the two suspects, John Keene or Bob Nash. They are both left devastated by her piece, and the two men break into a fist fight while Amma's play drones on. After all, Camille is a child of Wind Gap.