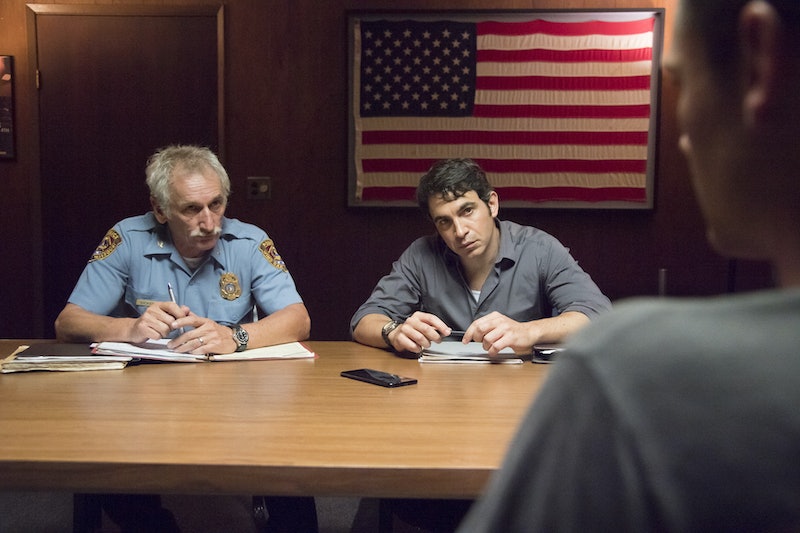 Major spoilers ahead for the Sharp Objects finale. As the finale draws to a close, justice seems to have finally been served in Wind Gap — but then the Sharp Objects finale post-credits scene changes everything. With only minutes to go in the episode, Adora Crellin is apprehended for the murders of Ann Nash and Natalie Keene, along with her own daughter Marian; Amma has moved in with her older sister in St. Louis, away from her mother's manipulative and harmful clutches; and Camille seems on the verge of some sense of closure, atoning for her inability to protect Marian by saving her surviving sister from certain death. But in a few short seconds, that entire happy ending is turned on its head.

Viewers should have expected a massive twist, given that Sharp Objects was written by the same author who brought readers the notoriously shocking Gone Girl. But the final revelation comes so late, and so suddenly, that it catches you completely off guard. It's not even the fact that Amma turns out to be the killer — Camille's younger sister was a frequent suspect for fans from early in the series, after all — but how that truth is unveiled that makes it so surprising. Given how many people had pegged Amma early on as the killer, the fact that Adora is arrested for the crime comes across as a twist… only for that "twist" to be hiding the long-suspected truth, which finally lands with an impact so heavy it feels like a bomb exploding.

After the mother of Amma's new friend drops by looking for her missing daughter, and after Camille finally realizes the horrible truth and Amma begs her sister, "Don't tell mama," the screen cuts abruptly to black. But don't turn off the episode yet, because a scene during the credits sheds even more light on this twist, for anyone disoriented by the suddenness of its arrival.

In just a few short seconds, viewers see flashes of Amma committing all three murders: strangling Ann Nash in the Wind Gap creek bed; bashing in Natalie Keene's head on the floor of Ashley's pool house; assaulting Mae against a chain link fence. It also confirms something some viewers may have suspected: Amma didn't commit these murders herself. Her two roller skating minions, trailing behind Amma in practically very scene, were by her side during those violent acts as well, holding down Ann and Natalie while Amma took their lives.

If you sit all the way through the credits, there's one more bonus scene at the very end as well: Amma, in her white nightgown, standing on the edge of the forest where Natalie disappeared. Earlier, Camille had envisioned her mother as the one luring the young girl into the woods; now, with the truth revealed, that vision is corrected to show the real perpetrator.

If that seems like an abrupt way to unspool the solution to a murder mystery… well, it's a pretty accurate adaptation of the book, where the truth lands just as abruptly. With only a few pages left in the final chapter, with Adora arrested for the murders and Amma safely ensconced in Camille's apartment, something terrible happens:

"On October 12, Lily Burke disappeared on her way home from school. Four hours later, her body was found, propped tidily next to a Dumpster three blocks from our apartment. Only six of her teeth had been pulled, the oversized front two and four on the bottom."

(Lily becomes Mae in the series.) The next few paragraphs detail Camille's discovery of the gruesome ivory floor in Amma's dollhouse, and sparse but graphic details of how Ann's and Natalie's murders were committed. The chapter concludes:

"Amma killed Lily all by herself, hit her on the back of the head with a stone, then strangled her with bare hands, plucked the six teeth, and cut her hair. All down an alley, behind that Dumpster where she'd left the body. She'd brought the rock, pliers, and scissors to school in the hot pink backpack I'd bought for her. Lily Burke's chocolate-colored hair Amma braided into a rug for my room in her dollhouse."

Readers are treated to a brief epilogue, in which Camille visits Amma in prison and hypothesizes about her sister's motive:

"Ann and Natalie died because Adora paid attention to them. Amma could only view it as a raw deal. Amma, who had allowed my mother to sicken her for so long. Sometimes when you let people do things to you, you're really doing it to them. Amma controlled Adora by letting Adora sicken her. In return, she demanded uncontested love and loyalty. No other little girls allowed. For the same reasons she murdered Lily Burke. Because, Amma suspected, I liked her better."

Viewers don't get that same epilogue; but one of the benefits of expanding a novel to an eight-episode miniseries is, audiences already have such a good sense of the characters that it becomes easier to fill in those blanks. Rather than leaving viewers with an explanation, HBO's Sharp Objects leaves them with a final flash of violence — committed against women, by women — and asks them to draw their own conclusions.