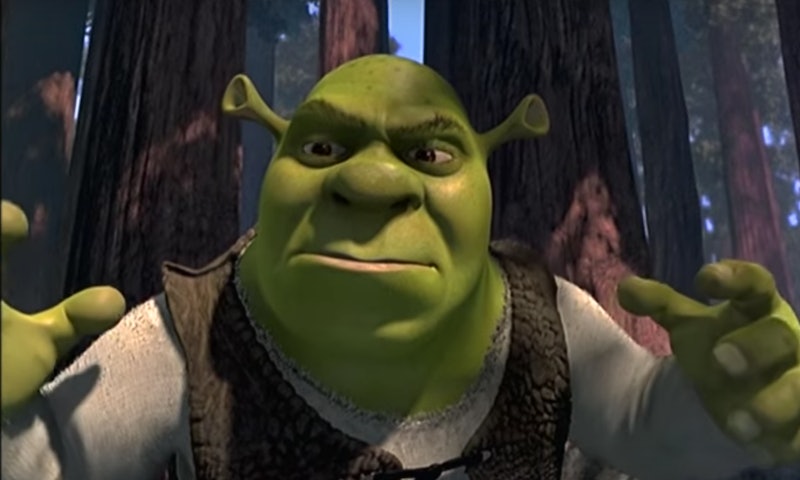 DreamWorks Pictures
By Nathan Diller
May 9, 2018

Shrek fans, rejoice. While there are no new updates on the beloved franchise's upcoming fifth film, the Shrek producer has plenty of other new movies on the way. John Williams announced a partnership with Riverstone Pictures for a new slew of animated films on Wednesday in Cannes, according to The Hollywood Reporter. The slate of films will be budgeted in the $15 to $20 million range, and they've already green-lit two movies.

Goose Chase is set in the world of Mother Goose characters, and according to Deadline, will follow the worst treasure hunters ever — Simple Simon and Wee Willy Winkie — as they search for the famed golden eggs in an effort to save their world and possibly win Little Bo Peep's heart in the process. Meanwhile, in The Silk Road Rally, characters from all over the world take part in a zany car race through the Silk Road trade route in China.

Both movies will be written by Charming's Ross Venokur, while Riverstone co-founder Deepak Nayar's Kintop Pictures and Williams’ Vanguard Entertainment will co-produce. Riverstone — which was started by Nayar and partner Nik Bower — is behind the upcoming adventure film, Show Dogs, which stars Will Arnett, Natasha Lyonne, and Ludacris, and is in post-production on a number of other films, including The Beach Bum, starring Matthew McConaughey and Isla Fisher, and At Eternity’s Gate, which features Willem Dafoe as Vincent Van Gogh.

“I have had a fantastic experience working with Deepak, and I am thrilled to be setting this slate together with him and Nik,” Williams said of the new venture, according to Variety.

Bower also voiced his excitement about the partnership. "With Show Dogs, Riverstone has already planted its flag firmly in the family space," he said, according to Deadline. "Animated movies are a natural extension of that enterprise. In every genre we look to partner with the finest talent working in the business, and we’re delighted to be embarking on this collaboration with Ross and John.”

They also have a few other films in the works, including Genetapets, which tells the story of a 13-year-old girl named Lulu who fights crime with her pets; Alien Rock Band; Brobots; and Zorgamazoo.

Williams sprinkled his movie-making magic all over each Shrek film, which were made by DreamWorks Animation and starred Mike Myers, Cameron Diaz, and Eddie Murphy. The first movie won the first ever Oscar for Best Animated Feature Film in 2002, and Williams also produced the follow-ups, Shrek 2, Shrek the Third, and Shrek Forever After, which came out in 2010. He also co-produced spinoff flick, Puss in Boots. As an indication of its enduring impact, fans were thrilled when it was announced the first two Shrek films came to Netflix this month.

While NBCUniversal, which owns DreamWorks, confirmed a fifth Shrek movie in 2016, there has been no official update on its status since. Screenwriter Michael McCullers told THR in March 2017 that he had finished the script and that the film was still in development. "It’s got a pretty big reinvention behind it that I guess I can’t really reveal," he said. "Reinvention was sort of called for. There’s been four movies and a lot of material, so the characters are pretty beloved and they’re great characters, but you also have to think of a pretty new take at that point."

The film is currently slated to be released in 2019, and in 2016 Murphy said they had "a nice script," according to CinemaBlend, but there's still no official word on whether Myers or Diaz will reprise their roles as Shrek and Fiona.

Hopefully news of Williams' newest venture is a sign that the fifth Shrek film is a-go, but regardless, fans will have plenty of other films to watch from the acclaimed producer soon enough.