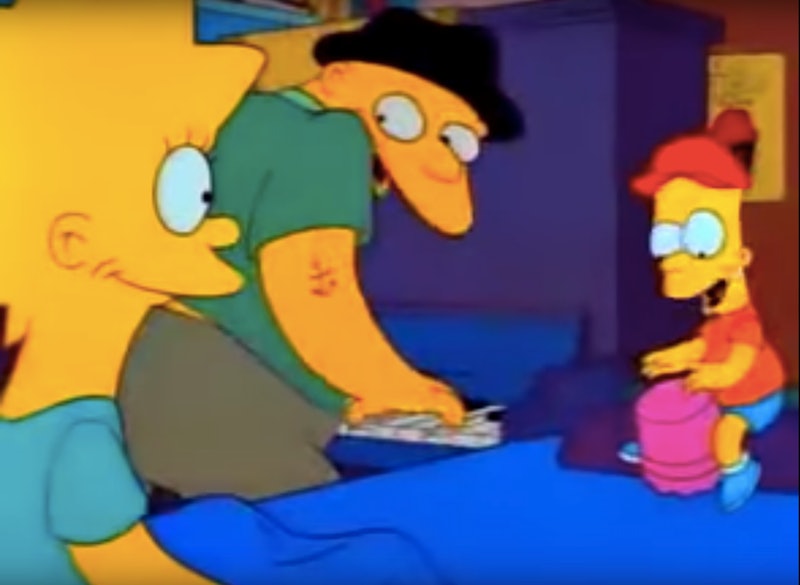 A wildly popular Season 3 episode of The Simpsons featuring Michael Jackson is being pulled in wake of the airing of HBO's Leaving Neverland documentary, according to TV Line. The news, which was revealed to The Wall Street Journal by the show’s longtime executive producer James L. Brooks on Thursday, March 7, came just days after the two-part documentary's television premiere. The documentary focused on allegations of molestation and sexual abuse against Jackson from Wade Robson and James Safechuck, stemming from their time with the pop star in the late '80s and early '90s. (Jackson's family denies all the allegations of abuse, and is currently suing HBO for $100 million for disparaging Jackson in the film.)

Speaking with the Wall Street Journal, Brooks explained why they decided to pull the episode, titled "Stark Raving Dad," saying, “I’m against book burning of any kind. But this is our book, and we’re allowed to take out a chapter.” The "chapter" — or episode — in question, "Stark Raving Dad," follows Homer as he is sent to a mental treatment facility after Bart takes a mental stability test for him. While settling into his confinement, Homer becomes friends with a stocky, gentle-voiced man who believes he’s Michael Jackson. Homer's patient-friend later admits that he is not Jackson, but rather Leon Kompowsky, a bricklayer who hails from Paterson, NJ.

When the episode originally aired in 1991, it was speculated that Jackson actually voiced the role, but it wasn't immediately confirmed. Fans would remain in the dark about Jackson's actual participation for years, until series creator Matt Groenig later confirmed to Australia Weekly that Jackson was, in fact, the voice of Kompowsky in 2018. He was credited under the pseudonym John Jay Smith for the episode, but was contractually unable to sing. Groening additionally shared that showrunners recruited the help of soundalike Kipp Lennon to record the singing portions of the episode, according to Deadline.

Given the fact that The Simpsons and its brand of humor does not typically confine itself to societal norms or what society deems to be "political correct," Brooks' comments suggest that the documentary struck a major nerve throughout the Simpsons family. It also further highlights the serious nature of the allegations being lodged against Jackson. Brooks added that this was a unanimous decision among the main creative forces behind The Simpsons. He told WSJ, “The guys I work with — where we all spend our lives arguing over jokes — were of one mind on this. It feels clearly the only choice to make." Vulture additionally noted that Simpsons execs were deeply affected after seeing the doc, calling the alleged behavior of Jackson out as “monstrous.”

The recent airing of Leaving Neverland has resulted in a great deal of blowback and renewed scrutiny of the many allegations of molestation against Jackson. Some viewers have denounced Jackson's alleged behavior and have begun calling for a silencing of all of his music and projects still in circulation — including, it seems, The Simpsons. As more people see Leaving Neverland, it stands to reason that those calls will only grow louder, though how radio stations, TV executives, and record label higher ups respond remains to be seen.