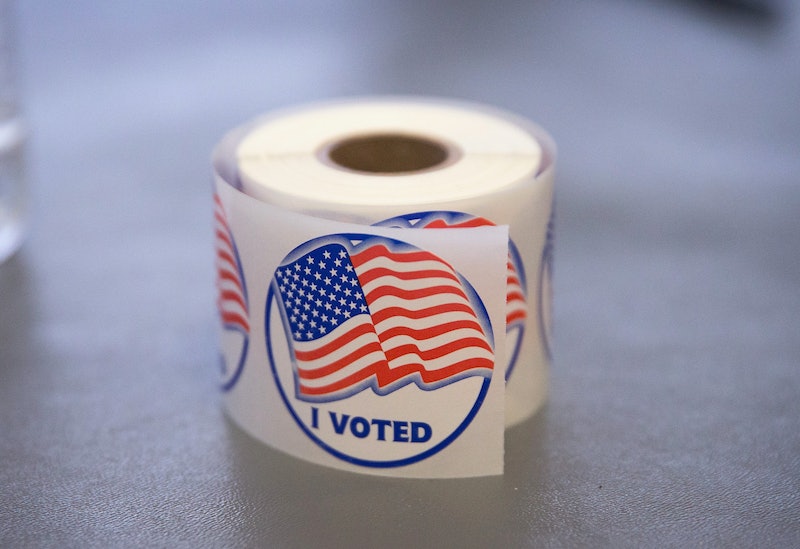 As the saying goes, all politics are local. For progressive Americans who live in overwhelmingly blue states, it can sometimes feel inconsequential to get involved in $20 million election campaigns where two Democrats compete for open office positions. Enter the Sister District Project, which matches progressive volunteers with state and local elections in which Democrats and Republicans are running against each other. Sister District is "a way to use our numbers to our advantage and allow people to channel their volunteer energy and resources across political boundaries to communities that share our values and need our help," Rita Bosworth, the project's founder, tells Bustle.

Bosworth founded the organization 10 days after Donald Trump won the presidential election in November, despite the fact that Democrats still won the popular vote by almost 2.9 million votes. While elected representatives from the same party may have similar values and policy proposals (albeit with some disparity), Bosworth says she wanted to create a strategic infrastructure in which money, energy, and supporters could be reallocated to help tip the scale in tight two-party races. This can eventually lead to large-scale policy changes on a national level.

"With such gridlock in Washington, cities and states are much more able to enact responsible policies that help their communities than Congress," she says. "Localities can be a testing ground for good policies that can be replicated across the country and at higher levels of government. And in order to have good and electable candidates on the ballot in national elections, they need to get experience in local and state elections."

So how does the Sister District work? When you first check it out online, the homepage looks like this:

The website provides several resources for getting involved in grassroots politics, including a volunteer form and links to organizations that actually help people run for office even if they're just getting started. It also lists exactly what volunteers are expected to do once they've been assigned to a district, including phone banking, participating in social media campaigns, canvassing, and making donations.

The Sister District Project is named like so because it builds a network of volunteers that get assigned to work on an important "sister race" with your local district during the election cycle, which generally runs from June to November. To find your district, visit this page and simply enter your zip code:

The organization won't begin to pair sister districts with volunteers until after the primaries in June, when there are candidates available to coordinate with the sister districts. Still, it's never too early to get involved. "I think it is clear that our citizens need to be more civically engaged, and we need to increase voter turnout," Bosworth says, adding that only about 55 percent of registered voters voted last year (about 27 percent of them voted for Trump). "People feel like their vote doesn't matter and that nothing they do will make a difference, so they disengage. We now know what happens when people disengage: a decisive minority of our country elects someone like Donald Trump to be our president. It is no longer an option to sit on the sidelines."

And, as bad as Trump's America may be, we've also seen real proof that political engagement works. Just think about what happened after the first temporary travel and immigration ban was signed into being by executive order: Protests erupted and the ban was halted. And as this viral Twitter thread reminds us, we've actually accomplished a lot during the past month.

The Sister District Project further shows that political efforts at the grassroots level are important because they allow everyone who's interested and willing to get involved. "You don't need to be rich or connected, everyone can join their local Sister District group and make phone calls to help better candidates get into office. When better candidates are in office, policy changes follow," Bosworth says.

Inevitably, we live in a two-party system in the United States. Even though political contention can increase tension in a government, Bosworth stresses that both parties should find common ground as well as a common starting point, which begins with acknowledging facts. "Nothing can come of a discussion if we do not have an agreement on a baseline of facts that are true and undisputed. Facts are facts. They do not change whether one likes them or not."

Although the Sister District's mission is to turn more red states blue, Bosworth says it's important for people from both parties to be open-minded and try to understand each other. "I don't claim to know how we can reconcile as a country, but I do advocate that we talk to people with different views and get out of our respective bubbles, listen first before responding, and be respectful," she says.

Ultimately, Bosworth says Sister District has turned into a community for like-minded people throughout the country who work together to support important causes. "I hope this helps people get and remain involved in civic action, and I also hope it gives people a better understanding of the importance of democracy and how each of us has a responsibility to work to maintain it," she says.