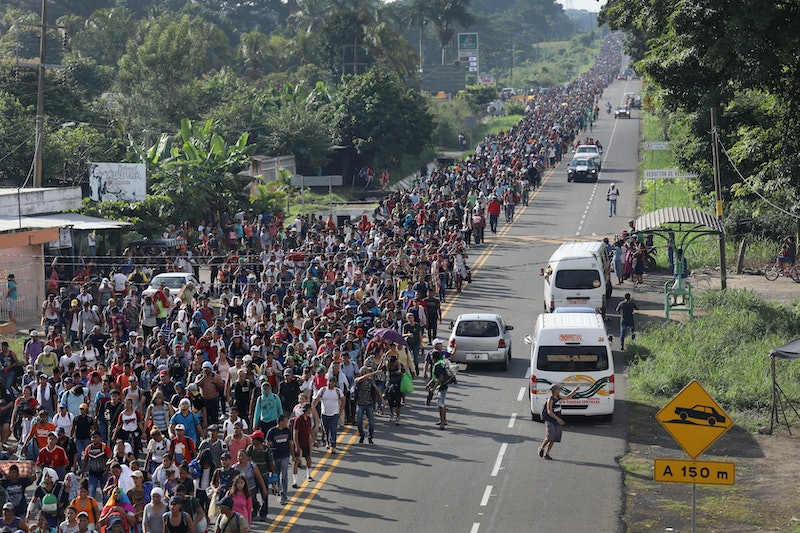 A large group of refugees are marching toward the United States, and according to multiple reports, it's growing in numbers. The size of the migrant caravan from Central America has expanded to more than 5,000 people, according to the Associated Press, and many of the people within it have been described as both optimistic and determined.

President Trump has repeatedly and consistently expressed his frustration that such a large group of migrants plans to attempt to enter the United States through the U.S.-Mexico border. "Full efforts are being made to stop the onslaught of illegal aliens from crossing our Souther Border," he tweeted on Sunday. "People have to apply for asylum in Mexico first, and if they fail to do that, the U.S. will turn them away. The courts are asking the U.S. to do things that are not doable!"

A few minutes later, Trump tweeted a followup. "The Caravans are a disgrace to the Democrat Party," he wrote. "Change the immigration laws NOW!"

Illinois Rep. Jan Schakowsky is among the Democrats rebuking Trump's characterization of the refugees. "Instead of admitting some responsibility in creating the violent situation in Honduras, President Trump is yet again scapegoating immigrants and refugees," she said in a statement released Thursday. "He is painting a picture of this migrant caravan as a threat to our national security instead of the desperate group of refugees that they are."

As of Sunday, the caravan was crossing, or attempting to cross, the Guatemala-Mexico border. Some were walking across a bridge that cuts over the Suchiate River, NPR reports, while others were swimming or rafting.

As they march, NPR reports, many of the migrants are shouting encouraging chants like, "Si se pudo!" “No one will stop us, only God,” Olivin Castellanos, a 58-year-old truck driver from Honduras, told USA Today on Sunday. “We knocked down the door and we continue walking.”

Though it is difficult to track where each person in the caravan originated, because people join and leave every day, many are traveling the thousands of miles from Honduras to the United States on foot in an attempt to flee poverty and violence, according to USA Today.

It's not clear exactly what will happen when the caravan reaches the U.S.-Mexico border. Those who arrive will likely have to choose between waiting in line to claim asylum, or else attempting to cross into the southern United States on their own. The latter could potentially lead to detention and prosecution for unlawful entry. Those who choose to claim asylum at designated entry points will likely face long waits, as was the case the last time a caravan of migrants traveled to the United States earlier this year.

As the caravan continues to cross Mexico, both Democrats and Republicans will likely keep an eye on their journey. And as the midterm elections creep closer and closer, the migrants and their desire to cross into the United States will undoubtedly continue to be politically polarizing, especially if Trump keeps tweeting about it.