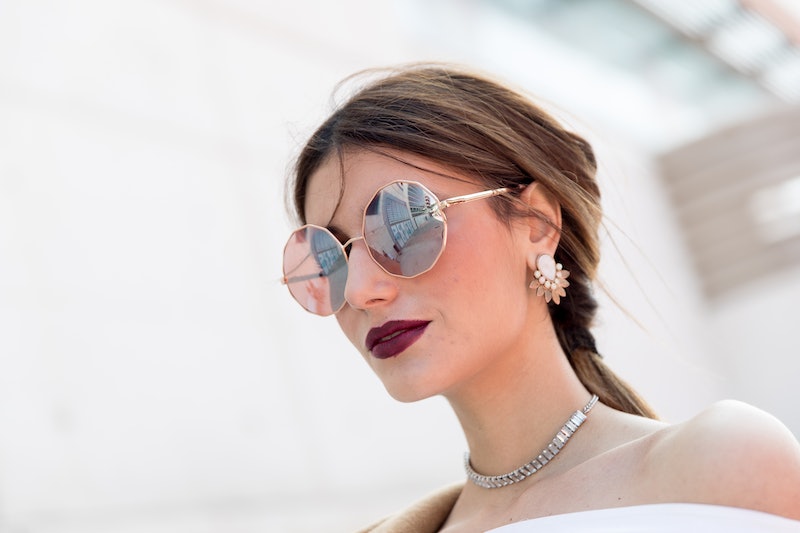 Chokers have always felt like such a '90s staple — from Sabrina the Teenage Witch to our impossibly cool grade-school babysitter, almost everyone wore them during the grunge decade. But what the real history of chokers teaches us is that there's more to the black velvet ribbon than we thought. It hasn't only been found in Delia's catalogs and teen's jewelry boxes, and it turns out it has taken more forms than just the plastic tattoo variety. (I know, I'm floored, too.)

Chokers have gone as far back as ancient Egypt, and have adorned the necks of royal Pharaohs and queens of England alike. While some were hammered with gold or strung with diamonds and pearls, others took the form of simple red ribbons bought from the market.

They were used by British teens in the 1700s as a way to mock the French, and kept being on-trend all through the Victorian era up to the psychedelic '70s where they showed up on men's necks more often than women's. Chokers have a long and interesting history, full of drama, glamour, gender-bending, and superstitions, making the simple necklace anything but simple. Ahead is the history of chokers; come see how far they've come.

1. They Had Healing Powers In Ancient Egypt

Chokers didn't begin with crop top-wearing pop princesses. They actually went as far back as our earliest civilization's: Ancient Mesopotamians and Egyptians donned the style regularly.

But instead of wearing it as a trend, they believed chokers had special and protective powers. They put jewelry on the parts of their bodies they felt needed the most protection — such as the neck, wrists, and head. Often made with gold (which symbolized the skin of the sun god Ra) or lapis, the used emblems offered different protections. "Besides their decorative function, necklaces served amuletic purposes. Amulets in the shape of one god or another comprised the numerous rows of necklaces. A string of hippopotamus charms, symbolizing the pregnant hippopotamus goddess Tawert, for example, might be worn by a pregnant woman to call for protection from this goddess of childbirth," Bob Brier and Hoyt Hobbs write in Daily Life of the Ancient Egyptians.

Rather than just being stylish, their chokers helped keep bad energy away and offered protection.

2. It Was Used As Mockery In 18th Century Britain

The French Revolution was an intense time during history: Riots started over a bump in bread prices, there was a widespread famine, and the monarchy was big on punishing countrymen with the ax. Not that the Brits were sympathetic for their neighbors across the way.

In 1790's England, young women wore red ribbon chokers as a way to thumb their noses at the beheadings that were occurring during the French Revolution’s Reign of Terror. "The red chokers were worn as taunts and derision because the Brits hated the French (still calling them 'frogs' centuries after French men began wearing formfitting bias-cut hose in the 15th century,)" Daniel Delis Hill, fashion historian and author of such books as History of World Costume and Fashion, tells Bustle in an interview.

But what was the cause of this bad blood? "Remember, just 10 years earlier the French helped the American colonists break from England. Plus there were on-and-off military skirmishes with France during the 1790s, eventually leading to the Napoleonic Wars," Hill explains. Wanting to mock the French during their struggles, red ribbon chokers became in vogue.

3. Queens Loved Them During The Victorian Era

The Victorians weren't what you'd call a drab bunch, and they loved to decorate and adorn themselves at any given opportunity. As Alexis Karl, lecturer at Pratt Institute who's done extensive research on Victorian customs, shares in an interview with Bustle, "A woman of Victorian society was a powered, gloved, parasol-carrying creature."

One such woman stood out more than others when it came to her commitment to jewelry, and that was Alexandra of Denmark, who became the queen after Victoria.

Said to have been influenced by Indian style and jewelry during her many voyages to India, she favored thick banded necklaces that were quickly nicknamed dog collars. But her love of sparkly diamonds worn close to the throat wasn't just for pure aesthetic — it also served a purpose. "It is said that she wore what was called a 'dog collar necklace' — a rather wide choker —because she had a scar on her neck from thyroid surgery and they covered it," Elyse Karlin, a Co-Director of the Association for the Study of Jewelry & Related Arts (ASJRA), shares with Bustle. "She wore them along with her diamond tiara and array of diamond brooches, often in the shapes of crescent moons and stars."

That isn't to say that she started the style, though. She wasn't what history would call a trendsetter. "She was an old lady when she became queen in 1901 and was much too conservative to be a fashion leader," Hill explains. "Actually, it was probably the other way around — she adopted the high stand-up collars and chokers of the late Victorian era and continued to wear them long after the style was out of fashion."

4. Poor Victorians Shopped Them, Too

As you could imagine, not everyone in Victorian England had the funds to spend an afternoon at the jewelers and dabble in the trend. Woven out of diamonds and pearls and luxe ribbons, chokers were often time only found in the elites' jewelry boxes. Not that women didn't try to copy in their own ways. "During the Victorian times women wore brooches and pendants on pieces of velvet which also served as a choker," Karlin points out. So as long as you had a family heirloom or enough money to go to the department store, the look could be yours.

And if you weren't handy with DIYs, the look later became so popular that it had a fast-fashion moment. "With mass production during the Second Industrial Revolution, every shop girl could afford a 10 cent velvet or ribbon choker with a white metal/faux jewel pendant. In fact, chokers of the late 1800s were so common that a variety was available in the mass-market wishbooks of mail order retailers for the middle class masses," Hill confirms. Whether you MacGyver-ed your own or got one from a catalog, the fad wasn't just for the upper crust.

Chokers trickled into the 1920s, though they weren't as hot of a commodity as they were just a few decades back. "You see some short necklaces worn with 1920s fashion. I would guess the short bobbed haircuts of the time allowed them to be very visible," Karlin explains. Intricate and fashioned into the Gilded Age's art deco style, they were heavy with pearls and diamonds and other precious gems — whether real or fake.

Chokers were revived again in the '70s, but this time by men. Rock stars like Mick Jagger, David Bowie, and Jimi Hendrix weren't strangers to gender bending, and they took the experiment into jewelry territory.

The '90s saw a resurgence of chokers, but rather than wearing the intricate, diamond-dripping art deco versions that were so popular during the first half of the century, we took it in a different direction. In a grungey, angsty direction, to be exact.

Women loved to wear fabric or velvet chokers with metal clasps or trinkets, which gave the wearer a '70s-London-punk vibe. "There was use of earlier punk styles with these chokers, such as padlocks, metal chains, and dog collars," Monica Sklar, an Assistant Professor and Liaison to the Historic Clothing and Textiles Collection at University of Georgia, confirms with Bustle.

But what exactly about a simple black ribbon gave off a rebellious or emo attitude? It had to do with the danger of an exposed neck. "The neck is a point of symbolism for slicing or removing the head from its position within the entire context of the body," Sklar explains. "The aesthetics of a straight line brings a completely different reaction from the viewer than curvatures, and the necklace used in a politicized manner could speak volumes about one’s feelings of vulnerability." Sklar goes on to explain that the necklace could also act as a symbol for reclaiming that powerlessness — the straight line across the throat is "faux self harm" so it's powerless, and so the wearer prevails.

Who knew your ASOS choker had so much symbolism? From ancient Egypt to emo kids in the '90s, the choker just might never fall out of fashion.

More like this
Are Skater Shoes the Next Y2K Trend to be Revived by Gen Z?
By Lauren Alexis Fisher
Most Comfortable Underwear For Big Butts
By Audrey Williams
The 11 Best Front Closure Bras For Big Boobs
By Maria Cassano
Dua Lipa's Hot Pink Sequin Bra & Skirt Are A Lesson In Barbiecore
By Allie Fasanella
Get Even More From Bustle — Sign Up For The Newsletter