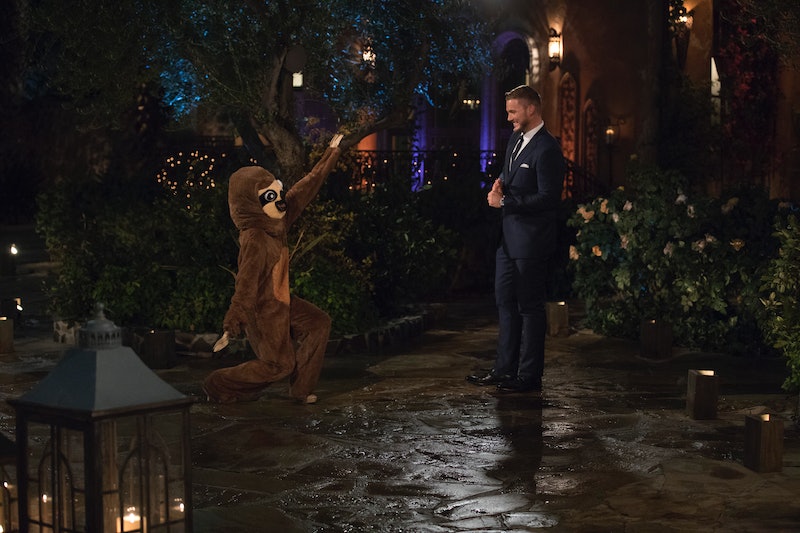 Limo exits on The Bachelor are often awkward. You have two people who haven't ever met before and one of them is trying super hard to make a great first impression — often through props or corny jokes or costumes. It's a recipe for disaster. But in the 20+ seasons this show has run, few entrances have been as cringe-worthy as Alex D.'s sloth limo exit on The Bachelor.

When she got out of the car to greet Colton, you couldn't even see Alex's face. She was completely dressed like a sloth. And she acted like one too. "Hi, Colton. I heard you take things slowly," she joked in a veiled reference to Colton still being a virgin. Only she said it more like this: "Hiiiiiii Coooollltttoooonnn. I heeeaarrddd youuuu taaaaaake thiiiiiinnggssss slooooowwwwlllyyyy."

Limo exits are usually super brief, and Alex's was basically a full two minutes. It took so long that the show went to commercial break in the middle of her intro.

It's not the costume alone that made this moment so cringe-worthy, though. It was the length of the encounter. There have been wacky costumes on the show before. JoJo showed up with a unicorn mask on Ben Higgins' season. Alexis dressed up like a shark (or a dolphin, if you ask her) for Nick Viall, and, on one season of The Bachelorette, a guy dressed up like a cupcake.

But those were a little awkward, a little dorky, and — most importantly — over with quickly. If a joke or stunt is bad, it's usually over before you can complain too much about it. When something awkward doesn't end for two minutes, it makes the whole moment 1000 times worse.

Add in the fact that when she finally did finish what she was saying, it was just another dumb joke about Colton's virginity, and the whole thing was super annoying. The Bachelor is already way too focused on Colton never having sex before, and this cringe-y entrance combined all the worst attributes of a limo exit. It lasted too long, it wasn't funny, and it mocked a subject that shouldn't really be the butt of a joke.

Then, to top it all off, Alex committed to the bit for practically the whole night. Even the other contestants didn't see her face until way later on when she finally took off the sloth suit. And she even kept up the voice for a portion of her chat with Colton later on in the night. It's one thing to want to make an impression. It's another to keep up a bit for so long that you get pegged as nothing more than the "sloth girl." Sloth girls don't win The Bachelor, I'm sorry.

Alex doesn't seem to have shaken her sloth reputation, though, because ABC listed it as her job in her bio. Technically, she's "an account manager for an IT staffing agency," but her bio also noted that "Alex talks fast, but tends to move slowly...verrrrrrrrrrry slowly." Um, if this sloth bit is a season-long thing for her, I'm not sure I can take it.

And Bachelor Nation couldn't either.

Here's hoping Alex is more than her limo exit proved herself to be. I can take a joke, but this one just wasn't funny.