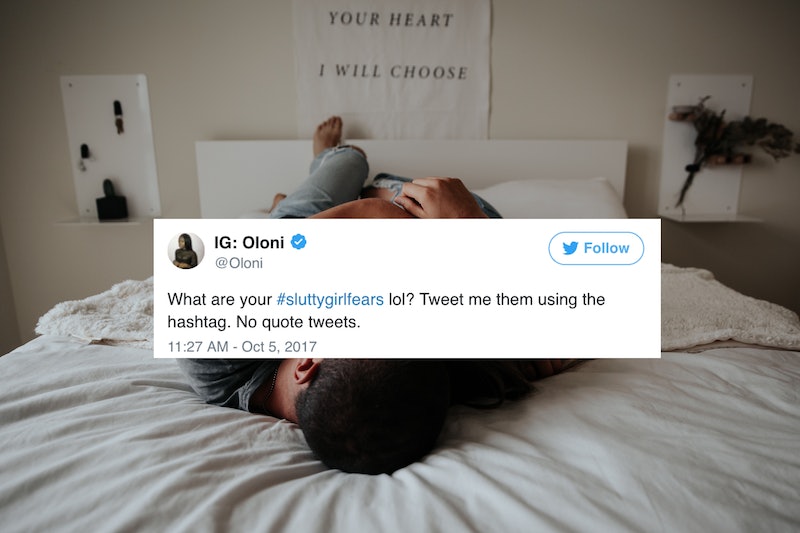 The days of laying back and thinking of England are long gone, but society still has more than a few hang-ups about female sexuality. While women enjoy sex just as much as men, they're encouraged to keep their sexual preferences under wraps. This taboo led sex and relationship blogger Oloni to create #SluttyGirlFears, a hashtag for women to talk about how societal expectations play into their sexuality. If you've ever wondered what to do with a particularly fabulous nude or debated whether to sleep with someone after meeting them for the first time, this is the hashtag for you.

Oloni, a self-described "host, influencer, and content creator," founded the women's platform Simply Oloni, for which she won a Cosmopolitan Blog Award in 2015. On Thursday, she kicked things off with a few of her own examples of #SluttyGirlFears, including "texting him and trying to navigate away from sex innuendos" and "remembering my libido will decline one day."

She went on to ask her followers to tweet about what worries them, and they quickly responded. In fact, they responded so quickly, one might think women have been waiting for the chance to openly talk about sex without fear of being judged.

Some talked about the delicate balance required to juggle multiple partners, especially when they start to overstep their boundaries.

Others talked about how awkward it can be to sleep with several people in the same social circle. Needless to say, running into all of them at once is a common #SluttyGirlFear — or should I say nightmare?

All #relatable jokes aside, one thing becomes clear as you scroll through the hashtag: Women are taught to abide by an arbitrary set of rules that dictate when they can initiate sex and how they ought to ask for what they want in bed. Far too many users posted about passing on sex not because they wanted to, but because they felt like they were supposed to.

When it came to nude photos, the same story played out. Even when they were inclined share photos of themselves, some women said they held back because they didn't want to be judged.

It all boils down to the fact that, according to social norms, men are sexual aggressors, while women are totally passive. (Research, by the way, has shown this to be completely untrue.) As a result, men can talk about their sex lives all day long, but as soon as women start to speak openly on the subject, they are labeled as sluts. The stigma runs so deep that some users wished they could join in the #SluttyGirlFears fun, but they were worried what their followers would think.

Unfortunately, these fears are justified. Women are routinely slut-shamed online for posting risque selfies, let alone nudes. Earlier this year, a Texas woman claimed she was fired from her job at a bank after a partially-nude boudoir photo shoot with her fiance went viral, and she certainly wouldn't be the first woman to be fired for similar reasons. For women, publicly embracing their sexuality can come with serious repercussions.

The good news is that #SluttyGirlFears has provided a much-needed outlet for women who want to talk about their sex lives. In an interview with Dazed, Oloni explained she also sees the hashtag as a way to reclaim the word "slut," showing that enjoying sex isn't shameful. "It's weird, because we're still being led to believe that women are incapable of being extremely sexually active with kinks and fetishes, which is a lie," she said. "The hashtag shows you that."

A single hashtag isn't going to change society overnight, but it's a start. Let's hope sex positivity is the biggest trend of 2018.