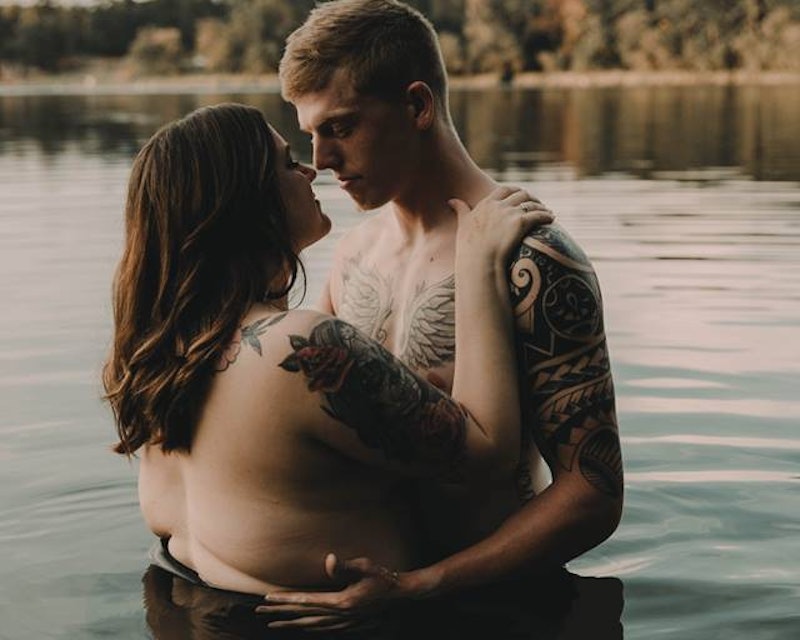 When Stephanie from Overton, TX posed for a boudoir photoshoot with her fiancé, Arryn, she felt confident, sexy, and beautiful. As a plus-size woman, Stephanie has no doubt been denied these positive feelings about her body by a fat-negative society. While the photoshoot was an act of radical body positivity, it came with body shaming repercussions. Stephanie says she was fired from her job for the body positive photoshoot, which her former employers called "inappropriate."

Stephanie and Arryn — whose last names were omitted from an original article posted on Buzzfeed— had a gorgeous lakeside shoot with photographer Bria Terry of Wolf & Rose Photography in Tyler, Texas. In the loving images, Arryn is shirtless and in jeans while Stephanie is wearing full-coverage swimsuit bottoms. Stephanie also reports she is wearing a backless, strapless bra in the shoot.

The shoot's empowering message not only come from Stephanie's choice to participate in a sexy shoot in a body negative society, but her consent in having the images posted on the internet. For instance, when plus-size blogger Callie Thorpe was pictured in a bikini in Vogue, she received vitriolic threats and outrageously disgusting commentary from trolls. The backlash led Thorpe to address the hatred she faced in a moving video.

There are countless other examples of plus-size women being ridiculed in vulgar ways when they choose to post even the most innocuous of images of body love online. Posting unapologetically sexy images, then, can be seen as an act of bravery on Stephanie's part.

But now, Stephanie, who is 20 weeks pregnant, has lost her job for the stunning shoot.

Terry posted the boudoir images to her Facebook where they quickly went viral. It was viral nature of the post, however, that caught the attention of Stephanie's bosses at Austin Bank Texas. Stephanie told Buzzfeed that she was told the company was a "family oriented company," and she was let go.

She also says the business accused her of doing a topless shoot, which she says is inaccurate as she was wearing a backless bra.

"There was no defending myself, they had made their decision," Stephanie tells Buzzfeed. "I gave over a year to a company that I worked really hard for and then to have them turn on me for doing something so positive, something that I was so proud of — to help myself as a woman — it was hurtful. People were pulling out their phones at work and showing the pictures, and that was blamed on me.”

Bustle has reached out to Austin Bank Texas for comment.

Regardless of Stephanie's release from her job, she is still proud of the shoot according to Buzzfeed — and she should be. While calling someone brave for merely existing in their own body shouldn't be necessary, it's undeniable that plus-size women face violent commentary about their bodies every day. Willingly making yourself venerable to such hatred and shaming in the name of body positivity through a public sexy photoshoot is, in fact, brave.

Stephanie even explained to Buzzfeed that the shoot helped her with her own self-esteem.

Terry captured the lakeside images of Stephanie & Arryn and spoke to Bustle about the shoot. She says this was her second time photographing the couple, and describes Arryn as kind and reserved, and Stephanie as "a ray of sunshine."

"You cannot help but like her," Terry says. "They are both so down to earth. For their engagement announcement, I captured them in their home drinking coffee, and even just in that, you could tell how much they honestly loved each other.

"I honestly hope they choose me to capture their wedding when the day comes. I would love to be a part of that moment."

Given Stephanie's alleged termination for the shoot, one must wonder if the same would happen to a straight-size employee. All too often, plus-size women celebrating their bodies and love is deemed unsightly rather than beautiful. And, too often, acts of body positivity are met with consequences, from abusive comments to social repercussions like job termination.

Regardless, we could all use the reminder that all bodies deserve celebrating.