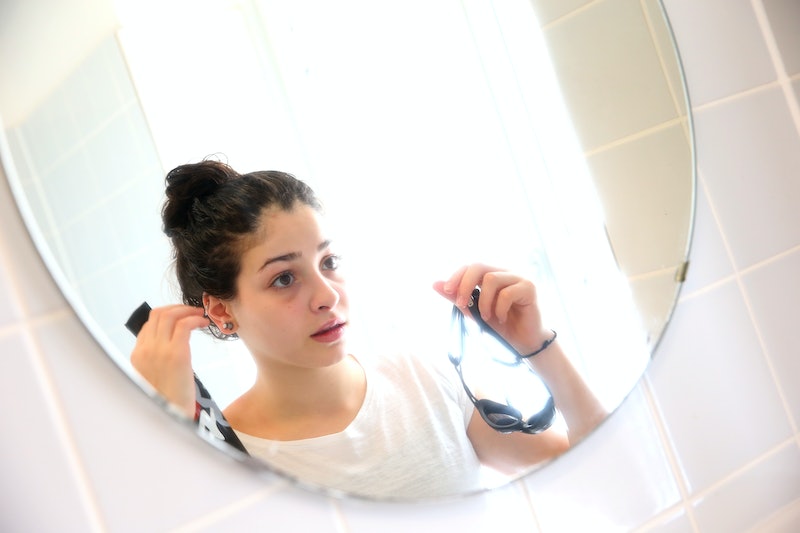 You know how aggravating it is when a man on the street tells you to smile? It sucks, it's literally harassment, and it's sadly super common. Now, a mirror is basically doing the same thing. You read that correctly. An inanimate object now has the ability to essentially catcall you. Yikes. The Smile Mirror literally forces users to smile in order to see their reflection, and if nothing else, it's a window into a dystopian future.

The Smile Mirror is actually a tablet device equipped with facial recognition technology. The mirror features of the tablet only activate when the person looking at it projects a smile that the AI (artificial intelligence) recognizes as “happy.” Before the user smiles, the device is opaque, and if the user relaxes their face, the mirror functionality disappears. Imagine trying to apply mascara while smiling. This mirror isn't even fully functional. I'm annoyed.

The device, which according to its creator, was inspired by cancer patients' "need" to smile, currently costs between $2,000 and $3,000. So basically, owners of the Smile Mirror are paying thousands of dollars to have the dude on the bus who always tells you to “Smile, beautiful” in the comfort of their own home. After the device launches on Kickstarter, the creator, Berk Ilhan, hopes he’ll be able to produce larger quantities and sell it for $500. Discounted in-home street harassment? Capitalism is weird, y’all.

Of course, Ilhan doesn’t see his device as a conduit for high-tech catcalling — he just wanted to raise folks’ spirits. "I learned morale and social support are two very important factors that can positively change a patient's experience," Ilhan told CNN Tech.

The reported intention behind the Smile Mirror is good. The creator described the benefits of his device to CNN: "Our facial expressions affect how we feel. If we flex our facial muscles to smile, our brains think that something good happened and as a result, [we feel] happiness."

But intent doesn’t equal impact. Forcing anyone, but especially cancer patients, to smile in order to see their reflection is weird and misguided. Cancer patients have enough pressure to stay positive, even though not being positive in the face of a deadly disease is a completely valid reaction. Chemotherapy is incredibly uncomfortable, and constantly being poked and prodded sucks. Though there are some proven benefits to artificial smiling on mood, it isn't appropriate to tout them as a therapy, or to force people to do it.

And besides, humans’ emotions are too complex for a mirror that recognizes a smile as the sole indicator of happiness. I cry when I’m overwhelmed with happiness and joy. Sometimes I grimace at things that are really funny. I’ve been known to sigh with euphoria. I do, however, sometimes smile when I’m about to tell someone about themselves in not-so-nice terms. Think Nicki Minaj after the infamous “Miley, what’s good?” comment. Could this device pick up Tyra Banks' iconic smize? I think not. The Smile Mirror doesn't have the ability to capture any of the nuances of human emotion.

It appears as if the Smile Mirror’s creator internalized the trite saying “Laughter is the best medicine.” I hate (read: love) to be the bearer of bad news, but medicine is the best medicine. If you really want to put a smile on someone’s face, try doing something that will elicit a genuine smile. Tell a funny joke. Play their favorite song or turn on a Chris Rock movie. Reminisce on the days when our country wasn’t being ran into the ground by a reality TV star. Heck, do the Funky Chicken. There are literally hundreds of better options if you want to “gift” someone a smile.