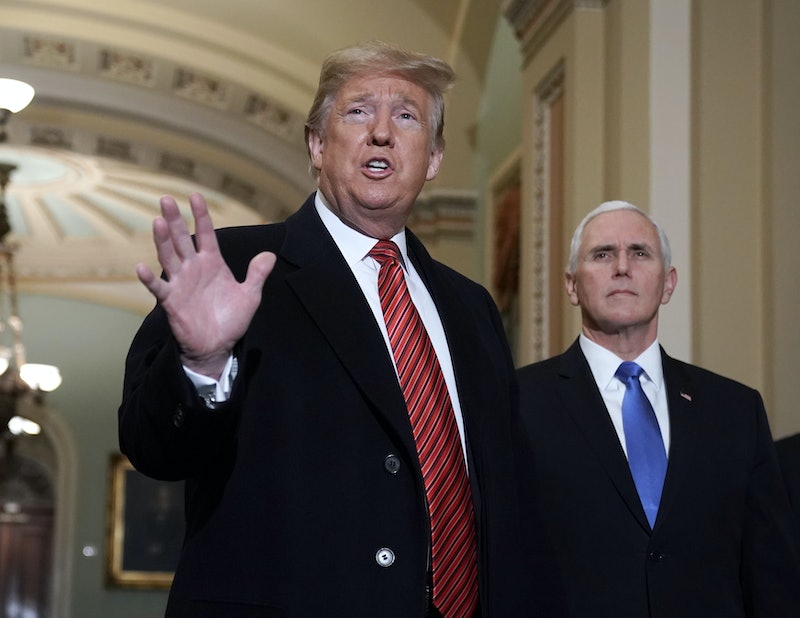 The bill would withhold the paychecks for the president, vice president, and members of the Congress if the government freezes over again. The idea is to make sure that powerful political figures felt the strain of not being paid during a government shutdown just like other federal workers, according to Golden's press release.

The official text of the legislation states that only when the government is funded in full will pay be distributed to the president, vice president, and members of Congress — like how both furloughed and essential federal workers have had their own paychecks withheld during the government shutdown.

A partial government shutdown began on Dec. 22, 2018, after President Trump refused to reconsider his demand for $5.7 billion in a spending bill for a border wall. That shutdown, which ended after 35 days, was the longest one in U.S. history, forcing hundreds of thousands of federal workers to miss out on two consecutive paychecks. In late January, Trump signed a short-term spending bill to reopen the government for three weeks — without the $5.7 billion he sought.

In a press statement, Golden said that it was "just common sense" for the president and others not to be paid if the government shuts down again. "This legislation will help prevent the American people from being political pawns for party leaders and help return sanity to the task of funding the government," Golden stated, thanking his colleagues Crenshaw and Rose.

Government workers should not have to bear the brunt of a "dysfunctional government," Crenshaw told the press.

Rose echoed his Democratic colleagues' sentiments and said, "Only in a town as broken as Washington do you still get paid when you don’t do your job. That’s wrong, and it’s past time to make it right."

The "stupidity" in that bill is an acronym for "Shutdowns Transferring Unnecessary Pain and Inflicting Damage In The Coming Years."

It's hard to say if either bill will ever pass, but it's clear that many lawmakers are not interested in another shutdown. With three weeks left for Democrats and Trump to reach common ground on the border wall, some lawmakers seem to be trying whatever they can to help federal workers from facing yet another episode of financial misery.