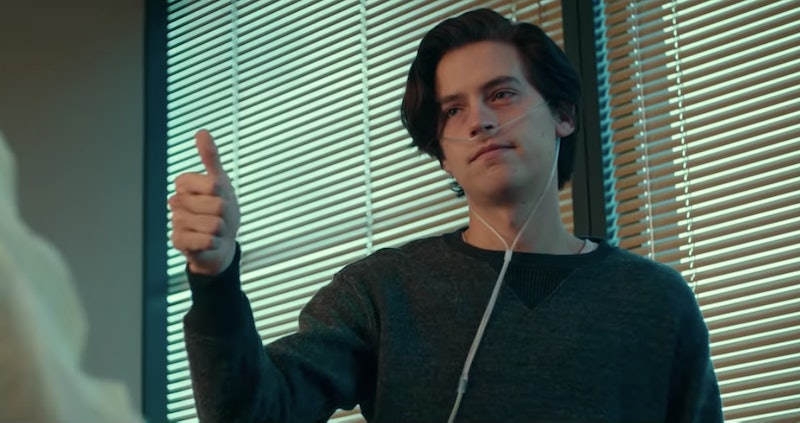 Finding love isn't easy, especially when you have to stay at least six feet apart. In the upcoming film, Five Feet Apart, Riverdale's Cole Sprouse and Support The Girls' Haley Lu Richardson play two people with cystic fibrosis, which means they can only get so close. But, a the song in the new Five Feet Apart trailer hints, these two are willing to fight for the chance to get a little closer even if their doctors definitely don't recommend it.

That song would be Andy Grammer's "Don't Give Up On Me," which soundtracks this love story, which may or may not leave us all in tears thanks to lines from Sprouse like, "Nothing's gonna save our lives Stella, we're breathing borrowed air." Don't worry, though, Grammer's song is a lot more hopeful than Sprouse's character Will Newman is at the beginning of this trailer.

The clip begins with Will introducing himself to Stella Grant (Richardson) by getting a little too close for comfort. "You think that's cute?" Stella questions, only to have Will retort, "Do you think it's cute?" It's clear that Will is a rebel, but one with a cause and a song in his heart. And it's one with a hopeful message.

"Cuz I'm not giving up," Grammer sings on the chorus. "I'm not givin' up, givin' up, no, not yet/ Even when I'm down to my last breath/Even when they say there's nothing left/So don't give up on me."

While this sweet love story could end up being a real tearjerker (hello, we've all seen The Fault In Our Stars!) the story behind how Grammer's original song ended up in the movie is undoubtedly a happy one. Five Feet Apart is the directorial debut of Jane the Virgin's Justin Baldoni, who was actually a roommate of Grammer's in Los Angeles when he first lived in Los Angeles.

Last month, after the first trailer for Five Feet Apart dropped, Grammer had a special message for the first-time director. "To @justinbaldoni, from being my 1st roommate in LA, crashing on each other’s couches, to now producing & directing your 1st film," he tweeted. "I couldn’t be more proud brotha! Having you use my song for such a special project means the world."

As for how he came up with this song, Grammer tweeted that the idea of not giving up on someone is "a simple idea but a very powerful one." Throughout his life Grammer says there have been those in his life who just didn't give up on him, including Baldoni.

When writing this song, Grammer was reminded of a time when he didn't have much going on in his life career-wise, "I was street performing and hadn't even met my manager yet," and Baldoni looked at him and said, "If I could buy stock in you I would."

It's something still sticks with Grammer to this day and he hopes this track ends up inspiring someone else to just keep going. "My sincere wish is that for anyone who hears this song and is on the verge of giving up," Grammer tweeted about the song, "it will be another subtle nudge to keep going. It's coming very soon."

While fans have to wait until March 15 to see Five Feet Apart in theaters, they can keep pressing repeat on Grammer's new song. Hopefully, with a box of tissues very close by.