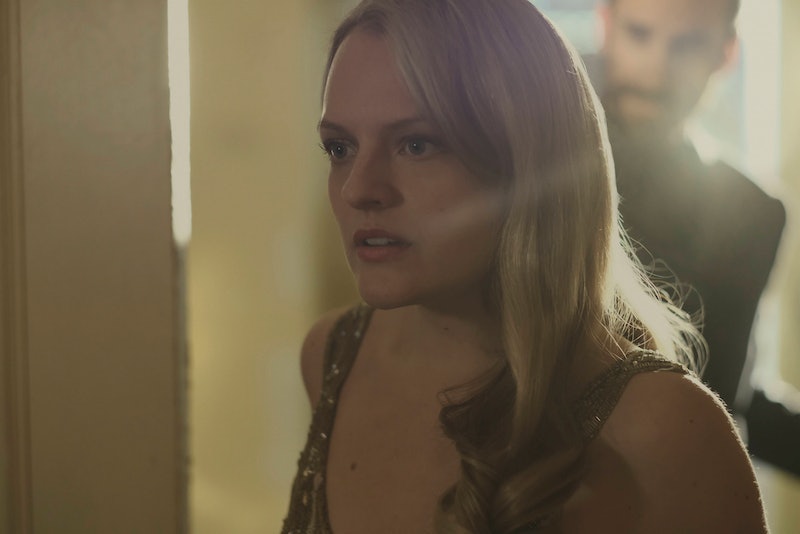 Try as they might, no dictatorship can deny human nature — not even the Republic of Gilead. That’s the idea at the heart of “Jezebels,” the eighth episode of The Handmaid’s Tale which explores how the country’s new fundamentalist regime still finds a way to objectify women even when it is forbidden. At the end of the episode, Mrs. Waterford returns with a gift for Offred: a girlish music box from her childhood home, which reveals a little pink-tulled ballerina that dances when the box is opened. Of course, this being The Handmaid's Tale, even the song that the music box plays carries an important meaning behind it.

There is, of course, potent symbolism just in the idea of Offred being given such a gift. As she says in the voiceover at the end of the episode, It’s “the perfect gift, a girl trapped in a box. She only dances when someone else opens the lid, when someone else winds her up” — thus mirroring Offred's experiences as a handmaid, who is not permitted to make her own decisions and must entertain her commander even when it endangers her. But the song that the music box is playing comes with its own noteworthy meaning, too: it’s the “Swan Theme,” sometimes also called “Song Of The Swans," from Tchaikovsky's Swan Lake.

While the leitmotif appears in several parts of the ballet, the most well-known and recognizable version comes from Act II, scene No. 10 (and sorry in advance for the chilling feeling you’re going to have deep in your bones for the rest of the day, it’s just that kind of song):

As anybody who grew up watching The Swan Princess (or Black Swan, if you’re a bit more erudite in your tastes) probably knows, Swan Lake tells the story of a beautiful woman — the Swan Queen, Odette — who has been transformed into a swan by an evil sorcerer, Von Rothbart, and can only return to her true form at night. The wandering Prince Siegfried swears the break the spell, but is deceived by the sorcerer into declaring his love for another. In the traditional ending of the ballet, both he and the Swan Queen choose to die together, which frees the other swan-maidens from Von Rothbart's spell.

Just in this episode alone, striking parallels can be made between the stories of Odette and Offred. Like the Swan Queen, she has been transformed into a meek and submissive creature by a powerful man who seeks to control her, along with other “maidens.” At night and under the right circumstances, she is made to return to a form that is more recognizable — her makeup, hair and nightclub attire seem less alien to the modern-day viewer than her red frock does. But there’s no joy in her transformation; it’s only so that she can be more pleasing to the men around her, and as she tells Moira, it’s temporary.

Of course, despite Nick's affection for Offred, he is no Prince Siegfried; not only has he willingly chosen to participate in the society that now oppresses her, but he also has no intentions of letting their relationship go so far that it ends in tragedy, even though Offred is more than willing to take that risk just to feel some agency in her life. In a way, he has betrayed her, too, not by directing his emotions toward the wrong target but in refusing to engage with them at all.

I would be hard pressed to believe that this wasn’t a deliberate choice on the part of the showrunners and design team. “The Swan Theme” is one of the most easily identifiable ballet songs of all time, certainly, but that it also conjures the image of a woman cursed to live as something other than what she is feels too appropriate not to be the point of its inclusion.

Margaret Atwood once said in an essay for The Guardian that in creating the dystopia at the heart of The Handmaid's Tale, she strove not to invent horrors but to borrow them from somewhere else. "I made a rule for myself," she wrote. "I would not include anything that human beings had not already done in some other place or time, or for which the technology did not already exist." It's no surprise that the TV adaptation does the same thing, with various real-life allusions to culture and media that bring deeper meaning to Offred's torment — even in the case of something as small as a music box.

More like this
Everything To Know About The HBO Max & Discovery+ Streaming Service Merger
By Brad Witter
An Ultimate Guide To The Music Of 'Rap Sh!t'
By Brad Witter
Everything To Know About 'Loot' Season 2
By Kadin Burnett
Does 'Locke & Key’s Ending Mean There Could Be A Season 4?
By Sophia Moore
Get Even More From Bustle — Sign Up For The Newsletter