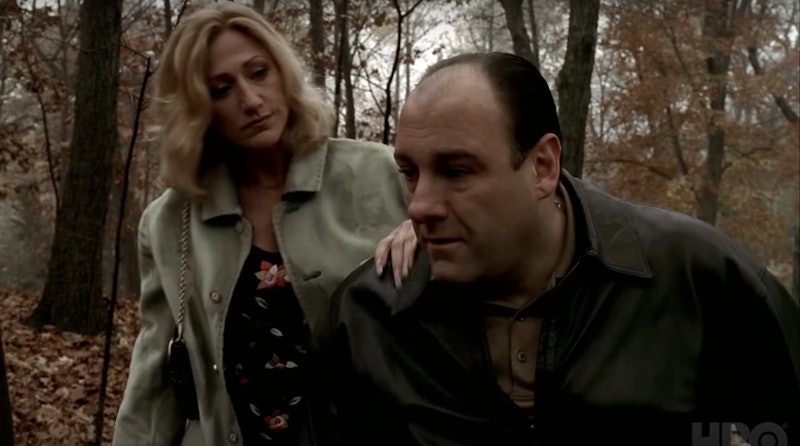 The series premiered a whopping two decades ago, but if you think the cast of The Sopranos must know what the ending means by now, you've got another gabagool coming. (Hey, lucky you. Capicola is delicious.) When some of the stars of the revered TV series spoke with Entertainment Tonight at the show's 20th anniversary event on Wednesday, they did not offer up any inside scoop regarding what did or didn't happen to Tony Soprano at Holsten's diner when the finale abruptly cut to black.

Dr. Melfi may have a lot of answers, but uh, the answer to the big question about Tony S.'s fate is not one of them. Lorraine Bracco told ET, “I’m clueless. I just, people want to know, I have no idea.” Michael Imperioli is in the same boat. “I don’t know what it means,” he admitted to ET. “I don’t know what we’re supposed to take from it. What we saw is what it is. That makes no sense, but that’s how I see it now.”

"There is no answer, but I'd like to believe life went on," Jamie-Lynn Sigler posited. "Think about 'Don't Stop Believin'," but I think it was very indicative of their situation and the reality." Vincent Pastore offered, "People say, 'What happened on the show?' And I say, 'I don't know, figure it out for yourself.'" And Robert Iler told ET, "For me, when the show ended, the show ended."

In an anniversary video feature over at The New York Times, Edie Falco reflected on the show's ending and the moment's enduring legacy. The actor who played Carmela Soprano said,

"So many people say to me about the ending, 'So what the hell was that?' And I'm like, 'I know pretty much what you do.' And they're like, 'I get it, but what really happened?' They yelled 'cut,' and we all went home. That's what happened."

It might've not been the most conventional or tidy conclusion, but Falco appreciated that it wasn't an easy ending. She also noted that there was never going to be an ending that satisfied every viewer, and so, as she told Entertainment Tonight earlier this week, "David Chase did what made him happy, which is, you know, leave a lot of people talking about it."

When speaking with Matt Zoller Seitz and Alan Sepinwall for their book The Sopranos Sessions, Chase touched on the death scene he had in mind. Chase said (via Uproxx),

"I think I had that death scene around two years before the end. I remember talking with [Sopranos writer and executive producer] Mitch Burgess about it. But it wasn’t — it was slightly different. Tony was going to get called to a meeting with Johnny Sack in Manhattan, and he was going to go back through the Lincoln Tunnel for this meeting, and it as going to go black there and you never saw him again as he was heading back, the theory being that something bad happens to him at the meeting. But we didn’t do that.”

Obviously, this is not the scene we saw at the end of the series. Seitz told the A.V. Club that when Chase shared this "death scene" idea he “wasn’t talking about Holsten’s, but an earlier idea that he decided to move away from." Chase told he “changed [his] mind over time” and “didn’t want to do a straight death scene.” And so, that concept that he cooked up two years before the series drew to a close didn't make the cut.

So there you have it. The ending to The Sopranos remains a beautiful mystery. Don't stop believin', and hold on to that baffled feeling.