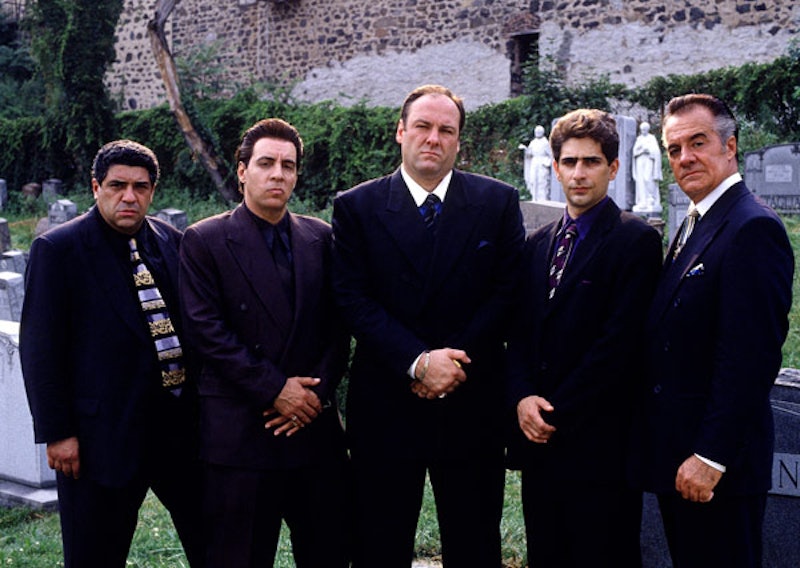 One of the greatest crimes I've committed in my pop culture consumption is that I have never seen The Sopranos from start to finish. I know, I know! It's one of the finest television series of all time and I am doing myself a grave disservice by not getting to know Tony and Carmela Soprano completely. I've seen a handful of episodes, and yes I've seen the finale, but I haven't actually seen the entire series. Dear readers, I am here to rectify this dubious deed. I am finally, halfway through my 28th year on this earth, watching The Sopranos from the pilot to the controversial series finale of The Sopranos. Thankfully I already have a little knowledge of the series going in — for its six seasons, you couldn't open a magazine or turn on an awards show without seeing Tony and his cronies.

I have very little doubt that The Sopranos will live up to all of the hype and praise that is part of the show's legacy. Anything that stars James Gandolfini and Edie Falco together is a guaranteed hit (I couldn't help myself). Like many great HBO dramas, The Sopranos took a genre audiences were already familiar with and flipped it on its head. The Sopranos did for the mob narrative what True Detective (Season 1) did for the cop show. The A.V. Club dubbed the pilot, "one of the most important episodes of television ever." As I write this introduction, I still can't believe I haven't seen the whole series.

Well, things are about to change. Here we go...

2. The Sopranos' House Is Straight Out of RHONJ

Though none of those ladies can hold a candle to Carmela.

From his first glance at the statue in the opening scene, he’s already given us everything about his character... he’s suspicious of everything. In this wonderful homage to The Graduate, we see he might a little naive even if he's the new boss in town, but things are about to pick up very, very quickly.

4. Dr. Melfi Therapist Is No Joke

5. I Could Watch James Gandolfini Feeding & Talking To Ducks For Hours

Is there some sort of director's cut with this feature? I'd buy it.

6. The Framing Of A Typical Family Drama Is Superb

A mother and her teenage daughter fight. A son argues with his mother over a retirement community ("I bought CDs for a broken record!"). A birthday party goes awry. All of this goes on while the danger of the mafia bubbles undernearth. It's really phenomenal writing.

7. Sure Tony, You're In "Waste Management"

And Dr. Melfi doesn't believe it for a second.

9. Who Knew Tony Would Be Such A Jokester?

He makes a finger gun and puts it behind Uncle Junior's head and says, "Don't move!" like a couple of knuckleheads... and vicious murderers.

I would have been just as annoyed.

C'mon man, Christopher Moltisanti put the cocaine on a butcher knife... how did you not suspect he was gonna whack you?

12. I Don't Trust This Priest Fella

Not one bit, Tony!

13. Tony Keeps Going On About How Much He Hates Therapy. But...

His emotional intelligence from his first visit to his second visit grows exponentially and he has a breakthrough about the ducks.

14. There Are Some Borderline Parody Moments In The Pilot

Especially the use of, "Sleeps with the fishes." C'mon.

15. I Was Wondering When A Strip Club Scene Was Going To Happen

Right after the halfway point, FYI. Oh and of course Tony cheats on Carmela. UGH.

No kid or crook is gonna look in your soup. Ron Swanson approves!

17. If I Were To See My Therapist In Public It'd Be Like:

Tony is so casual about it!

18. Carmela With The Rifle Is Incredible

Edie Falco deserved every honor she got for this role.

I would have taken him for a batting cages kinda guy.

And I applaud it. So does Carmela.

21. These Gangsters Are All So Sensitive

Crybabies! All of ya!

Now if you'll excuse me, I have hours and hours of marathon watching ahead of me. I need to get into the right mindset to deal with all of Tony's wrongdoings and his deep emotional core. I just have to order in some f*ckin ziti first.