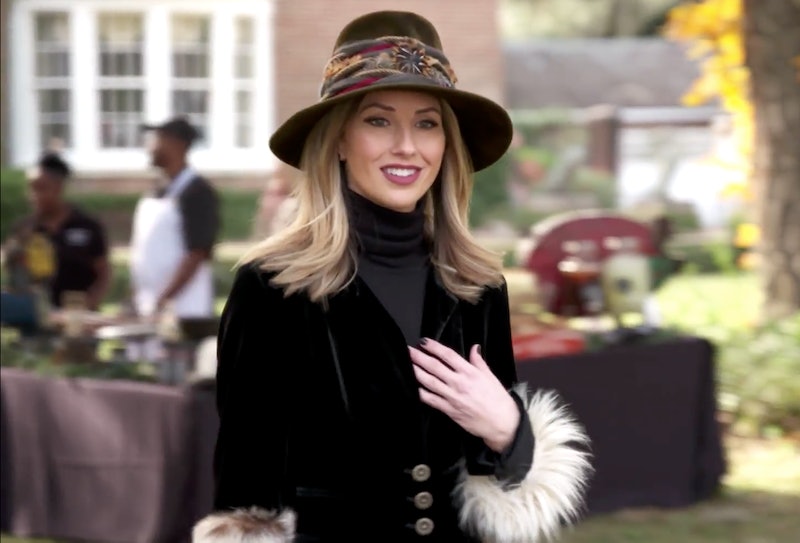 The Charleston, South Carolina group is back and ready for even more drama. The Southern Charm Season 6 trailer dropped on Wednesday and guess what? Not only are Shep Rose, Cameran Eubanks, Craig Conover, Naomie Olindo, Austen Kroll, Chelsea Meissner, Kathryn Dennis, and Eliza Limehouse (she briefly appeared last season) all returning, but so is Ashley Jacobs. That's right, Thomas Ravenel's ex-girlfriend who first appeared in Season 5 and stirred up all kinds of controversy is making her comeback. Of course, the trailer teased Ashley's arrival in the most dramatic fashion possible.

As you can watch below for yourself, in between footage from this season, a car is seen slowly driving up a long driveway accompanied by dramatic music. Eventually, a woman exits the vehicle, but her face isn't immediately shown. Then, as she approaches part of the Southern Charm cast at some type of outdoor event, the woman is revealed to be none other than Ashley.

It's unclear how many episodes Ashley will appear in, but nevertheless, she's certainly causing even more contention. While sitting at a table at at event mentioned above, Cameran says to Ashley, "You called Kathryn an egg donor!" As fans will most likely recall, Ashley did indeed refer to Kathryn, the mother of her two children with her ex-partner Thomas, "nothing but an egg donor."

If her chat with Cameran isn't enough, Ashley even shows up at a party, approaches Patricia Altschul, and says, "Patricia, the truth will come out." Eventually, Ashley is escorted out and tells security, "You don't have to push me." Oh, and then Ashley hops on the phone and declares, "Yeah, I'm calling the cops."

Viewers are probably surprised to see Ashley, especially since Thomas will not be a part of this season, as Bravo confirmed to People in September 2018. News of his exit followed reports that Thomas was arrested and charged with assault and battery in the second degree, as previously confirmed to Bustle by both the City of Charleston Police Department and the Charleston County Sheriff's Office. (Bustle also previously reached out to Ravenel's attorney's team for comment, but did not receive an immediate response.)

As for the sexual assault allegations made against Thomas, his attorney said in a statement given to People in 2018, "My client enjoys a certain degree of fame and unfortunately has become — unfairly — a target for an individual who has, in my opinion, dubious motivations."

Regarding Thomas' arrest, Kathryn says to Craig in the trailer through tears, "If he goes to jail, I'll be a single mom. It's just overwhelming."

Ashley spoke to People last September and expressed interest in returning to Southern Charm. "I wish they had the decency to contact me and give me a chance. Because I would like to have a redemption story, the same way Kathryn did," she said. "I’m not going to fight and I’m not going to play dirty. I’m going to smile and be nice. I never had the chance to do that on the show because I was so wrapped up in Thomas' drama. I was the villain, but people tuned in to watch. I’d like to give viewers the chance to see another side of me."

In November 2018, Ashley revealed she wasn't coming back to the reality series on Instagram, according to People. "After a lot of prayerful consideration, I have decided not to return to Southern Charm next season," she shared. She also added that she didn't want to put her career and loved ones "in jeopardy for a reality TV show," even though she "considered filming again because I desperately want to tell my side of the story."

Well, she clearly changed her mind, because Ashley is very much part of Southern Charm Season 6. Who knows if she was given her "second chance," but fans will just have to wait and see what transpires when the sixth season premieres on May 15.