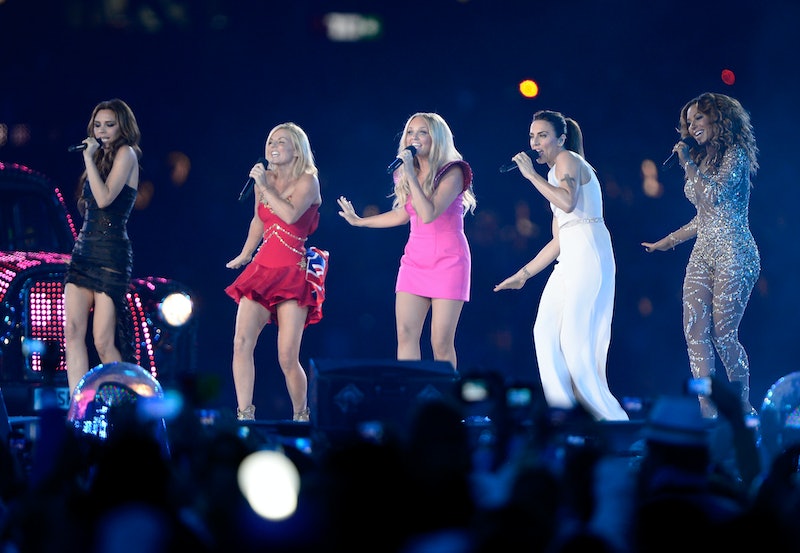 Stop right now, thank you very much. I need somebody to explain exactly what is going on with the Spice Girls this minute! After months of reunion rumours, waiting for the animated movie to arrive (still no date I'm afraid), and news that Victoria Beckham wasn't really feeling a return to live shows, fans of '90s girl power appear to have finally got some concrete info. Apparently a Spice Girls reunion is happening (happy face) but it may not involve all five members (sad face), according to Mel B, anyway.

Speaking during an interview on ITV's Loose Women, Mel B dished the dirt on the band's current status. Essentially, it's complicated. She told the panel: "Definitely. Yeah we are — we are getting back together. We are for sure. We are getting back together. Yes, yes. We are going to start this year and then go on till next year." She then went on to reveal that one of the band members had been holding up proceedings but the other four seemed to have managed to talk her round. "There's one that's been a bit difficult. But she's getting roped in." The singer didn't specify which band mate was being "difficult."

Mel B went on to add that she had stopped "nagging" her fellow band members in an attempt to get them to sign on the dotted line. "I've always said we're definitely touring. I think I've just been nagging them all a bit too much. I stopped nagging and then they all said 'yes'. I shut my mouth."

So far so good, right? I think so, but I'm not going to get my hopes up just yet. As you may remember, earlier this year the five members posed for a photo after meeting up to discuss working together once more. Although they confirmed "new opportunities" were in the pipeline, Beckham formerly Posh Spice, firmly shut down the idea that she would be heading back on tour, in an interview with Vogue.

But despite her friend's reluctance, Mel B has been insistent that all five members are going on tour, telling NBC's Today Show: "We are going to be performing. Finally they've got it together. [Beckham] is always bloody saying that. Stop it! We are touring!"

So do Mel B's comments that a tour is definitely on signal that Beckham has changed her mind since her earlier statement? VB appears to be a very determined woman who knows what she wants. Who would have thought back in the early '00s when she was rocking matching head-to-toe leather looks with David that she would go on to head up her own hugely respected fashion brand? Not me, that's for sure. But she did. Which only makes me think that she won't be doing anything she doesn't really want to do, so I guess we'll have to stand by and wait. Bustle have reached out to Victoria Beckham's team for comment but have not received a response at the time of publication.

There's also the fact that Mel B seemed to strongly suggest she and the other Spice Girls were going to perform at Prince Harry and Meghan Markle's wedding. Victoria Beckham was indeed there, but I didn't spy any of the other Spice Girls. And unless they rocked up at the reception, gave the quietest performance ever, and swore every guest to total secrecy, the evidence suggests it didn't actually happen. Mel C even later spoke out on Australian radio to say they weren't invited to perform, the Daily Mail reports.

But even if it turns out Mel B has been indulging in some wishful thinking, who could blame her? She's just like the rest of us, hoping and praying for a chance to relive the good old days, make girl power great again and maybe, just maybe, shout "Spice Up Your Life" at a packed-out stadium. A girl/woman/Spice Girls diehard megafan can dream, can't she?