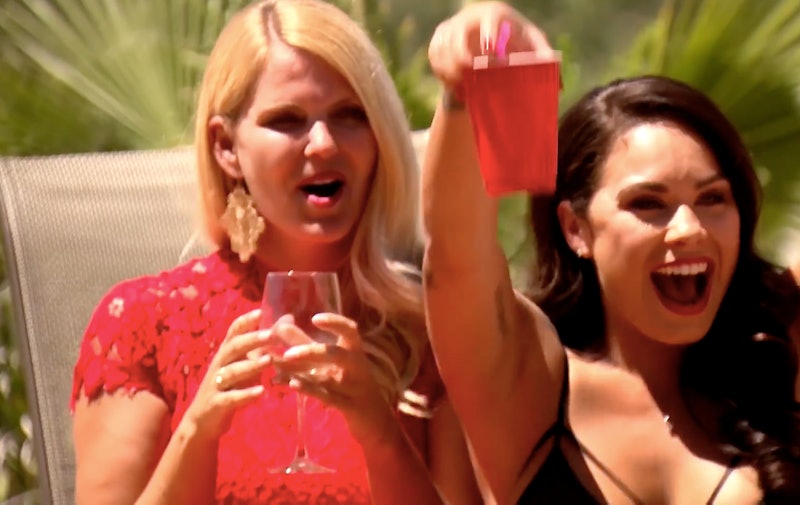 If you've been wondering how reality TV could make falling in love even harder, TLC has the answer. The network's newest series, The Spouse House, will raise the stakes of the usual dating show by challenging the House's residents to get engaged and married by the end of every episode. The cast of The Spouse House will be made up of people who are willing to do literally anything to fall in love and settle down, and the format will be familiar to anyone who watches Bachelor in Paradise. There's a core group of lovelorn folks who have a chance to pair up before new people arrive and unpopular participants are eliminated. However, in this case, instead of reality show veterans, the Spouse House cast are just normal people.

It certainly seems like there's a high risk of these incredibly fast-paced relationships falling apart, but the Spouse House could be inspired by the several successful relationships that have come out of Paradise or by the couples that stayed together after getting Married at First Sight. Now that regular people, not just already existing reality stars, are choosing to sign up for shows like these, maybe meeting in the Spouse House will become a typical way to fall in love. Who knows?

Here's a little more about the men and women who will be putting their faith in TLC to find them a suitable husband or wife.

It's hard to judge from geotags alone, but it looks like Ashley is currently based in Los Angeles, not Chicago like most of her co-stars. Even if Ashley leaves without a relationship, it seems like she fell in love with the location in which the series was filmed. A move could be an affirmation of being single and happy, or the first step in a new marriage, but, either way, Ashley's avocado toasts are indistinguishable from those of a lifelong Angeleno.

Danny is a personal trainer, so most of his Instagram photos are focused on his work. He also has a young daughter, Aubrey Jo, so that might explain why he's had a hard time finding the right person. You have to be serious about a relationship when you have a 1-year-old.

Brianne is clearly outdoorsy and adventurous enough to spend her weekends getting active, and she always leaves time for a drink, whether it's coffee or a cocktail. She's also a cat person, so whoever falls in love with her will also need to fall in love with her two black cats: Wednesday and Gomez Addams.

It's hard not to judge Chris by his TLC bio. As the show explains, "he has dated many women, but they all have lacked the 'it' factor that captivates him." Maybe someone will have that quality on The Spouse House, but it might take a lot to captivate someone who is comparing all of his relationships to his parents' long and happy marriage.

Ashley runs a media company, Kind a Kind, that's all about "the journey together to make kindness badass." It's part blog, part inspirational Instagram feed, and part store — she has a pretty comprehensive selection of merchandise available online — all devoted to the idea of making kindness into a personal brand. If anything is stopping Ashley Lauren from finding love, it might be her schedule. According to Kind a Kind's website, she's "been a model, a TV host, a radio host, a web producer, and... a presenter for [F]ortune 500 companies."

Albert was already married once before, and, according to TLC, he wants his future wife to "accept his children as their own." Usually, people take it slow when they're in a situation like his, but it seems like Albert no longer wants to wait.

Kelli Jo's Instagram is private, so, while she'll be sharing some aspects of her personal life on TV, it doesn't seem like she wants everything she does to be public. According to her TLC video introduction, she's a Southern girl at heart a big sports and wrestling fan, and a conservative Trump voter... but she's willing to give anyone a chance, even someone at the opposite end of the ideological spectrum.

It's a little surprising to see that Tom is on a show like this one. He works a typical job in sales, he volunteers, and he's not much for posting online. Maybe the issue is, as Tom's TLC bio explains, "he is unwilling to settle," so let's see if he's able to find someone that meets his criteria in The Spouse House.

Friends and filters. Those are the major themes of Yesnaya's (or just Naya's) Instagram presence. Some people post selfies with big smiles and long explanations of what they're up to, but that's not Naya's style. Her bio explains that she was cheated on in all of her past relationships, so that might explain why she has such close friendships and why she's a little guarded when it comes to what she posts.

Darren has an Instagram ready for reality show fame: it's public, he posts frequently, he hangs out with friends, meets up with his costars, and already considers himself a "public figure." And he's working on the art of the subtle reality hint. Could this photo between Ashley Lauren and Darren be hinting at a possible romance/marriage between the two? I don't think Darren or Ashley would want to wind up on the wrong side of a non-disclosure agreement, so it's probably platonic, but clearly he stuck around The Spouse House long enough to, at the very least, make some friends.

She can be heard in the season preview saying she's looking to get pregnant right away, so that should be evidence that Toyya is not one to mince words or to waste time. According to TLC, her one true love was murdered, but you wouldn't guess that she's grieving the loss of someone beloved by her lighthearted and entertaining posts.

Jimmy's not a big social media fan, but, from what he has made public, it looks like he's a longtime firefighter and a fan of dogs, both of which should help him make a good impression with the women in the house. According to his TLC bio, Jimmy has been married before, which gives him a slightly different perspective than the rest of the members of the House.

Missy is a doctor, which is already a pretty amazing pickup line, but, specifically, she works in sports medicine for Chicago's hockey team. Unsurprisingly, she credits her crazy work schedule for her lack of a single long term relationship, because there's no doubt that, in a city of sports fans, there are plenty of people who would love to learn more about Missy's line of work and get to know her.

He's slightly older than most of the other cast members, which could help him know what he wants in a relationship. Jonathan's TLC bio says he's been struggling to find a new relationship since his heart was broken seven years ago. While competing for dates and affection might reopen that old wound, maybe the open environment of The Spouse House will be the answer.

With these unique personalities and backstories about to mix, anything can happen.